How long have polar bears – and people – lived around Hudson Bay?

Posted on July 1, 2014 | Comments Off on How long have polar bears – and people – lived around Hudson Bay?

I came across a story in the news yesterday about the discovery of an archaeological site in northeastern Manitoba that brings to mind a post I wrote back in November 2012 on the geological and archaeological history of Hudson Bay.

As I noted then, most of the archaeological sites found on or near the coast of Hudson Bay are about 1,000 years old or less – and this new site fits that pattern perfectly.

A news report at the CBC (June 30, 2014) carried this description of the find, at a site called Hubbard Point, which sounds like it could yield polar bear remains: 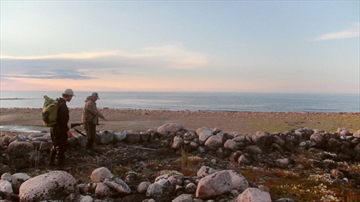 “Today, there are remnants of 22 large tent rings, as well as food caches, burial grounds and kayak rests, all estimated to be about 1,000 years old.

Researchers are heading to the site, just south of the Manitoba-Nunavut border, next weekend to carefully excavate for animal bones and tools in the hope of gaining insight into the lives of the ancient Inuit known as the Thule.

“Our Manitoba coastline is our best-kept secret. We don’t talk about it much and yet we have this very vibrant coastline that has been home to a lot of people over a very long period of time,” said Virginia Petch, the project’s chief archeologist. “We’re hoping that the kinds of structures we find, and maybe some of the tools we find, will help to give us some connection with the High Arctic.”

Petch first stumbled on the site 17 years ago when she spotted the tent rings from the air. She didn’t stay long when she reached the site by foot because a half-dozen polar bears were “surveying us for lunch.”

She was able to determine the settlement was likely to be 1,000 years old, since there was no evidence of metal. The tent rings are huge, she said, almost as though they were made “by giants.” Some tents were positioned in a figure eight, suggesting an extended family lived together.

It was — and still is — a perfect place to hunt and gather food for a harsh winter.

Will the site contain a large number of polar bear bones, like the 8,500 year-old site in eastern Siberia I described last year? Unlikely — but there may be a few.

Read the rest of the CBC story here, and another rendition, from The Hamilton Spectator, here.