Posted on July 1, 2014 | Comments Off on Polar Bear Specialist Group just had another secret meeting

Well, well, well — it looks the Polar Bear Specialist Group (PBSG) just had itself another secret meeting with some extra special guests.

Polar bear scientists and PBSG-approved activists got together a few weeks ago (June 9-13), with no notice beforehand, “to continue discussions how (sic) to solve issues of future capacity.”

This was their “second intersessional members-only meeting in a row” (the first one was in October 2012), but they still haven’t had their regular, now long-overdue, “working meeting.” [they had the last one in 2009].

I came upon a notice about this meeting on the PBSG website, which apparently went up June 26, while looking for something else. There has been nothing about it in the media that I’ve seen.

And guess who were “invited specialists” at this meeting of “members-only,” called “to discuss internal matters crucial for the future functioning and capacity of the group”?

Photo below of the folks at the meeting. The list of participants is here (pdf here). 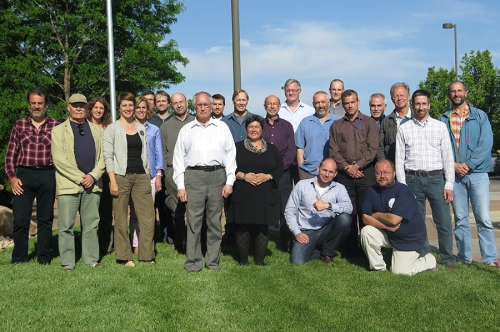 The meeting was touted as not a regular working meeting, and therefore, we cannot expect the usual proceedings volume, with minutes of discussions.

Yet the PBSG made a number of resolutions of the sort usually made at regular working meetings, including some that suggest — after 45 years in existence — they are finally taking some concrete steps toward getting population estimates for polar bears that live in Russian territory. They also decided on how to deal with what has been a contentious issue for them, Traditional Ecological Knowledge (TEK).

And, they also had themselves a secret information session about global warming, which surely has little to do with “issues of future capacity.” Unless — could it be they plan to add climate scientists as full voting members?

However, there was no mention of the new caveats regarding their population estimates which chairman Dag Vongraven sent me a few weeks ago — I guess they’d prefer that to be our little secret for now.

Details below, such as have been published — including the names of the “climate scientists” who attended, although there are no details on what kind of climate change information was conveyed.

“The PBSG had an another intersessional members-only meeting in Fort Collins, USA, in June 2014, to continue discussions about the group’s future in light of the increasing work load related to its role as independent scientific advisers to the five polar bear Range States, or Parties to the 1973 Agreement. There were no invited specialists, except for three climate scientists (Mark Serreze [“sea ice cover is in a death spiral“], Marika Holland and Jennifer Kay), who were invited to perform half-a-day of climate change update, Nikita Platonov, who were invited to present results from recent studies conducted in the Russian Arctic, and IUCN/SSC chair Simon Stuart and Dena Cator from IUCN Global Species Programme.

The main aim of the meeting was to agree on a set of Terms of Reference for the group [some excerpts below], and to discuss internal matters crucial for the future functioning and capacity of the group.

One important issue was to discuss the challenge put forward by the Parties in the Declaration from the Meeting of the Parties in Moscow in December 2013, where the PBSG was “encouraged” to “determine how to best use Traditional Ecological Knowledge (TEK) together with scientific approaches and analyses of polar bear population status for more effective decision-making and consider their recommendation at the 2015 regular meeting of the range states”. This was discussed at length and the group agreed on a statement on TEK.” [my bold, link to Serreze quote added, other links in original]

RESOLUTIONS: Resolutions from the 17th meeting of the PBSG in Fort Collins, USA 2014

1. On national and international support for exchange of scientific personnel and information

2. Support for scientific studies of polar bears in the Russian Arctic

Res#1-2014: On national and international support for exchange of personnel and information
The IUCN Polar Bear Specialist Group
Recognizing that understanding ecological variation among polar bear subpopulations is important to scientific studies and the conservation of the species, and.

Recognizing that best-practices for studying polar bears are constantly evolving, and

The PBSG requests that the Range States and other organizations support national and international exchanges of personnel involved in polar bear research, and support international collaborative study planning and analyses of data on population status and delineation.

Res#2-2014: Support for scientific studies of polar bears in the Russian Arctic
The IUCN Polar Bear Specialist Group
Recognizing that Article VII of the 1973 Agreement for the Conservation of Polar Bears calls for each Contracting Party to “… consult with other Parties on the management of migrating polar bear populations, and exchange information on research and management programs; and

Recognizing that at the 2014 PBSG meeting members learned of significant new work conducted by Russian scientists;

Commends Russia’s recent investment in gathering scientifically rigorous data and other sources of relevant information regarding polar bears within their jurisdiction and shared populations; and

• Enhanced focus on collaborative research across the Russian Arctic as an important first step in closing gaps in existing polar bear population status and trend information;
• Support for publication of Russian polar bear and related research in peer reviewed international journals;
• Translation of Russian language reports related to polar bears and the ecosystems of which they are a part;
• Consultation with relevant external experts in both the design of research and monitoring protocols and where useful, the analysis of data to assure maximum benefit of new independent and collaborative work;
• Continued participation by a diversity of Russian organizations and Institutes who are actively engaged in scientific research or monitoring with the PBSG.

TERMS OF REFERENCE – below are some interesting excerpts from the 2014 PBSG “Terms of Reference“ document (pdf here).