Posted on May 5, 2015 | Comments Off on Designated critical habitat for Alaskan polar bears offers no protection from thick spring ice deaths

The Obama administration is apparently attempting to overturn a previous ruling that rejected proposed Alaskan “critical habitat” for polar bears in 2013 – as if “critical habitat” would protect the bears from the repeated episodes of thick spring ice that develop in this region every 10 years or so. 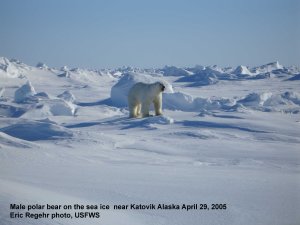 “Seeking to reverse a ruling throwing out its designation of critical habitat for polar bears, the Obama administration has defended its decision to list large swathes of the Arctic as necessary for the conservation of the threatened species.

A coalition of oil industry groups and Alaska Natives, represented by Stoel Rives and Holland & Hart, successfully persuaded the U.S. District Court for Alaska to vacate the government’s polar bear habitat designation in 2013.” [my bold]

If they succeed, it would put most of the north coast of Alaska under special ESA rules, as the map below shows (click to enlarge).

As I commented previously, regarding the Obama administration’s recommendation to congress that they approve a proposed Arctic wildlife refuge area on Alaska’s North Slope, this move (if implemented) would not protect polar bears from the starvation deaths due to thick spring ice conditions that have occurred in this region for 2-3 years out of every 10 since 1960 at least.

The other issue is how much additional, biologically meaningful protection a critical habitat designation would provide for Southern Beaufort and Chukchi Sea polar bears – over and above that already provided by the Marine Mammal Protection Act.
END_OF_DOCUMENT_TOKEN_TO_BE_REPLACED