Posted on July 21, 2015 | Comments Off on Alarm over future summer polar bear habitat disguises how good conditions are right now

Despite the public outcry last week over future polar bear survival, the polar-bears-are-doomed crowd can’t hide the fact that this year, spring sea ice habitat for polar bears worldwide has been excellent. 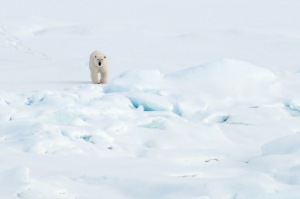 This year on 19 July, for example, Hudson Bay had greater than 150,000 square km more sea ice than there was in 2009 on that date (526.2 vs. 368.5 mkm2)(1992 was a particularly cold year and most bears left the ice as late in 2009 as they did in 1992).1 Conditions have also been excellent for pregnant females around Svalbard – Norwegian polar bear researchers recently reported a good crop of cubs this spring.

All this means that recent summer ice melt has not impinged on the spring feeding period that is so critically important for polar bears. So much ice left in early summer means there was lots of sea ice in the spring (April-June), even in the Southern Beaufort Sea.

The only region with sea ice coverage well below the last five years is the Chukchi Sea (see plots below, click to enlarge). So why aren’t we hearing the-sky-is-falling stories about Chukchi bears? Because biologist have already demonstrated that polar bears in the Chukchi do very well even with no summer sea ice. 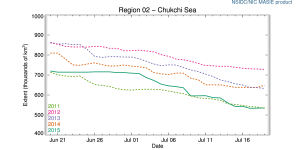 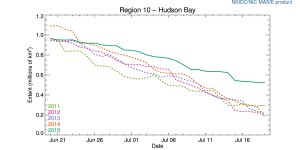 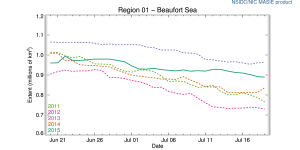 A summer fast is normal for polar bears – that’s why they put on hundreds of pounds of fat during the spring feeding period, when young seals are plentiful and easy to catch. Over-feeding in the spring in preparation for a summer fast is something other mammals don’t do but that’s because no other habitat is quite like the Arctic.

Polar bears may not have a “special” physiological mechanism for dealing with their summer fast (aka “walking hibernation”) but they don’t need one: they just eat so much in the spring that they can live off their fat over the summer.

Polar bears don’t feed much during the summer, whether on land or on the ice – summer sea ice declines predicted for the future cannot possibly have any significant impact for otherwise healthy bears. The record-breaking low September ice extent in 2012 demonstrated that fairly decisively – 2012 was not a bad year for any polar bear subpopulation.

Even though ice was late reaching Svalbard denning areas in the fall of 2012, apparently most pregnant females simply went further east to Franz Josef Land until conditions improved. Ultimately, they managed just fine.

Polar bears are at their lowest weight in March and their highest in June/July. What other large mammal has that pattern? But then, no other carnivore lives on the surface of the sea ice. Summer is warm across the Arctic, relatively speaking. It’s the perfect time for polar bears to fast, as little energy is needed for keeping warm, especially if they don’t swim around.

Most of the polar bear population declines that have been blamed on summer ice declines were actually caused by thick spring ice conditions that limited their essential intensive feeding.

The polar doomsayers can wring their hands all they like about their prophesies for the next few decades but that does not change the fact that this year, and for almost every year since 1979, polar bears worldwide have had all the ice they needed during the spring (except for the years they had too much).

Footnote 1: According to Cherry et al. 2013. Other methods, and other authors, give different results, in various other papers. See this post: When was the earliest ice breakup year for Western Hudson Bay polar bears

Postscript: Polar bear biologist Andrew Derocher has finally responded to my twitter request to let us know where the collared females in his Hudson Bay study are right now (they are tracking both Southern and Western Hudson Bay bears but he has only ever informed his twitter followers about WHB bears).

His answer implies that many of the bears may be swimming and thus not registering with the satellite. Swimming for almost two weeks? I don’t think so.

The fact is, 7 out of the 9 bears with collars are still out on the Bay, on what looks like “ice that doesn’t exist.” [ice with melt ponds on top that satellite algorithms interpret as open water]

Compare the map Derocher posted 20 July (below right) with the one he posted two weeks ago on 6 July (below left, click to enlarge). Notice how he cuts the southern portion off the map – that’s where most of the ice is right now (see Hudson Bay map above): 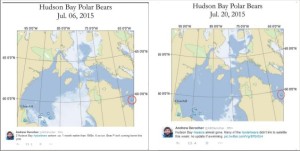