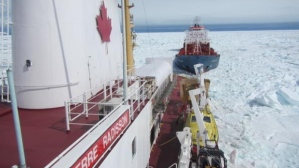 [original caption for the above photo: “The CCGS Pierre Radisson escorts the oil tanker Havelstern to Iqaluit July 17. Tough ice conditions in area have delayed this summer’s annual resupply, and have now derailed the CCGS Amundsen from its carefully planned summer research program.”]

That would be 1992 they’re talking about, the cold year that everyone blamed on the eruption of Mt. Pinatubo. Unfortunately, there are no good detailed ice maps from 1992 (see previous post here). What’s the excuse this year?

CCGS Amundsen is an icebreaker that is usually released from duty to serve as an Arctic research vessel in the summer. And who’s on board? GEOTRACES 2015 Arctic Expedition out of the University of British Columbia with a plan to study (in part) global warming caused “ocean acidification.” Their short blog post shows a map without ice and not a hint they see the irony of the situation.

Here’s the ice they’re talking about (from the Canadian Ice Service), with the communities mentioned in the study marked:

From the CBC story:

“A carefully planned, 115-day scientific expedition on board the floating research vessel, the CCGS Amundsen, has been derailed as the icebreaker was called to help resupply ships navigate heavy ice in Hudson Bay.

“Obviously it has a large impact on us,” says Martin Fortier, executive director of ArcticNet, which coordinates research on the vessel. “It’s a frustrating situation.”

During the summer, the Amundsen operates as a floating research centre with experiments running 24 hours a day. This year it was scheduled to reach North Baffin Bay.

But the icebreaker has been rerouted to escort commercial ships en route to resupply communities in Northern Quebec on the eastern side of Hudson Bay.

Johnny Leclair, assistant commissioner for the Coast Guard, said Tuesday conditions in the area are the worst he’s seen in 20 years.

Leclair did say there should be two more icebreakers headed to the Arctic in the next week, which should free up the Amundsen to return to its scientific mission.” [my bold]

Yet, only two days ago polar bear biologist Andrew Derocher assured his twitter followers that the ice on Hudson Bay was “almost gone” (click to enlarge):

Worst ice conditions in 20 years on Hudson Bay makes me remember an earlier story from this spring, when the ice was the worst in 10 years east of Newfoundland through the Strait of Belle Isle and along the north coast (where polar bears are often seen in April), also requiring ice breaker assistance (Fogo Island marked below on the map, click to enlarge):

“Canadian Coast Guard ice breakers are heading to the Strait of Belle Isle and the waters between Fogo Island and Change Islands, as ferries remain unable to move in heavy ice in the Atlantic Ocean.

The CCGS Ann Harvey began travelling to Blanc Sablon Tuesday to lead the MV Apollo across the heavily-iced Strait of Belle Isle [between Newfoundland and Labrador].

“The ice on the northeast coast is coming down from Labrador and [over] the last couple days we’ve had a couple of large storms rolling through, so that’s been pushing the ice along the coast which is causing a lot of pressure,” said Rebecca Acton-Bond, Coast Guard’s acting superintendent of ice operations with the Atlantic region.

An icebreaker was also requested for the area of Fogo Island, Change Islands and Farewell, as the MV Captain Earl Winsor ferry is unable to make the run.

In the interim, the Department of Transportation and Works has arranged for a fixed-wing plane to transport people back and forth between Gander and Fogo Island.

Rebecca Acton-Bond, with the Canadian Coast Guard, says there is more pressure in the ice this year than in 2014.”

A helicopter will operate on a load-and-go basis between central Newfoundland and Fogo Island, Change Islands and Farewell, weather permitting.

A number of tankers are also waiting for the assistance of an icebreaker; however, the icebreaker is also struggling because of the pressure of the ice build up.