Posted on August 5, 2015 | Comments Off on Long underwater stalk by polar bear shows how hard it is to catch seals in summer

The longest-ever-recorded underwater dive by a polar bear, stalking three bearded seals, shows in striking fashion how truly difficult it is for a polar bear to catch a seal from summer sea ice. After the long dive, the bear (see below screen capture) erupts from the water to try and take the seal resting on the ice but it escapes.

The paper reporting this dive, by Ian Stirling and photographer and Arctic expedition organizer Rinie van Meurs, has hit the news again in a big way, as it finally appeared in print. I wrote about it in June here, when it came out in press. The video was shot on 19 August 2014, at the height of the Arctic summer (July, August, September).

CBC Radio posted the video and interviewed  van Meurs yesterday (“As It Happens” 4 August), in which he reportedly made this astonishing statement:

“…after 27 years working, I have seen clearly changes in the sea ice. I don’t need to see the NASA records and graphs and all that.”

Indeed, who needs science and all that? You just have to look out the window of your ship! Anecdotal reports are what count as evidence to people who are not scientists. Van Meurs, who is not a scientist, is who the media gets to interview. Where’s co-author Stirling, the scientist?

More stills from the van Meurs video below – too bad, so sad, the bear gets no seal. Why polar bears eat little in the summer even if they are out on the ice hunting, as I discussed here. 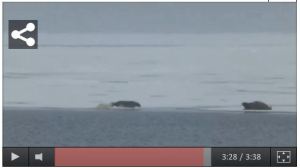 And…the seals both escape. Not such a surprise: 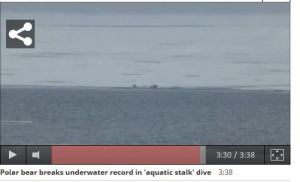 Bearded seals and young of the year ringed seals are likely all that the bears have to hunt in the Barents Sea at this time of year because all other age classes of ringed seals are off in open water feeding. Young ringed seals hang out near the ice edge and feed from there.

Abstract
The maximum dive duration for a wild polar bear (Ursus maritimus) of any age is unknown, and opportunities to document long dives by undisturbed bears are rare. We describe the longest dive reported to date, by a wild undisturbed adult male polar bear. This dive was made during an aquatic stalk of three bearded seals (Erignathus barbatus) lying several meters from each other at the edge of an annual ice floe. The bear dove for a total duration of 3 min 10 s and swam 45–50 m without surfacing to breathe or to reorient itself to the locations of the seals. The duration of this dive may be approaching its maximum capability. Polar bears diverged from brown bears (Ursus arctos) about 4–500,000 years ago, which is recent in evolutionary terms. Thus, it is possible that the ability to hold its breath for so long may indicate the initial development of a significant adaptation for living and hunting in its marine environment. However, increased diving ability cannot evolve rapidly enough to compensate for the increasing difficulty of hunting seals because of the rapidly declining availability of sea ice during the open-water period resulting from climate warming.