July 2015: all 13 collared polar bears in the Southern Beaufort are out on the sea ice

Most of these bears are close enough to shore to hit the beach if that’s where they wanted to be but they’re on the sea ice.

I’ve been posting these USGS tracking maps for two years.1  The map archive at USGS goes back to December 2009.  Seeing all animals on the ice in July is usual for Southern Beaufort polar bears.

During August, a few of these females usually come ashore (see here and here), probably because they plan to den there later. But most polar bear females stay out on the ice, no matter how far it contracts into the Arctic Basin. Only about 5% of SB bears spend time on land during the summer.

See the July track map below and some sea ice maps and graphs for the region.

Figure 1. Original caption: “Movements of 13 satellite-tagged polar bears for the month of July, 2015. Polar bears were tagged in 2014 and 2015 on the spring-time sea ice of the southern Beaufort Sea. All 13 of these bears have satellite collar transmitters. Polar bear satellite telemetry data are shown with MODIS imagery from 23 July, 2015.” US Geological Survey. Click to enlarge.

Note that the circles with the polar bear icons are the end points (final positions for the month), while the tail ends of the strings are the positions at the first of the month. Compare to last month here and July 2014 here.

Sea ice extent in the Southern Beaufort overall is somewhat lower than last year but still much higher than 2012 (Fig. 2). There is still ice offshore (over the shelf) that is thick enough for hunting, for persistent bears lucky enough to catch the odd seal (Fig. 3), but most bears won’t eat very much – they’ll live off their fat just like any bears onshore. 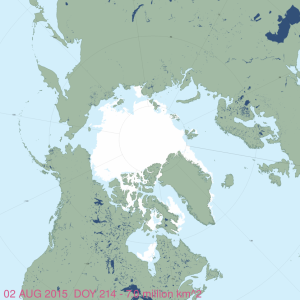 Footnote 1. This is the July 2015 follow-up to my post on the July 2013 track map for female polar bears being followed by satellite in the Beaufort Sea by the US Geological Survey (USGS) – “Ten out of ten polar bears being tracked this summer in the Beaufort Sea are on the ice.” See that post for methods and other background on this topic, and some track maps from 2012 (also available at the USGS website here).