Posted on August 12, 2015 | Comments Off on Hudson Bay ice update – researchers awfully quiet about what polar bears are doing

This year 225 thousand km2 of sea ice remained on Hudson Bay at 10 August compared to 96 thousand km2 in 2009, the last late breakup year for which there are detailed ice maps and polar bear data.

In 2009, most Western Hudson Bay polar bears were onshore by 22 August, just after the very last remnants of ice disappeared (see map below). This year? The remaining ice is further east, in Southern Hudson Bay territory.  Last report from a few weeks ago showed some Southern Hudson Bay bears came ashore early but past behavior suggests some bears will wait until the bitter end before they come ashore – until the very last remnants of ice disappear (Cherry et al. 2013).

Western Hudson Bay bears are unlikely to be quite as late onshore this year as they were in 2009 because of the way the ice melted, discussed here, but that remains to be seen.

The last report on Southern and Western Hudson Bay bear locations (onshore vs. on the ice) was from the 20th of July, from a Polar Bears International blog post and an Andrew Derocher tweet. Last Churchill bear report was two weeks ago.

Kelsey Eliasson over at Polar Bear Blog had this to say a few days ago (8 August):

“When it comes down to it, there’s no real way to spin this year as a bad year for Hudson Bay. The bears of western Hudson Bay have had the toughest season of the three population in the bay and they still had a very nice hunting season. Its really looking more and more like this population could not just be stable but increasing…”

Sea ice coverage at Day 222 (10 August) 2009 below and 10 August 2015 below that (click to enlarge), courtesy NSIDC Masie. Notice how much further east the ice is this year and how much more ice there is in Foxe Basin (in the north): 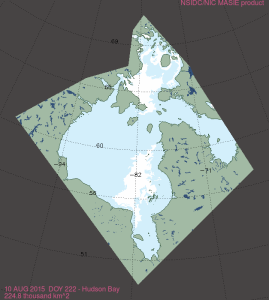 See the how much ice there was remaining at Day 232 (20 August) 2009 below – two days before most bears came ashore. Will the ice this year last another 10 days? Time will tell.