Posted on October 21, 2015 | Comments Off on Winter returns to the Arctic – freeze-up 2015 at October 20 expands polar bear habitat

Fall is the season when polar bears that have spent the summer fasting can return to the refreezing sea ice to resume successful hunting. For polar bears, fall is the second-most important time of year for hunting, after spring. 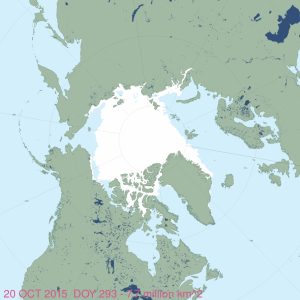 The date when freeze-up occurs across the Arctic varies from place to place and year to year, but the process is well underway this year. The US National Snow and Ice Data Center’s MASIE map for 20 October 2015 (above) shows 7.7 mkm2 of sea ice, up from the annual low of 4.41 mkm2 almost 6 weeks ago.

Conditions in the Canadian Arctic are progressing nicely (below, 21 October 2015). Unusually, according to the Canadian Ice Service (CIS), ice is already forming in Foxe Basin (north of Hudson Bay) and off southeastern Baffin Island (west of Greenland).

Barents Sea polar bears are not so lucky: according to the Norwegian Ice Service, conditions this fall are similar to 2013, when pregnant females that usual den in eastern Svalbard appeared to choose Franz Josef Land for denning (or pack ice) because ice had not formed early enough in eastern Svalbard. In other words, they adjusted their behaviour. 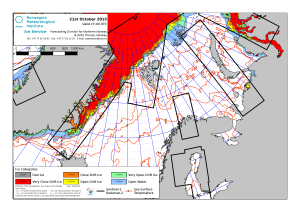 Fall development of Beaufort Sea ice, however, is well above recent years; other regions are doing better than some years but not all (see all plots here). 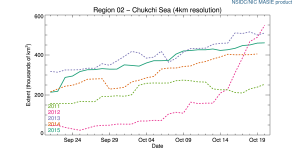 According to the NSIDC interactive sea ice graph, freeze-up is further along for this date than 2007 and 2012 (below), among others:

No need to panic about polar bears again this year.