Posted on January 18, 2016 | Comments Off on The old ‘website revision’ excuse for not updating polar bear status changes

Apparently, the IUCN Polar Bear Specialist Group (PBSG) thinks that it’s OK to mislead the public on the conservation status of polar bears for half a year because its website is being revamped. This conservation organization is of the opinion that people landing on their website while searching for official polar bear status information don’t need to know right away that a new IUCN Red List document was published in November 2015. We know this because the message below appeared on the PBSG homepage 14 January 2016 (text in bold was there previously: the new message is in CAPS), screencap of entire page at 16 Jan 2016 pdf here:

It appears that the PBSG feels that the public can wait to be told about 2015 Red List decision until the PBSG are ready for them to be told, which could be anywhere from March to the end of June 2016, depending on what definition of “spring” they use. Anyone (like moi) suggesting this tactic is paramount to withholding unpleasant information is just being “impatient.”

Decide for yourself but to me, this PBSG message speaks volumes: it says the 2015 IUCN Red List assessment is bad news for polar bear predictions of gloom and doom. Polar bear specialists don’t want to talk about it because it is a slap-down of all previous attempts at predicting a grim future for the bears (see the summary at the end of this post).

Back in late December, I pointed out the fact that major conservation organizations, including the PBSG, had not yet mentioned the details of the new 2015 Red List assessment for polar bears – a full month after it had been published. No response to that post from the PBSG or anyone else. Almost another full month later, the situation hasn’t changed except that the PBSG implies they haven’t done this because they’re in the middle of a website upgrade.

Well, yeah – except the document the November 2015 decision was based upon was submitted by PBSG authors back in June 2015, so they knew this decision was coming months before it was made public. And why didn’t the message posted on 14 January 2016 not go up in November 2015, or whenever the website upgrade began?

Instead of an excuse, why could they not have simply posted a link in their “News” section to the 2015 Red List polar bear page? Something like this would suffice:

Actually, the time stamp of 14 January for this “…be patient” message is telling because that’s the day I sent a twitter query (see below), to PBSG member Andrew Derocher, the IUCN Red List, and CBC journalist Reg Sherren (sent after a tweet to the PBSG Chairman Dag Vongraven 10 days before that generated no response). In fact, I got no response to the 14 January tweet either – however, the website notification copied above appeared later that day. I discovered it when I checked the site (which I now do routinely) two days later. 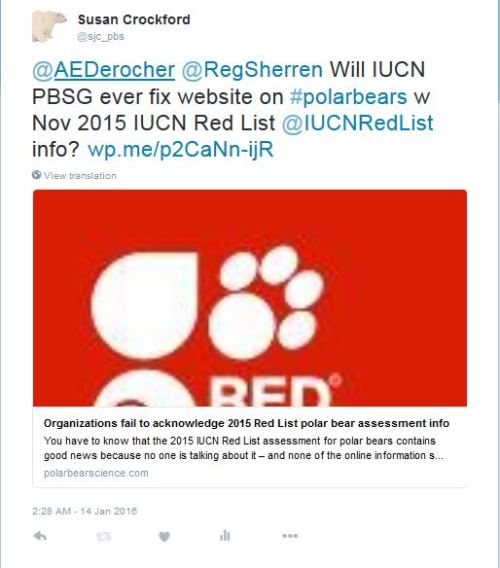 Similarly, someone called Bob at the Encyclopedia of Life (EOL) Help desk replied on 14 December 2015 to my email informing them of the 2015 Red List decision and its impact on their polar bear facts page (which is highlighted by Google):

We are in the process of updating our data feed from IUCN, which will import the new content into EOL for distribution to all of our data users.

That EOL ‘fact box’ at 16 January 2016 (below) still appears as it did in December: it’s one of the results I get when I Google “polar bear.” The 2015 IUCN Red List says the population trend for polar bears is “unknown” – NOT “decreasing” as shown in this box: 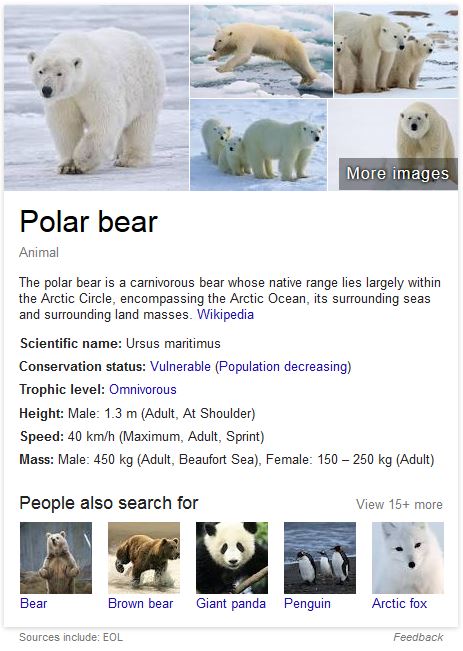 For all its flaws (including the continued deceptive focus on summer sea ice), this Red List update is the most statistically robust, in-depth study of the conservation status of polar bears – it was truly peer-reviewed (i.e., by experts outside the PBSG, which the document supporting the previous (2006) IUCN Red List assessment was not) and contains an explicit and prominent estimate of possible error, which previous predictions have not.

Why is this document being ignored, especially by the conservation organizations people turn to for information about polar bears online?