Horse killed by a polar bear in southern Greenland this week

Posted on February 19, 2016 | Comments Off on Horse killed by a polar bear in southern Greenland this week

“Until Wednesday, Malik Frederiksen owned nine horses at his property in southern Greenland. After an attack by a polar bear, he now owns eight.”

So begins an article published in The Arctic Journal yesterday (18 February) about more problem bears onshore in mid-winter. But this time, the location is the south-west tip of Greenland and this time, the polar bear killed something before it was shot. It could just as easily have been a person.

In addition, according to this report, this is the second time in two days that a polar bear has been shot onshore in Greenland because it got too close for comfort.

It’s also the second report in as many weeks of multiple polar bears onshore causing problems in the middle of winter – the other reports were from southern Labrador in late January/early February.  This is a new pattern: it’s different and it means something.

The Arctic Journal report implies that these recent Greenland episodes are just like the incidents that happen in summer, when polar bears come onshore during the ice-free period and cause problems for local communities.

But the timing of these incidents make them fundamentally distinct: as far as I have been able to determine, multiple polar bears onshore in mid-winter in these regions is extremely rare or unheard of in recent memory (the odd sighting nearby, perhaps – but not bears prowling within communities).

The first seal pups won’t be born in off Labrador and NE Greenland for another 2-3 weeks at least. Until harp seal females start hauling out on the ice in preparation to give birth, hunting seals will be hard work for polar bears.

So, are these onshore bears desperately hungry or are they a bit hungry and a bit bored, waiting around for seal pups to arrive? None of the reports from Greenland or Labrador have given any details on the sex, age, or condition of the bears involved, which would give us a better idea of why they are coming ashore at this time.

So far, we’ve had at least one person blame it on climate change but that’s a lazy man’s explanation. Reduced sea ice in summer does not explain bears onshore in the middle of winter. Slightly lower overall sea ice extent should not be a factor either because there is still plenty of sea ice around. [see this comparison of scale] Why would a polar bear chose to wander around southern Greenland, which has minimal ice at this time of year, when there is abundant ice further north?

Larger populations are a logical explanation for these winter incidents – not just a few more bears but a hell of a lot more bears. It shouldn’t surprise anyone that restricted hunting (or outright bans on hunting), which have been in effect for 40 years or more, have resulted in polar bear populations becoming larger. That was the whole point.

In addition, these modern bears are also likely much less wary of people than they were 50 years ago, when they were routinely hunted.

Here’s what Ian Stirling said about polar bear conflicts back in 1974:

“Dr. Stirling felt that complete cessation of hunting, such as exists in Norway, may increase bear-man conflicts. Dr. Reimers replied that the careful harvesting of polar bears was probably desirable, but the total ban now in effect was largely an emotional and political decision rather than a biological one. Last year four bears were killed in self-defense.” [my bold]

Bears onshore in winter in other areas

Back in 1597, William Barents and his crew had trouble with many polar bears on shore from early February onward – but that was before polar bear numbers in the Barents Sea had been decimated by wanton over-hunting. [Davis Strait polar bear numbers were also devastated by the hunting done by whalers in the late 1800s and early 1900s and it’s taken them about 100 years to recover]

In 2013, there were reports from St. Lawrence Island (in the Bering Sea) of polar bears vandalizing empty whaling camps and cabins over the winter. Bears in this subpopulation (Chukchi Sea) were recently shown to be in good physical condition and reproducing well – both signs of a stable or increasing population (although no counts are available). 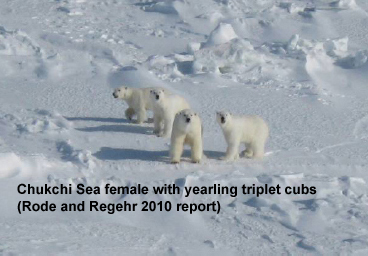 But otherwise, reports of bears onshore causing trouble in Arctic communities in the winter are so rare they don’t show up in the news or in published reports (that doesn’t mean such incidents don’t exist, only that they may not be get reported beyond local communities). I’d like to hear about them if you know of any.