Posted on April 19, 2016 | Comments Off on Most Beaufort polar bears swim from ice floe to floe during breakup, study shows 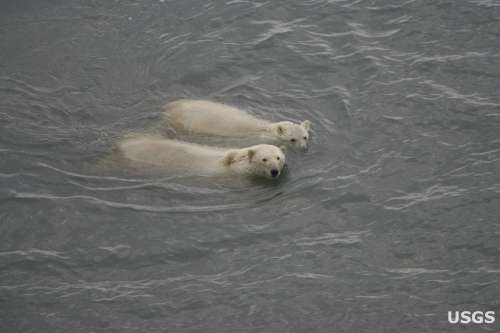 You may have seen the headlines in Canadian news outlets over the last 2 days.
“Polar bears swimming farther as sea ice recedes, study shows”

Oddly, none of the above news reports said where the paper was published or mentioned the name of the lead author – only University of Alberta co-author Andrew Derocher was interviewed (see the only press release I could find here, issued by the San Diego Zoo where the lead author is now employed).[update: CBC ran another story a day later that corrected these omissions]

But what did the study actually say?

Significantly, no bears died while swimming during the two lowest sea ice extent summers since 1979 and no evidence was presented that swims were “particularly hard on mothers with young cubs.” The quotes from the paper below sum it up for Beaufort Sea (BS) bears (the inclusion of Hudson Bay (HB) bears in this study seems gratuitous and potentially misleading, since only a few swam anyway – only 15 out of 59):

So, despite what may be implied during media moments, Beaufort Sea polar bears were  not frantically trying to reach the sea ice from land so that they could attempt to keep feeding over the summer – most of their swimming was done during breakup in July and August from one bit of pack ice to another and they showed no evidence of harm from doing so. Map from the study and more quotes below. 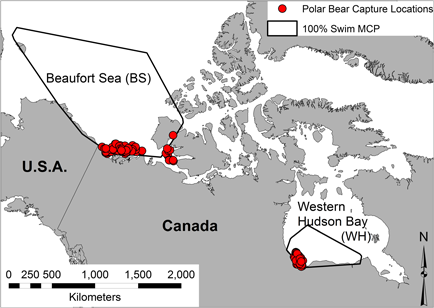 Researchers Nicholas Pilford and colleagues (including Derocher) looked at summer swimming data from 76 polar bears fitted with collars and ear tags from the Eastern Beaufort Sea in 2007-2012 and combined them with data from Western Hudson Bay bears. Most Beaufort Sea bears spend the summer on the sea ice while all Hudson Bay bears spend the summer onshore, making this a particularly odd coupling.

Not surprisingly, the Hudson Bay data were unimpressive. However, no Beaufort Sea bears died as a result of swims undertaken between 2007 and 2012, even in 2012 when summer sea ice was the lowest it has been since 1979 or in 2007, when the summer ice was second-lowest. No evidence is presented in the paper of any harm or ill-effect of swimming the distances required.

“During the open water period in the BS, some polar bears take refuge on land, while the majority follow the retreating pack ice (Amstrup et al. 2000, Schliebe et al. 2008). In the BS, swims were more frequent than HB, and most started and ended in the pack ice. Results suggest that swims in the BS are primarily related to polar bears following the pack ice edge as it retreats. During spring, polar bears of the BS preferentially hunt seals in active ice, selecting for areas near the shorefast ice boundary (Pilfold et al. 2014).

As sea ice begins to breakup, polar bears may try to extend their time over the continental shelf where seal densities are highest (Stirling et al. 1982, Frost et al. 2004). During breakup, sea ice becomes more fractured and mobile, and polar bears likely have to swim between floes more frequently. Remaining on the sea ice throughout the summer months may yield positive energetic benefits for BS polar bears, either through increased encounters with seals resulting in kills during summer (Derocher et al. 2002), or by gaining earlier access to seals in autumn when the pack ice moves back over the continental shelf.” [my bold]

Each of these measurements varied somewhat depending on the configuration of the shoreline, but in 2008 the ice edge was definitely the furthest away than in all other years back to 1979. However, the largest number of long-distance swimming events took place in 2009, when the ice edge in this region was about the same distance offshore as in 2005 and 2006.

The longest swim was recorded in late August/early September of 2008 at a point where the sea ice was >500 km offshore: a female with a yearly cub swam 687.1 km in just over 9 days, as described in detail by Durner et al. (2011). This bear was one of only two individuals in the Pagano et al. study described here that swam from land to the main pack ice edge; after a few weeks meandering around at the edge of the pack ice, this bear then walked back to shore on the rapid-forming ice, arriving on land at the end of October. The second longest swim (366.0 km) was recorded in 2005, when the pack ice edge was about the same distance offshore as in 2009.

Pagano et al. conclude: “we show that both adult female polar bears and their dependent young possess an ability to swim long distances.” They also state that “most of the long-distance swimming events that we identified involved bears swimming from unconsolidated sea ice to the main pack ice or to land.” In other words, few swims recorded were from land to sea ice, indicating that during the open water season, most southern Beaufort and Chukchi Sea polar bears are on the sea ice, not on land — a point also made by Durner et al. (2011).

In addition, the results of this study suggest that despite there being little or nothing for female polar bears and their cubs to eat on shore during the late summer months in the southern Beaufort Sea, the few bears that remain on shore are apparently not so hungry that they are undertaking long-distance swims to the pack ice to relieve their fast, although they appear able to do so.

Despite an overall decline in September sea ice levels between 1979 and 2010, this study found no significant correlation between increased long-distance swims and increased amounts of open water in this region over time. [Archived 12 June 2012]”

A study undertaken by scientists from the University of Alberta and Environment and Climate Change Canada to understand swimming behavior in polar bears is showing an increase in this behavior related to changes in the amount and location of summer sea ice. Lead author Nicholas Pilfold, now a post-doctoral fellow at San Diego Zoo Global, said, “the pattern of long-distance swimming by polar bears in the Beaufort Sea shows the fingerprint of climate change. Swims are occurring more often in association with sea ice melting faster and moving farther from shore in the summer.”

The study, published in Ecography, was accomplished using satellite linked telemetry tracked polar bears from the Beaufort Sea and Hudson Bay populations. Results of the study show an increase in long-distance swimming associated with climate-mediated reductions in sea ice. In 2012, 69% of the tracked adult females in the Beaufort Sea swam more than 50km at least once, the same year in which Arctic sea ice hit a record low.

“Recent studies indicate that swimming may be energetically costly to polar bears.” Said Nicholas Pilfold, “Given the continued trend of sea ice loss, we recognize that an increased frequency in the need to engage in this behavior may have serious implications for populations of polar bears living around the Arctic Basin.”

Swimming frequency and distance varied between individual bears and showed differences dependent on age, sex, body size and geographic features of the region. Swims of greater than 50km occurred more frequently in the Beaufort Sea than in Hudson Bay. Researchers noted that females with young cubs tended to swim less, likely to avoid submersion of youngsters in cold waters, while lone subadults swam as frequently as lone adults. The longest recorded swim in the study was by a subadult female who travelled over 400 km in 9 days.”