Three highly informative journal articles on the phenomenon of ice entrapment of narwhals and beluga are open access documents that reveal some fascinating details of such incidents, including polar bear predation on trapped whales. h/t T. Nelson

Here is a wonderful description of how ice entrapment of narwhals occurred in the early 1900s in Disko Bay (Porsild 1922:8):

“A peculiarity of ice conditions in Disko Bay, on the west coast of Greenland, is that the ice instead of first freezing over the bay at the heads of the fiords on the approach of winter and gradually spreading seaward, first forms late in December, when the drifting ice of Baffin Bay approaches the coast. The weather then becomes quiet, with intense cold, and ice rapidly spreads over Disko Bay from the islands near its opening inward toward its head.

“Then it often happens,” to quote my article explaining the cir- cumstances in the Geographical Review (vol. 6, pp 215-228, September, 1918), “that schools of white narwhals are cut off from the still open parts of Baffin Bay, and are gradually driven in towards the head Disko Bay. Freezing continues, and finally the schools are restricted to the last smaller or larger open spaces in the ice, whence they cannot escape unless the weather changes and the ice is broken.”  [my bold]

“The phenomenon has been known from Greenland for centuries (Egede 1788) and is termed among Greenlanders as ’sassat’ (previously spelled ’savssat’), which means ’something that is being served’. The most famous ’sassat’ took place in Disko Bay in January 1915 and involved at least 1,000 narwhals that were trapped in heavy fast ice (Porsild 1918). In Disko Bay particularly, there are several other reports of ice entrapments involving considerable numbers of whales: 1955 about 3,000 belugas (Golodnoff 1956), 1968 about 600 belugas and narwhals, and 1970 about 1,000 belugas (Siegstad and Heide-Jørgensen 1994).”  [my bold]

Exactly the same thing happens in Pond Inlet but in early fall rather than winter. Here is what the layout looks like for Pond Inlet and Disko Bay. In both places, there is a bay or inlet protected by a large island offshore, exposed to pack ice moving down Baffin Bay:

Sea ice in Baffin Bay forms in the north in early fall (October) and moves south as fall turns to winter. Pond Inlet, being further north and on the west side of Baffin Bay, ices up early in the season, while Disko Bay does not freeze up until winter (late winter in recent decades, early winter in the early 1900s).

Pond Inlet ice development late October 2015 (the last year narwhal became trapped, which locals said they knew had happened as early as mid-November), shows that within a matter of days, any whales in the inlet were trapped: 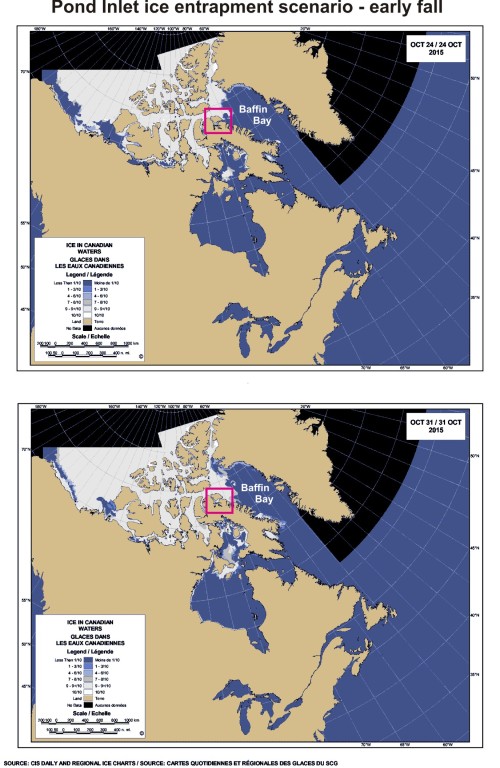 Disko Bay ice development late March 2014 – this is later in the year than described above during in early 1900s (March vs. December) but the process is the same – the last major entrapment event occurred in late March 1994 (Heide-Jørgensen et al. 2002): 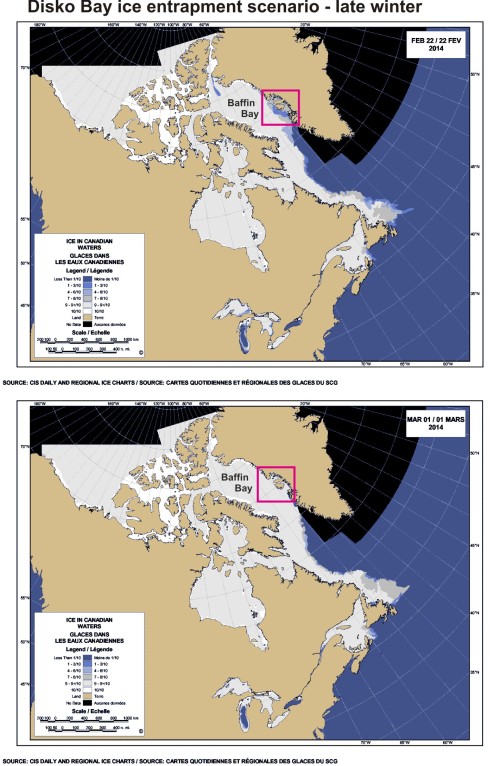 Natural variations in weather (rapid drops in temperature plus the low wind speed associated with such events) have in these cases been co-opted as indications of “climate change”. Note the contortions of Heide-Jørgensen and colleagues (2002:144) as they refer to natural weather events that take place over a matter of days as “climatic changes”:

“Whales that are trapped are likely – and in some cases known – to die of predation, exhaustion or famine, and Siegstad and Heide-Jørgensen (1994) hypothesized that the mortality involved in ice entrapments is part of the natural mortality of the whales. If this is the case, hunting of the trapped whales is not ‘fishery mortality’ but rather ‘natural mortality’… Furthermore, the occurrence of entrapments seems to be related to sudden and unpredictable changes in ice cover. Since such variations in ice formation may be attributable to climatic changes, whether natural or anthropogenic, the occurrence and distribution of entrapments should be documented.” [my bold]

Given the regularity of entrapment incidents in Disko Bay historically and Pond Inlet recently, it’s hard to fathom calling the formation of ice that leads to entrapment “unpredictable”. Rather, whether ice entrapment occurs in any given year will depend on 1) whether there are whales present; 2) speed of ice development due to local weather conditions at the time. In addition, whether it gets reported depends on someone being around to witness it and relay the information to the outside world (unlikely before the early 1900s).

In other words, the ice conditions that lead to whales being habitually entrapped in certain bays or inlets – ice moving in from offshore, very cold temperatures, and no wind – may occur quite regularly but unless there are whales present in the bay at the precise time that ice blocks the entrance (or entrances) to the bay, there will be no entrapment. However, it is also true that some isolated incidents of entrapment occur due to sudden cold snaps that cause ice to form so rapidly that whales cannot move ahead of it. But while this kind of ice formation is certainly unpredictable, it is no more so than Arctic weather in general.

As alluded to in the above quote, polar bears often find these entrapped whales long before Inuit hunters or scientists do, and the predation on these vulnerable animals can be huge (see previous post here). Ice entrapments of narwhals and belugas is therefore good news for polar bears, since they provide a naturally fortuitous source of the fat they need to survive.

Here is another quote from that Heide-Jørgensen paper (2002:147), describing an entrapment incident of belugas in 1999 in Lancaster Sound where polar bears were feeding heavily:

“During helicopter searches for polar bears an entrapment in the ice with an estimated 40 or more belugas and one bowhead whale was discovered on 30 May in Lancaster Sound off the Brodeur Peninsula, Baffin Island (73o 58.515’ N, 86o 8.585’W, Fig. 4 and 5). There were a total of 5 small pools of open water, each of which had whales in it. Because of extensive ice coverage this entrapment could easily have been overlooked, even when passing at a distance of a kilometre or two. Researchers were following the trails of a female polar bear with two yearling cubs. Immediately after these bears were found, 20 or 21 bears were seen without extra search effort. It was assumed that as many as 40 bears were in the area. Bears were in the pools or standing on the edge grabbing at the whales with their forepaws. At least a dozen whales had been hauled out and consumed. Four bears were captured and they appeared very fat for that time of the year. The ice edge was about 15 km to the east. By 10 June there were at least 20 bears in the vicinity and the ice edge was 21 km to the east. By 19 June the ice had completely broken up.” [my bold]

Another incident they describe, also 1999, south of Ellesmere Island:

“Jones Sound 1999: Hunters from Grise Fiord discovered an entrapment of belugas on 28 May 1999 85 km east of Grise Fiord at 75o 53.479 N, 80o 31.091 W (Fig. 4) in a hole 20 m long by 6 m wide. Nine polar bears were at the site, mostly big males, together with an estimated 100 whale carcasses hauled up on the ice by the polar bears (David Kalluk, Grise Fiord, personal communication). Skin, blubber and meat had been removed from the carcasses. Twenty live belugas, all badly mauled by the bears, were at the hole (Fig. 6). The whales were believed to have been entrapped in early April since little ice had been present in mid March.”

On 10 June, the belugas were using four of the holes. Three additional whales had been killed by polar bears, and three more were badly injured. There were five bears within 2 km of the site, all fat with their “stomachs almost dragging on the snow”.” [my bold]

ABSTRACT
Three ice entrapments of Monodontids have been reported in the western North Atlantic since 1993. Hunters in Disko Bay, West Greenland, discovered one in March 1994 that included about 150 narwhals (Monodon monoceros). The entrapment occurred during a sudden cold period which caused ice to form rapidly. The trapped whales were subject to hunting, but about 50 of the killed whales could not be retrieved in the ice. The whales were trapped in a small opening in the ice and because of that they would probably have succumbed even if not discovered by hunters. Two entrapments involving white whales or belugas (Delphinapterus leucas) occurred in the eastern Canadian Arctic in May 1999; one in Lancaster Sound discovered by polar bear (Ursus maritimus) researchers and one in Jones Sound discovered by hunters. The first included one bowhead whale (Balaena mysticetus) and about 40 belugas that were being preyed upon by polar bears. The second involved at least 170 belugas, of which about 100 were killed by polar bears and 17 were taken by hunters. The entrapments in Disko Bay and Jones Sound both occurred in areas where entrapments have previously been reported, whereas the one in Lancaster Sound was in a new area.