Posted on August 30, 2016 | Comments Off on Most polar bears easily deterred this time of year, lucky Labrador boaters discover

A polar bear female accompanied by a cub recently attempted to board a small sailboat anchored in a remote harbour off central Labrador – giving the two American boaters below deck a mighty big surprise.

The encounter occurred south of the same national park where a much-publicized attack occurred in July 2013 (see previous posts here and here) but had a happier ending. See more below from a CBC report released this morning (based on a radio interview) and some ecological context for the sighting not mentioned by the reporter.

The sailors were below deck reading one evening and heard the swimming bear approach, then start to climb aboard. The noise the couple made, including using their air horn, eventually dissuaded the bear, who eventually swam off with her cub.

Torngat Mountains National Park on the northeastern tip of Labrador is shown in the map below.

The attack took place well south of the park (if the location given as Moore’s Harbour is correct), in the sheltered spot amongst the many Okak Bay islands that might well host a few summering polar bears: 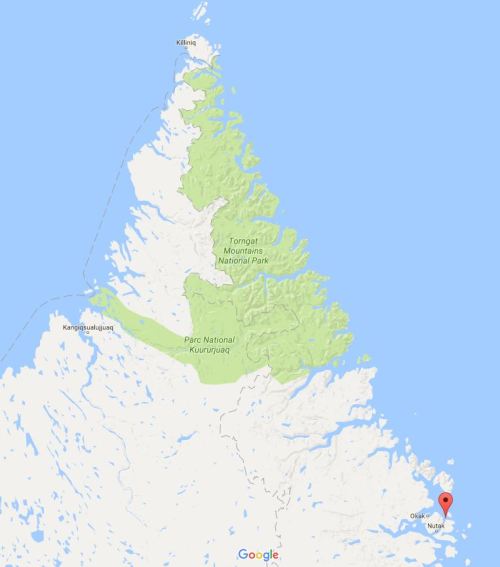 Here’s some quotes from the CBC story (30 August 2016, ‘Give them their space’ says U.S. sailor who encountered polar bears in Labrador):

“Nancy Zydler and her husband took their sailboat from Georgia, U.S.A. to the icy waters off Labrador for the fifth time this summer.

However, nothing compared to what they saw when they were anchored in Moores Harbour, near the Okak Islands — on the southern limit of Torngat Mountains National Park.

Zydler, her husband and another couple were quietly reading in their bunks one evening when they heard bubbles moving up the side of the hull, before feeling the boat slightly nudge to the side.

When the vessel began to lurch even harder and they heard a scratching noise against the boat, their first thoughts were that it was ice, which can pose a real problem while anchored.

“As we ran up to take care of it, I thought ‘you better be careful, it could be a bear,'” she told CBC’s Labrador Morning.

“Then my husband jumps up and then jumps right back down and he said ‘it’s a bear, it’s right on the boat, make some noise.'”

That’s when Zydler decided to go have a look for herself, and noticed the large bear in the water about three metres away. She said she even made eye contact with the animal before she ran back down inside the cabin.

The two couples watched the polar bear move around the boat for a bit, and took some photographs. Then they realized there was also a cub in the water nearby.

Zydler said they made as much noise as they could, using an air horn, to try and scare the animals away, breathing a sigh of relief when the bears eventually swam off.”

There is no way to tell from the picture provided if the bear was thin or starving – but the fact she was rather easily deterred suggests she was not desperate enough to attack.

Bears are curious and will investigate any unusual objects to see if there is any food potential, but most bears at this time of year are still fat from spring feeding – and Davis Strait polar bears have had years of plentiful prey (in the form of abundant young harp seals) to fatten up on.

However, this area is well south of Labrador locations that polar bear researchers in the late 1970s (Stirling and Kiliaan 1980) found polar bears to tag – see map below, where the large fjord above “Saglek” marks the southern edge of Torngat park. This difference is a likely consequence of the higher number of Davis Strait polar bears and plentiful food that has been available since that time.

It does means a long wait for ice to return for this female and her cub (longer than Western Hudson Bay bears), although shorefast ice from which to hunt seals likely forms in the fall much earlier than pack ice drifts down from the north. But since more time on land does not necessarily spell doom, if she was fat enough after spring feeding and resourceful enough over the summer, they may make it. 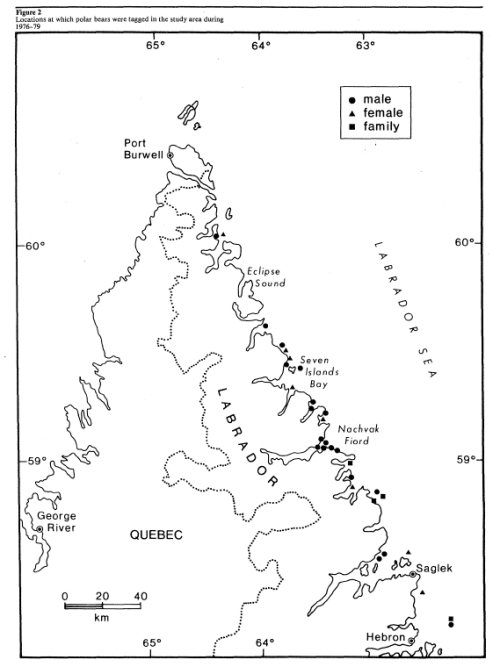