Posted on April 3, 2017 | Comments Off on East Coast crawling with polar bears since early March thanks to the pack ice

The  hot polar bear news right now is the large number of sightings of bears onshore in Newfoundland and Labrador – even the CBC is impressed. 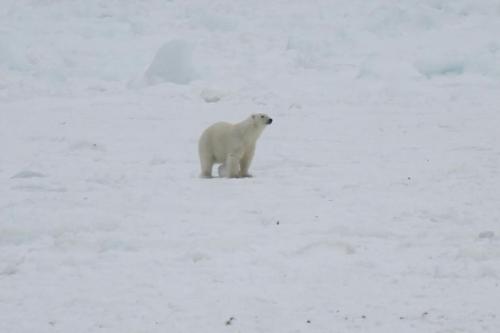 All the bears have been brought to land by the abundant pack ice that’s been present off Labrador and northern Newfoundland (the territory of Davis Strait polar bears), which also killed a humpback whale that got trapped against the north shore (a not unusual event, apparently).

Mapping the reports of polar bear sightings since early March helped me get a handle on the total number of encounters: more than a dozen, it turns out.  There have been a few bear sightings in this region every year recently but such high numbers are remarkable, especially so early in the season. When will it end?

My picture annotated map and a list of sighting reports, with links, is below but stay tuned: this story may not be over yet.

UPDATE 5 April: another sighting, in St. Brendan’s (west of Bonavista), added to the map below and quotes from one witness. The map is now Version 2. A sea ice map for 5 April has also been added at the end of the post.

UPDATE 9 April: another sighting and a bear casualty, see below. Map revised again.

UPDATE 22 April: Another sighting west of St. Anthony on Wednesday, 19 April has been added to the map (now Version 4) and an alert that I’ve added a new post (21 April) about the claim by one vocal polar bear specialist that all of these sightings are the result of “failed” sea ice conditions off Newfoundland and Labrador this year (seriously, I’m not making this up). I’ve added the most recent ice map at the end of this post.

Here’s a map of the sightings (photos acknowledged below), now Version 4 (updated 22 April ): 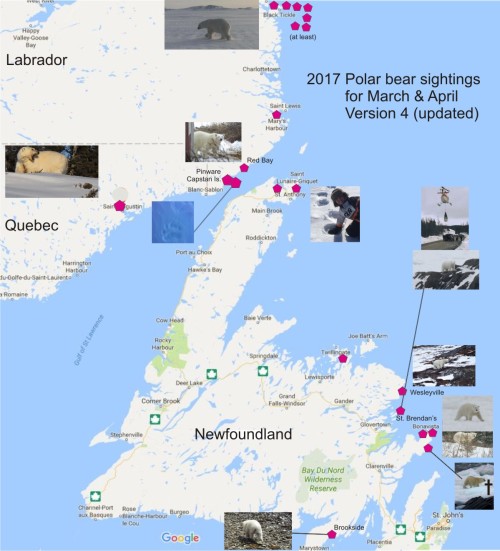 All the encounters of bears that generated photos show well fed bears in good condition.

Footprint photos was all Amy Randell got of the polar bear that ran in front of her car, with 6 year old son Cruz for scale: 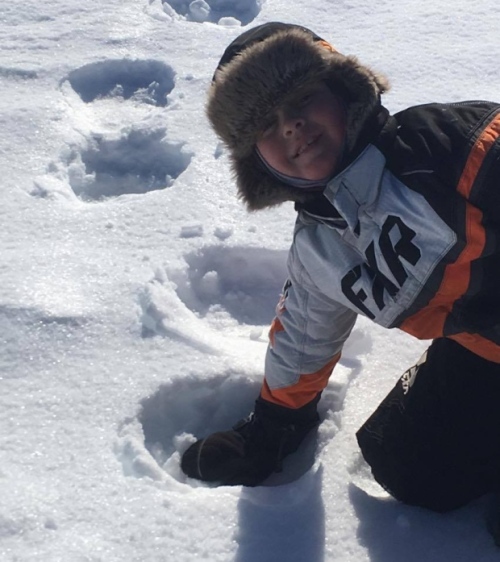 Sherman Downey shared this photo he took in Black Tickle: 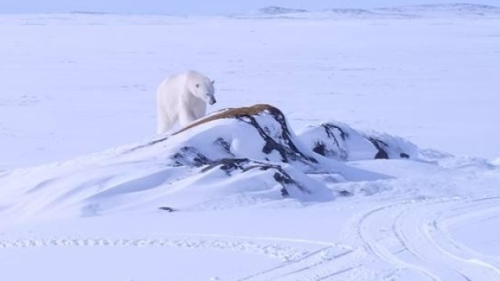 Photo from one of those communities submitted to The Telegraph below (I’ve put it in Red Bay on the map): 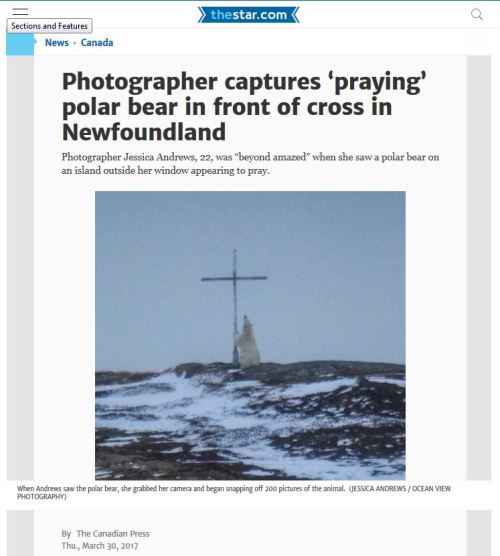 The “praying bear” appears to be the same animal as photographed by Dana Blackmore, below (shared with the CBC): 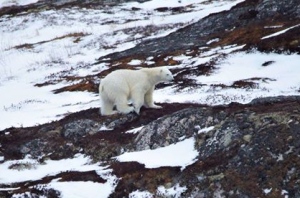 Bonavista, Newfoundland (2-3 April 2017) “There could be more than one polar bear on Bonavista Peninsula”  (older story here).

Photo below by Brandon Collins at Birchy Cove near Bonavista on Sunday 2 April of a female and cub (an older one, not a young of the year), shared with the CBC: 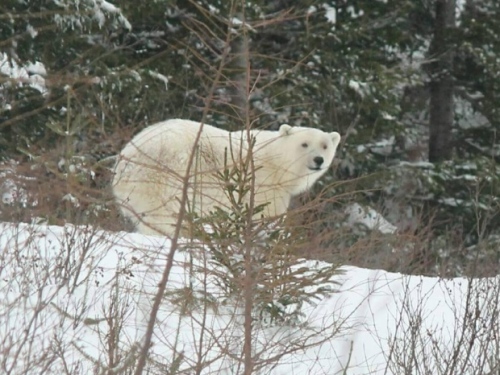 Photo below by Brandon Collins in Melrose (on the Trinity Bay side of the peninsula) of a large lone male spotted Monday 3 April, shared with The Packet: 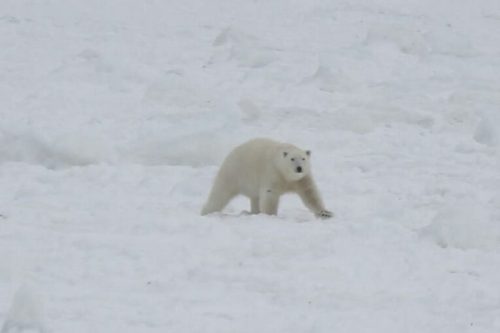 ADDED 4 April: More photos of the Melrose bear from this morning of a bear who is really poking around close to houses and sheds and causing trouble.

Submitted to the CBC, “Polar bear plans getaway after warning issued in Bonavista area” taken 4 April and submitted by Shelly Ryan – see the link for more photos – pulling apart a snowmobile seat and investigating a shed: 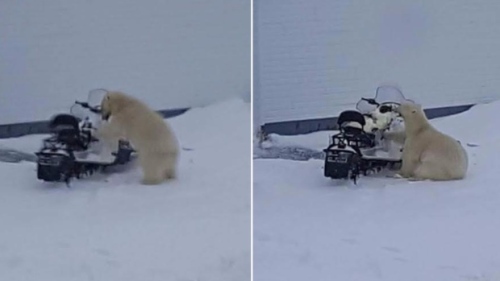 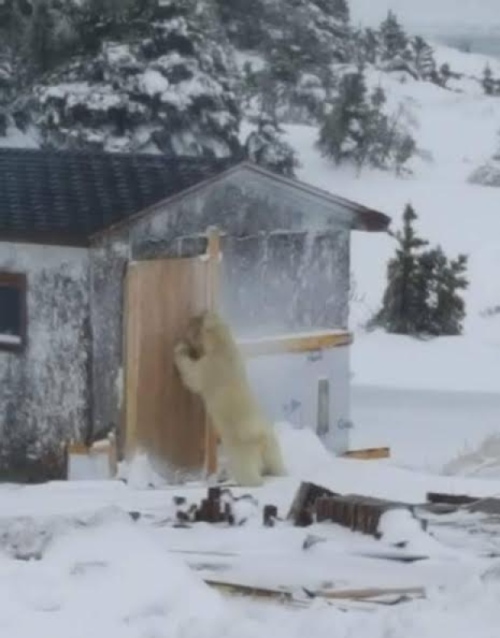 Same bear, different photographer (there is also a video at the link), taken 4 April by Dion Diamond at Melrose (sounds like the same area as the CBC incident), reported in The Packet “Polar bear steals snowmobile seat in Melrose”: 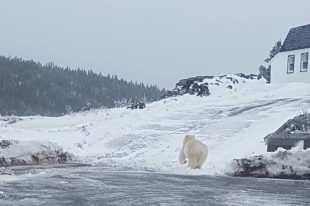 St. Brendan’s, an offshore island between Wesleyville and Bonavista (5 April 2017) “Polar bear spotted near St. Brendan’s” Another report (via VOCM, has more photos shared by resident Tracey Hynes, including the one below):

“After exploring St. Brendan’s, Hynes said the bear headed back to the ice, where he killed and ate a seal, cleaned himself up, and ventured back to explore the community. He was startled, however, and rushed back to the ice and disappeared from sight.” [The Packet, 5 April 2017] 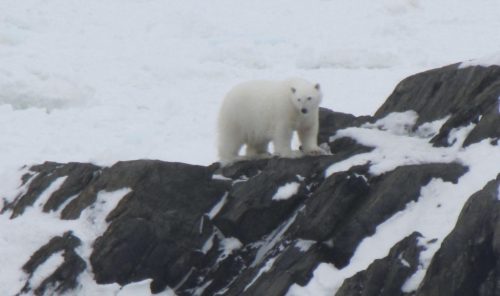 However, just after 5 pm local time, the St. Brendan’s bear was tranquilized, captured and airlifted out of the community (5 April 2017), after getting a little too close for comfort. 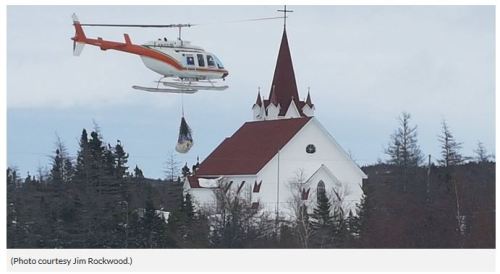 Another view of the airlift operation in St. Brendan’s: 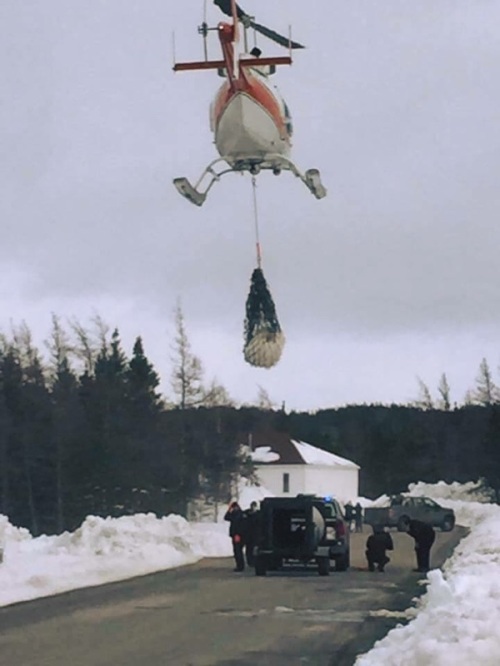 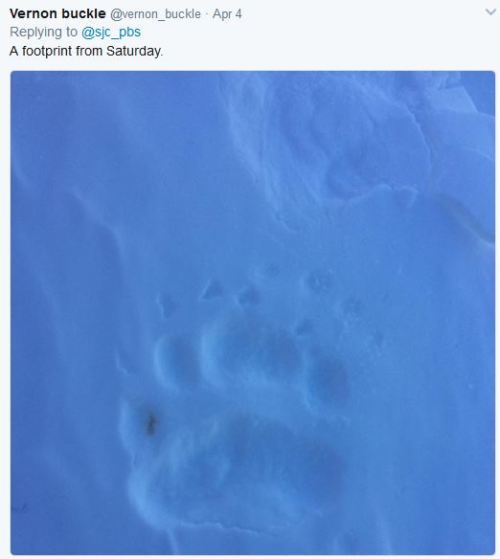 Pinware and Capstan Island locations on the south shore of Labrador: 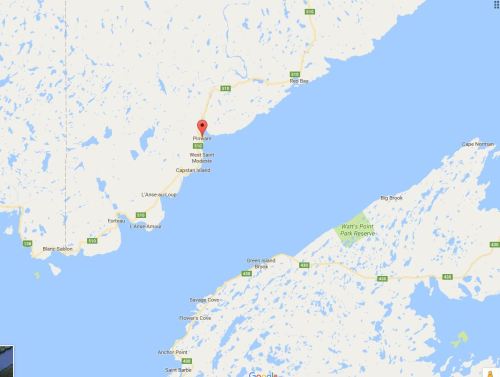 A polar bear spent the day on the ice flows just off the community but decided to come ashore for a look around town. That made local conservation officers nervous, especially with all the people crowding around for a look and a snapshot. Unfortunately, the bear ended up dead by the end of the day, shot by conservation officers, which caused some hard feelings.

Photos below by Brandon Collins: 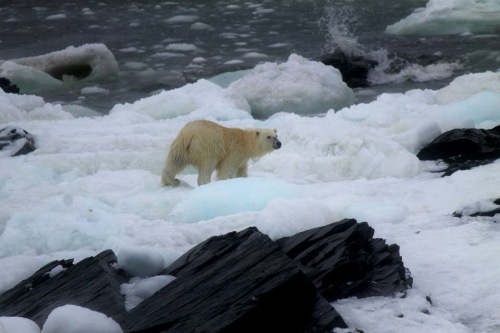 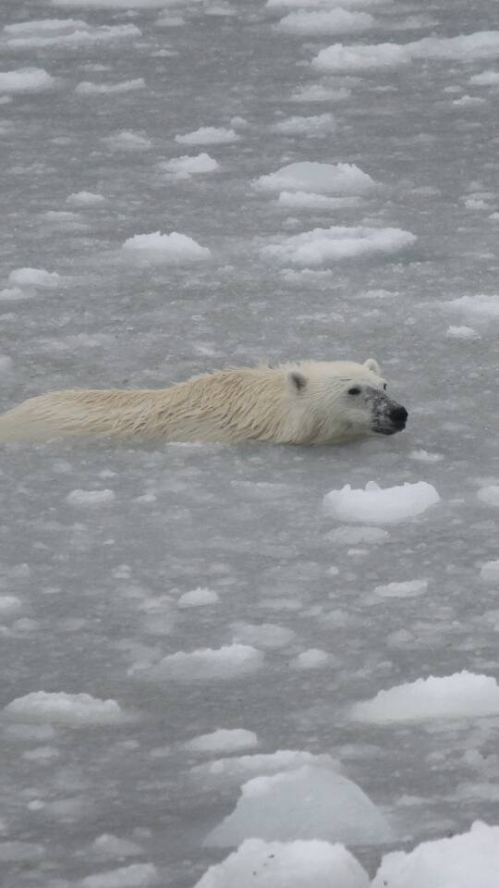 It’s unusual for a polar bear to get this far south but pans of ice and mini-icebergs that don’t show up on ice maps can swirl around quite a bit, especially with the storms that Newfoundland has had over the last couple of weeks. Brookside is on the south shore of Newfoundland, west of St. John’s. 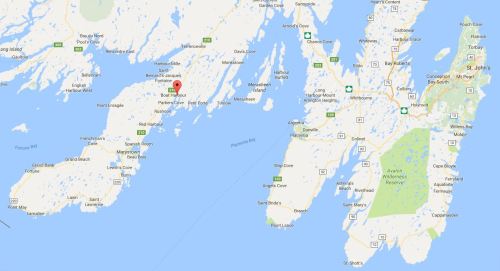 “The Department of Fisheries and Land Resources is advising the public there are reports a polar bear was seen Sunday on the Burin Peninsula near the communities of Brookside, Parker’s Cove and Boat Harbour.

Roslyn Denty managed to snap several photos of the animal in Brookside and posted them to her Facebook page.

“A lot of pack ice outside and he came in on the ice,” she commented.”

This photo by Roslyn Denty is the clearest and shows the bear’s fat little rump; there are other shots at the link. While it seemed unlikely that this bear’s adventure would end well, conservation officers apparently managed to safely capture the bear and plan to relocate it to the north on Monday (10 April). 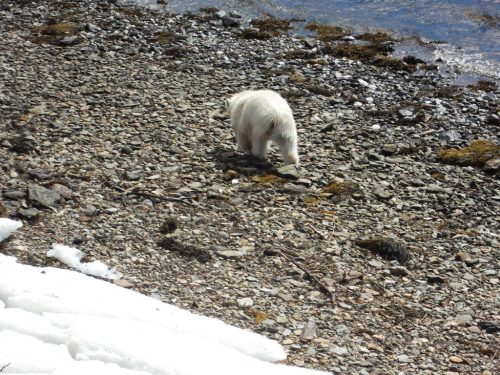 No picture is available of the bear but the approximate location is shown below (see marker for “Wildberry Country Lodge” in Parker’s Brook). You can see by the latest ice maps added below and the end of this post that the region is still choked with ice: 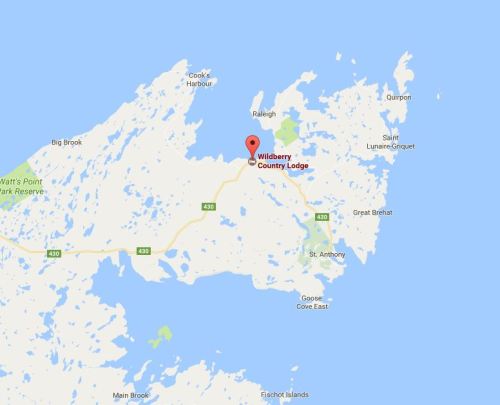 According to the latest report,  ice conditions in the Strait of Belle Isle (other side of the Northern Peninsula, facing the Labrador coast) are anything but usual  (19 April 2017, in The Western Star)(my bold):

“According to the Canadian Coast Guard, the ice pack is currently four feet thick or more in places. Combined with chunks of older, harder ice and unseasonably cold temperatures, the ice has cemented together to form a formidable navigational obstacle.

The pressure on the shoreline is so great that the Terry Fox, Canada’s second biggest icebreaker, cannot get through it.

The ferry MV Apollo, which is the link between southern Labrador and the Northern Peninsula on the Newfoundland side of the Strait of Belle Isle, is docked in Blanc Sablon and not going anywhere for the foreseeable future until the ice eases up.

“There was a bit of a southwesterly blow today, but it was not enough wind to move the ice and the pressure there is going to remain,” Rebecca Acton-Bond, the Canadian Coast Guard’s acting superintendent of ice operations in Atlantic Canada, said Wednesday.

“It’s like a wall of solid ice. The captains I have spoken with say they have never seen anything like these conditions in this area ever.”

Sea ice maps for 2 April through 9 April below (don’t forget that polar bears are strong swimmers), with April 19 (the day of the latest sighting) and April 22 (the date of the latest update) added: