Posted on March 28, 2017 | Comments Off on Recent incident in Foxe Basin shows the danger of hungry polar bears in winter

A late-night encounter with a thin and hungry polar bear in the northern Quebec community of Ivujivik in early March was a nightmare-inspiring event. 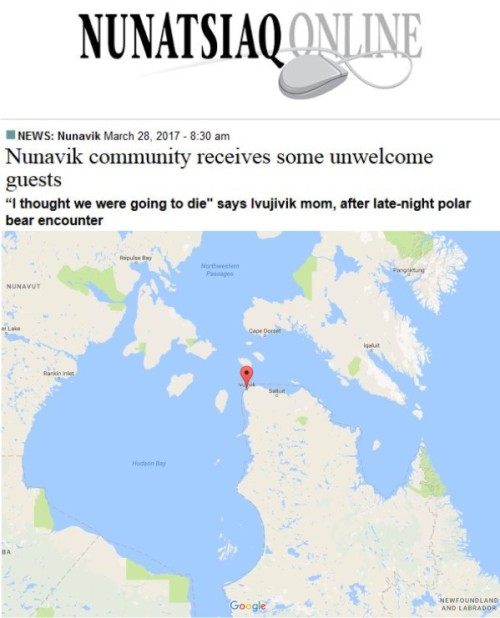 Reported this morning by NunatsiaqOnline (Nunavik community receives some unwelcome guests, 28 March 2017), the thwarted polar bear attack at the edge of Hudson Bay was the fourth defense kill this year (and the second this month) after a large number of bear sightings by residents this winter.

In contrast to reports of other encounters this winter that involved unusually fat bears for this time of year, this bear was thin and obviously dangerous.

Here is what happened to Ivujivik resident Manu Qaunnaaluk and her six year old daughter Deseray as they walked home about 11 pm after a community event:

“When we were almost home, we heard some dogs start barking out of nowhere,” she said. “It sounded really serious.”

The pair was only a few houses away from their home in the Nunavik village of 400 when Qaunnaaluk saw the polar bear, dangerously close, at about 50 feet away.

“I told her ‘Go! Go!’ And we both started to run,” Qaunnaaluk said. “I thought we were going to die.”

Qaunnaaluk didn’t think she and her daughter could make it safely home so she pulled Deseray up the closest set of stairs and pushed inside her neighbour’s door.

Qaunnaaluk said she was shaking so much she couldn’t get the door open, so she started screaming “Nanuk!” until someone opened the door to let them in.

This all happened quickly. Within the next few minutes, the next-door neighbour and owner of the dogs, Mosusie Audlaluk Jr., had come out with a rifle and shot the polar bear about seven times, until he was sure the animal was dead.

Ivujivik, situated at the northwestern tip of Nunavik where Hudson Bay meets the Hudson Strait, has seen an usually high number of polar bears in town this winter. There have been four defence [sic] kills this year—the most recent one this past weekend—although community members say they’ve seen even more bears out by the bay.

No residents or dogs have been injured by polar bear attacks so far this year but the municipal council has discussed the issue and considered hiring someone to patrol the community for bears, like the Nunavut community of Arviat has done in recent years.

This part of northern Quebec lies within the boundaries of the Foxe Basin polar bear subpopulation (see map below), which was last surveyed in 2009/2010.

At that time, while bear numbers were found to be stable despite declines in summer sea ice (about 2,580 total), it’s quite possible the population size has increased over the last 7 years. Another more recent study showed bears from Foxe Basin were in the best condition (i.e. fattest) of all subpopulations studied (see previous post, Point 3), which indicate the bears are doing much better than expected.

As I’ve shown elsewhere (here and here), less summer sea ice has not impeded the natural, long-term increase of polar bear populations anywhere in the Arctic since hunting regulations and quotas were put in place in the 1970s.

Watch the video below for the story of the polar bear success in the face of declining sea ice and buy my science-based novel EATEN for a fictional account of what could happen if it wasn’t one hungry polar bear onshore looking for food but dozens of them.