Churchill, Manitoba’s Polar Bear Alert Program is still reporting many fewer problems with polar bears onshore than it did last year at the same point in the ice-free season (week 5, 7-13 August):

Although it’s been warmer than average recently (25.4 degrees C yesterday, expected to reach 29 degrees C today and 28 degrees C tomorrow), according to Environment Canada weather records, that’s not even close to an August record-breaker temperature for Churchill.

Current conditions and the 7 day forecast for Churchill at 15 August 2017 from Environment Canada: 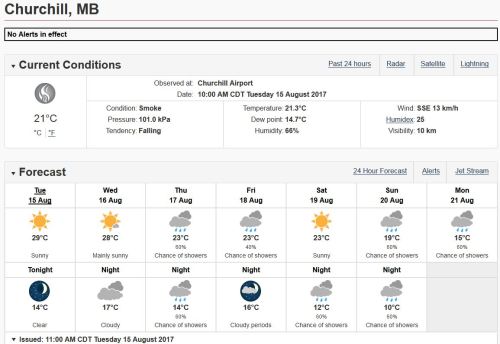