Polar bear specialist Mitch Taylor emailed me and others his response to the New York Times article that appeared Tuesday (10 April) about the Harvey et al. (2018) BioScience paper attacking my scientific integrity. Here it is in full, with his permission, and my comments. Don’t miss the footnote! 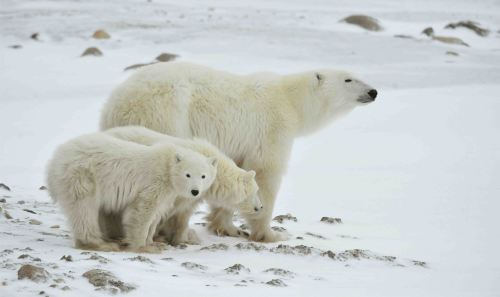 The real story has been the extent to which polar bears have managed to mitigate the demographic effects of sea ice loss so far. In retrospect this is perhaps not so surprising because polar bears have been around since the Pliocene which means they have persisted through not only glacial cycles, but also through all the natural climate cycles during the glacial periods and interglacial periods.

Did Susan misrepresent the predictions from Amstrup’s “Belief Network” [Amstrup et al. 2007]? Has she misunderstood the population estimates provided by the various technical committees and specialists groups? That is easy to check, because these papers are published. They are part of the record. I have been active in polar bears since 1978. I didn’t recognize 12 of the 14 names on the paper written criticizing Susan for publishing an article about polar bears because she does not have any direct experience in polar bear research or management. Does anyone need to point out how hypocritical this is? Since when does anyone need to tag a polar bear to compare what was predicted to what has happened, based on published information?

It is also germane that the IUCN Redbook authority was unwilling to continue listing polar bears as a “vulnerable” species based on current population estimates and Amstrup’s Bayesian Network model expectations. This was somehow not mentioned in the article criticizing Susan. Polar bears remain an IUCN “vulnerable” species, but now that is based on a Polar Bear Specialist Group (PBSG) polar bear population model that is also driven by speculation and also presented as “expert” predictive.

And the IUCN went for it.

There is an International Agreement for the Conservation of Polar Bears, and occasionally the parties to that Agreement (USA, Canada, Denmark-Greenland, Norway, and Russia) have a formal meetings. The signatory nations (parties) take their information only from the IUCN/SSC Polar Bear Specialists Group (PBSG). If you don’t believe that climate science is settled, you can’t be a member of the PBSG, even if you started working on polar bears in 1978. Susan is also not a member.

There are two ways to get a scientific consensus. One is to present the data and the analysis in a manner that is so persuasive that everyone is convinced. The other way is to exclude or marginalize anyone who does not agree. This occurs so commonly now that it has become an accepted practice. The practice of science has become secondary to governments, NGOs, journals, and scientists who feel that the ends justify the means.

The response to Susan’s work is politically motivated, not an argument against her conclusions. The journal’s response to this article and to her complaint was also political. Sadly, BioScience is not a credible scientific journal anymore. We have fake news and fake science.

If you can’t refute the argument, the only thing left is to discredit the author. Where did they get their funding? How many bears have they tagged? Are they in the club or not? … And if not in the club, what the hell are they doing voicing an opinion? How are right-thinking good people like us going to maintain the impression of omnipotent knowledge and scientific consensus if people like Susan are allowed to hold us accountable for what we publish? Bad enough that the IUCN won’t do as it’s told, at least not without a new crystal ball.

There are currently some valid indications that some polar bear subpopulations may be experiencing demographic impacts from reduced sea ice. There are also methodology issues and high variance associated with those studies. Much of the past work has become dated and much of the population work in the last decade is either agenda driven and unreliable, or compromised by data collection issues to the point that accurate population demography estimates are not possible.

However, there are also many new studies that report their findings objectively. So just because some researchers and journals have lost perspective does not mean polar bears are not currently impacted by sea ice decline or never will be.

To me the loss of credible information is the real harm that has resulted from turning scientific inquiry into an agenda driven exercise … even for a good cause.

Some may see parallels within climate science world to the polar bear experience.

Footnote 1. By de-coupling I meant that Regehr’s model [Regehr et al. 2016] has no input from the GCMs [General Circulation Models] for sea ice dynamics. If you suddenly reduced CO2 levels somehow, the GCMs would respond by predicting an increase in sea ice. Regehr’s model uses a simple regression fit to sea ice decline as measured since the satellite record began in 1979. As you know, sea ice declined faster than the GCMs predicted. So the PBSG has have given up on the climate models and now they just use the historical slope to project continued sea ice decline forward. In other words, their current argument for up-listing polar bears due to anthropogenic global warming is now entirely independent of atmospheric CO2 levels. 🙂 It seems the PBSG agrees that climate models are not predictive with respect to sea ice which was their central argument for up-listing them in the first place.

Dr. Mitch Taylor was a member of the IUCN Polar Bear Specialist Group (PBSG) as a polar bear scientist representing Canada for 28 years (1981-2008) but in 2009 he was booted out by chairman Andrew Derocher for his skeptical views on human-caused global warming. The group then changed their rules on membership to justify their actions. Mitch currently teaches at Lakehead University, is still active in polar bear research and still writes peer reviewed papers and professional reports on that research (e.g. Anderson et al. 2016; York et al. 2016).

Mitch said: “Since when does anyone need to tag a polar bear to compare what was predicted to what has happened, based on published information?”

Well, yes, precisely. Anyone with an appropriate background in zoology and a solid knowledge of the polar bear and sea ice literature (which I have) can legitimately assess whether Amstrup’s prediction was correct or not. My lack of field experience tagging polar bears is moot.

Mitch is also spot-on in pointing out that the IUCN Red List assessment for 2015 did not use General Circulation Model (GCM) sea ice predictions based on atmospheric CO2 levels for their polar bear survival models (as did Amstrup and colleagues in 2007), which means that predicted polar bear declines accepted by the IUCN are no longer linked to increasing levels of CO2 as a causative agent. See the quote below from the Regehr et al. (2016) supplementary data, page 7 (pdf here):

“We projected *ice* forward using linear models fitted to observed values of the metric from 1979-2014, rather than recalculating the metric based on forecasts of sea-ice extent from global climate models. Summer sea-ice loss based on linear projections is generally more rapid than projections based on the ensemble mean of Coupled Model Intercomparison Project Phase 5 (CMIP5) models through mid-century [11, 12], although we did not evaluate how global climate model output would compare to observed values of the metric *ice*.”

On peer review and scientific disagreement

I am told repeatedly that publication in the peer viewed literature is the only scientifically acceptable format for presenting scientific findings and the only venue that ensures scientific counter-arguments from polar bear specialist colleagues: my scientific preprint paper (Crockford 2017) does not count.

For example, see this recent tweet from Harvey et al. (2018) co-author Bart Verheggen about the fact I did not publish my criticisms about the 2007 Amstrup et al. model and other polar bear issues in a peer-reviewed journal:

But just in case it's a sincere question:
If Crockford would put her views to peer review you'd logically get a scientific argument. But she's mainly putting her views in the general media – she's not joining the scientific discussion.

However, note this tweet by Andrew Derocher on 28 February 2018 in response to someone citing the York et al. paper, on which Mitch Taylor is a co-author:

Paper organized by another climate change denier that was supported by the Heartland Institute – well know denier outfit – on a retainer. https://t.co/evWEG2FaAF The paper is widely known as denier fodder.

That’s the “scientific” response Mitch Taylor gets and which I can expect if I am ever able to publish in the peer reviewed literature. And should I find myself a co-author or two to join me in publishing a peer-reviewed paper, they can probably expect the same warning-off treatment that Ian Stirling recently gave co-author Val Geist.

Australian physics professor Peter Ridd (who is defending himself against his employer, James Cook University, for the right to criticize the work of colleagues predicting the imminent extinction of the Great Barrier Reef), emailed me his thoughts about the issue of peer-reviewed publications raised in the Harvey et al. paper [my bold]:

Your description that the paper by Harvey et al as academic rape is fair. I would also describe it as a Mafia hit job. I have never seen an article like it.

But it is evident that these self appointed protectors of “The Truth” are running scarred as they are effectively admitting that the influence of these terrible blogs is having a profound effect. The disgraceful tone of their article will convert many over to our way of thinking.

In my view, and I bang on about this point mercilessly, is that responses should always broaden the argument to the Replication Crisis in science – 50% of recent important peer-reviewed literature in many areas of science is wrong. This incredible and well documented fact is in the mainstream scientific literature but the public are not aware of it. The whole scientific system is failing, not just AGW science.

So why does Harvey et al equate peer-review with “The Truth” when at best half is wrong and with the added problem of ideology in AGW (and Polar Bear) research we can expect much more than 50% to be wrong without even looking at any detail.

Other areas of science are taking on board the Replication Crisis and trying to do something about it.

Contrast this with Harvey et al who do not accept any of their work is wrong and leave a horses head in Susan Crockford’s bed.”  Peter Ridd