Posted on November 7, 2018 | Comments Off on Polar bears waiting for ice on Russian coast of Chukchi Sea threaten village residents

Ryrkaypiy on the Chukotka coast of Russia is similar to Churchill, Manitoba: both human settlements are of similar size and are close to where polar bears wait for sea ice to form in the fall and where some pregnant females make their maternity dens in preparation for the birth of cubs over the winter (Durner et al. 2018:xxii). Sea ice advances from the west along the Chukotka shore and bears cannot move offshore to resume hunting until the sea ice reaches the village of Ryrkaypiy. According to the Siberian Times, the village is again having problems with local polar bears, as they have for the last several years (including 2013).

“At least twelve polar bears are inside the village, with some of them paying daily visits.

The rest are within three kilometres away.

‘We have to constantly scare the bears away with signal rockets, so far thanks to efforts of the Bear Patrol we manage well’, said acting head of Ryrkaypiy Yevgenia Malakhova.

The large group of bears started to form a month ago when they came close to Cape Kozhevnikov.

‘Now the bears moved close to the village, they also walk back and forth all along the shore line. The animals are irritated because they are ready to leave the area and start hunting in the deep sea, but ice is too thin’, said Malakhova.

All 760 locals are aware of the dangerous situation and take extreme care when moving around the place.”

More below, including map and ice chart.

Red marker shows the location of Ryrkaypiy on the coast of Chukotka:

“Along with army servicemen, locals cleaned the shore from bodies of dead seals and move them further away from the village so that bears use more distant areas as their feeding points.

Tatiana Minenko, head of the Polar Bear Patrol said that so far the situation was under control.

‘We can’t do anything because polar bears migration routes lie right next to our village.

Our main job is to protect humans and bears from clashing. As soon as we get a call about another polar bear in the village, we rush there with signal rocket and guns with rubber bullets.

‘Each time we try to scare a bear as much as possible that it doesn’t get back to the village and realises that humans are dangerous’, she said.

Before the ice is frozen solid, the village can have as many as fifty polar bears as ‘neighbours’, she said.

Read the rest here, with lots of photos.

Note that sea ice charts show that since this story was written (although it was published today, Chukchi Sea ice had advanced as far east as Ryrkaypiy as of yesterday.

So the villagers’ troubles with polar bears will soon be over, if they are not already. 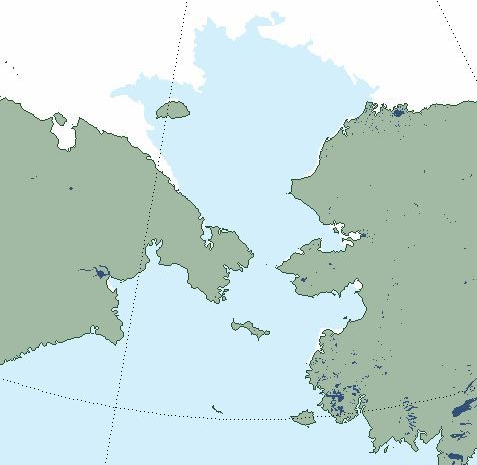 Ice will soon reach Wrangel Island, an important denning area for Chukchi Sea bears. Males and non-pregnant females that have spent the summer on Wrangel will soon be able to take to the ice to resume hunting for seals.