International Polar Bear Day: a time to admit the species is not threatened with extinction due to reduced sea ice habitat

Posted on February 26, 2019 | Comments Off on International Polar Bear Day: a time to admit the species is not threatened with extinction due to reduced sea ice habitat

Times have changed: where once many scientists worried that polar bears could not survive an Arctic with 40% less ice, now the concern is that people of the Arctic might not be able to keep themselves safe from growing numbers of increasingly fearless bears.

International Polar Bear Day is tomorrow, 27 February. It’s a good time to reconsider polar bear conservation in light of current realities. Polar bears are not threatened with extinction by loss of sea ice habitat but continue to thrive in spite of it (Crockford 2017). 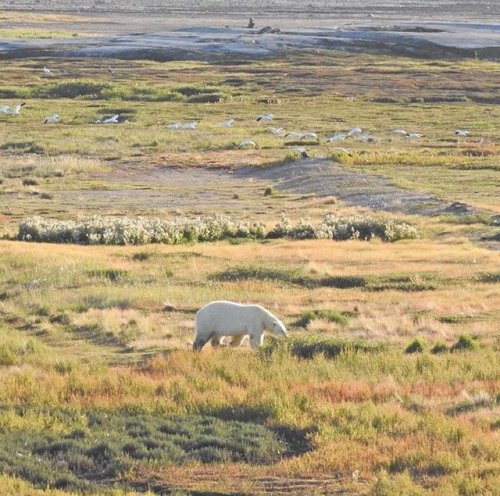 Tomorrow, the 2018 State of the Polar Bear Report will be released. But for now, see some of the failed claims below.

The claim that polar bears are an increasing danger to people because reduced sea ice prevents them from eating enough seals is refuted by the fact that many bears that have threatened or fatally attacked people in recent years have been fat and healthy. Bears like the one pictured below (and the ones described here) did not come ashore in winter because of a lack of sea ice: the bear in the photo below was described as being a “very fat” subadult female. She came ashore in late February 2017 when Hudson Bay was completely ice covered.

The claim that Western Hudson Bay polar bears are an increasing danger to people because they are spending so much longer on land during the ice-free season (compared to the 1980s) that they use up their fat is at odds with reports of attacks being made after only two months or less on shore — half the time that bears spent on shore in the 1980s.

The claim that Western Hudson Bay polar bears have caused more problems in recent years because they are spending more time on land during the ice-free season (compared to the 1980s) is at odds with the fact that breakup and freeze-up dates have not changed significantly since 1995 (Castro de la Guardia et al. 2017, see below; see also Cherry et al. 2013; Lunn et al. 2016). Not only have sea ice conditions have not gotten any worse for polar bears in Western Hudson Bay over the last few years, freeze-up in 2017 and 2018 was as early as it was in the 1980s.