Posted on May 17, 2019 | Comments Off on Video exposé of the groundless Netflix bid to elevate walrus to climate change icon

Last month, Netflix and WWF released a collaborative nature documentary that contained an egregiously: that Pacific walrus are being forced ashore by global warming where they suffer staggering population losses. But this is a story the film producers and WWF concocted for their own purposes, not a statement supported by scientific fact. 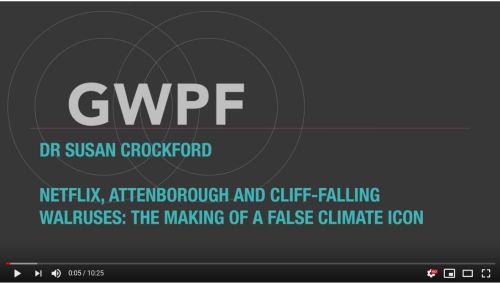 Over the last month, pointed questions have been asked about what really happened in Siberia while the film crew was there – and what didn’t. Scientific documents support the conclusion that Pacific walrus are currently thriving, have not been harmed by recent sea ice losses, and are not expected to be harmed in the foreseeable future, see here, here, here, and here.  This new video explains it all.

Netflix, Attenborough and cliff-falling walruses: The making of a false climate icon

In a GWPF video released today, Dr. Susan Crockford, a Canadian wildlife expert, exposes the manipulation of fact behind the controversial walrus story promoted in the Netflix documentary film series, ‘Our Planet’, that was released early last month.

One episode in the series contained a highly disturbing piece of footage of walruses bouncing off rocks as they fell from a high cliff to their deaths. Narrator Sir David Attenborough blamed the tragedy on climate change, insisting if it weren’t for lack of sea ice the animals would never have been on land in the first place. World Wildlife Fund for Nature (WWF) used the sequence to suggest the walrus was “the new symbol of climate change”.

However, most of what Sir David told viewers was a fabrication. Careful investigation has revealed that the producers, with help from WWF, created a story that had elements of truth but which blatantly misrepresented others and contained some outright falsehoods.

Dr. Crockford explains why it is especially incorrect to claim that large numbers of walruses resting on land constitutes a sure sign of climate change.

“Enormous herds of Pacific walrus mothers and calves spend time on beaches in late summer and fall only when the overall population size is very large. Recent estimates suggest there are many more walruses now than there were in the 1970s, which is the last time similarly massive haulouts were documented. Huge herds of walruses resting on beaches are a sign of walrus population health, not evidence of global warming. That’s largely why the US Fish and Wildlife Service concluded in 2017 – the year the Netflix scene was filmed – that walrus do not require Endangered Species Act protection.”