New Scientist has an article coming out next week takes a fairly reasoned approach to the polar bear conservation issue. It acknowledges that polar bear numbers have not declined in recent years even though summer sea ice dropped dramatically but goes on to perpetuate a number of myths that might not have happened if the author had done his homework or quizzed his other experts as thoroughly as he did me. 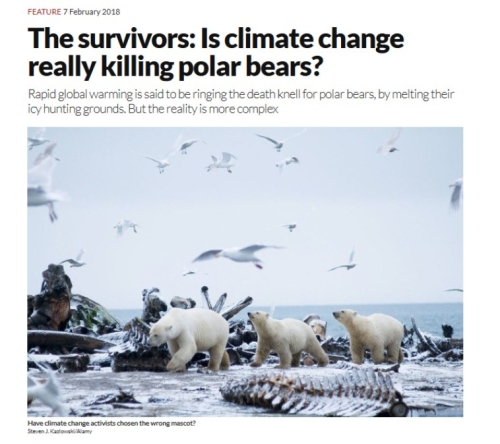 END_OF_DOCUMENT_TOKEN_TO_BE_REPLACED

Posted on May 27, 2016 | Comments Off on Most polar bear hybrids said to exist have not been confirmed by DNA testing

Although there are only two confirmed polar bear X grizzly hybrids (see recent posts here and here) – one in 2006 and a 2nd generation back cross in 2010 – there have been a few other unconfirmed sightings and/or hunters reports in addition to the Arviat animal shot last week, but how many? 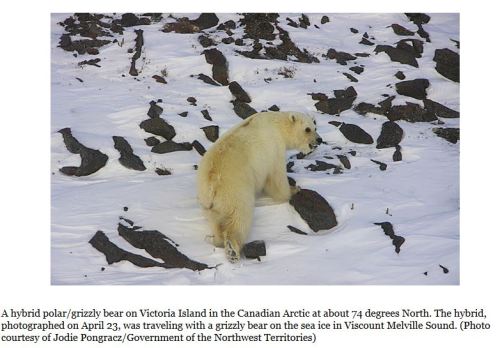 In a CBC radio interview today (27 May 2016), polar bear biologist Andrew Derocher claimed there have now been 9 polar bear/grizzly hybrids reported in Canada (with the Arviat animal shot last week being the 9th).

I think I’ve tracked down the details on those six unconfirmed Canadian sightings, plus another from Alaska. But as you will see, some of the reports are so vague it’s hard to know whether these are the animals Derocher counts as hybrids or not.
END_OF_DOCUMENT_TOKEN_TO_BE_REPLACED

Posted on May 18, 2016 | Comments Off on Another alleged grizzly-polar bear hybrid shot but it’s not a sign of climate change

CBC News this morning (“Grolar or pizzly? Experts say rare grizzly-polar bear hybrid shot in Nunavut: Expert says interbreeding may be happening more frequently due to climate change“) suggests that a putative grizzly x polar bear hybrid bear shot outside Arviat in Western Hudson Bay is a sign of climate change, based on an interview with a black bear expert from Minnesota. 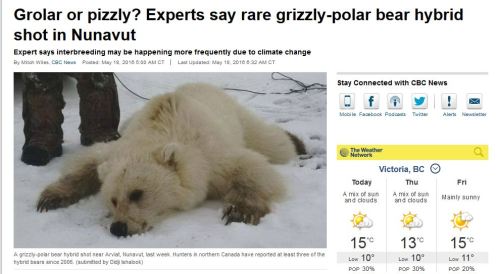 This bogus claim has been busted so many times it’s a wonder it still arises – even polar bear specialist Ian Stirling has said flat out that such hybrids are not due to climate change. On top of that, some of the details regarding this putative hybrid make me want to wait for confirmation from DNA testing before adding it to the roster of known hybrids.
END_OF_DOCUMENT_TOKEN_TO_BE_REPLACED