Posted on July 4, 2013 | Comments Off on Great polar bear red herring in the Southern Beaufort

For example, even though Ian Stirling and colleagues argued in their 2008 paper that the thick spring ice conditions in 2004, 2005 and 2006 (but not those in previous decades) were caused by storms initiated or intensified by greater amounts of open water in previous summers, they did not deny that the thick-ice springs occurred. They stated quite clearly that:

“The 1960s, 1970s, and 1980s each experienced a two- to three-year decline in seal productivity in the eastern Beaufort Sea and Amundsen Gulf, associated with heavy ice conditions, around mid-decade. Each was followed by a decline in polar bear reproduction and condition, after which both seal and bear populations recovered (Smith, 1987; Harwood et al., 2000; Stirling, 2002). The beginning of each of those three periods was associated with heavy ice conditions through the winter before the reproductive decline of the seals, followed by a late spring breakup.” [my bold]

So, I have to say, I was shocked but not surprised to find that in the more recent scientific literature, the phenomenon of thick-ice springs every decade in Southern and Northern Beaufort has been deliberately ‘disappeared.’

Not surprised because I suspected it had happened — this issue was a feature of the Stirling and Derocher (2012) paper from late last year which was the topic of my very first blog post, “Cooling the polar bear spin.”

However, I think it is important to document how the transmogrification of sea ice effects on polar bears was managed in the scientific literature so that everyone can see exactly what has been done. In a truly astonishing move for what is supposed to be a field of science, thick-ice springs have been effectively replaced by an open-water red herring as the scourge of Southern Beaufort polar bears.

Shortly after the Stirling et al. paper (quoted from above) was published in 2008, Alaskan polar bear researchers abandoned the implausible ‘storms cause thick spring ice’ proposal that it included, probably because it accepted the premise that thick-ice springs were the ultimate cause of polar bear woes in the Beaufort Sea. Not only was the ‘storms cause thick spring ice’ premise a weak argument, it also didn’t fit the big-picture story that was being developed at the time: that declines in summer sea extent are the biggest threat to polar bears everywhere (see previous post here).

Cherry et al. examined indicators of fasting in blood samples taken from bears in the Eastern Beaufort [there is the ‘Eastern Beaufort’ again as a study area but not a formal subpopulation] during April and May of 1985/1986 and 2005/2006.  They found:

Feigning ignorance of past studies (even though Ian Stirling was a co-author), the ‘fasting’ paper concluded that:

“the recent increase in bears fasting during April and May suggests that there has been a decrease in prey availability at that time of year. …the precise means through which prey have apparently become less available to polar bears in the Beaufort Sea remains unknown.” [my bold]

Cherry et al. went on to infer, without actually coming out and saying so, that the likely cause of the increased fasting in the spring of 2005 and the spring of 2006 was reduced ice in summer and more open water.

A useful bridge has to lead somewhere and the student-led fasting paper (Cherry et al.) was followed in 2010 by one written by a much more experienced research team. Led by by Eric Regehr (with Ian Stirling again one of the co-authors) “evaluated the effects of sea ice conditions on vital rates (survival and breeding probabilities) for polar bears in the southern Beaufort Sea,” using models. It was based on only five years of data (collected from 2001 to 2006) on polar bears and number of ice-free days each year. They concluded:

“In the most supported models, polar bear survival declined with an increasing number of days per year that waters over the continental shelf were ice free. In 2001–2003, the ice-free period was relatively short (mean 101 days) and adult female survival was high (0·96–0·99, depending on reproductive state). In 2004 and 2005, the ice-free period was longer (mean 135 days) and adult female survival was low (0·73–0·79, depending on reproductive state). Breeding rates and cub litter survival also declined with increasing duration of the ice-free period. Confidence intervals on vital rate estimates were wide.” [my bold]

Unbelievable. No mention at all of the 50-year history of thick-ice springs in this region, replaced by a handy ‘correlation‘ with open water. [See also previous post here for a critique of the mark-recapture methods and models used in this study]

Because Regehr et al. did not consider whether thick ice in spring had an effect on polar bear survival in their 2010 paper, they found a correlation with increased open water a few months later in the year – hardly surprising. Hardly surprising but also, hardly scientific.

A companion paper (Rode et al. 2010) on polar bear body condition and growth in the Southern Beaufort does something similar as Regehr et al.’ s ‘open water vs. survival’ paper – both cite the other as corroborative evidence, and both reference the Cherry et al. ‘fasting’ paper.

The Rode et al. 2010 ‘open water vs. body condition’ paper used data from a longer period (1982 to 2006) and looked at changes over time in body condition (relative fatness) and growth patterns of polar bears in relation to changes in the availability of ice areas (in km2) “most frequently used by polar bears.” The study did not address sea ice conditions per se, and as for the Regehr et al. 2010 ‘open water vs. survival’ study, nowhere in the paper was the phenomenon of thick-ice springs even mentioned.

Finally, as confirmation that the bridge to the open water red herring has been successfully built, we now have an “in review” paper co-authored by Rode, Regehr and others waiting in the wings (summarized by Rode et al. 2013, a conference presentation), entitled “Variation in the response of an Arctic top predator experiencing habitat loss: feeding and reproductive ecology of two polar bear populations.” I’ll have more to say about it later.

This ‘in review’ paper merges the Regehr et al. 2010 ‘open water vs. survival’ and Rode et al. 2010 ‘open water vs. body condition’ conclusions as fact and develops the entire storyline: recent declines in body condition and survival of polar bears in the Southern Beaufort are correlated with more open water and declining sea ice caused by global warming – with a very strong implication that ‘correlated’ means ‘caused by.’

Finally, we have the Stirling and Derocher ‘review of evidence’ paper [summarizing the “documented” effects of global warming on polar bears, now in print], which neatly foresaw this transmogrification and integrated it into their big-picture story.

The scientific paper trail for the red herring is now complete.

And to avoid any inconvenient data related to the thick-ice springs phenomenon arising in future, the focus of research effort in the Southern Beaufort has been shifted from spring to late summer/early fall (Fish & Wildlife Service 2009; Polar Bear News 2010; Regehr et al. 2010; Rode and Regehr 2010). 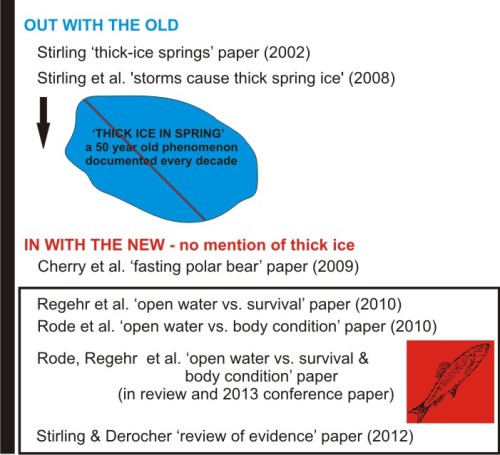 Rode, K. and Regehr, E.V. 2010. Polar bear research in the Chukchi and Bering Seas: A synopsis of 2010 field work. Unpublished report to the US Fish and Wildlife Service, Department of the Interior, Anchorage. Pdf here. http://arctic.synergiesprairies.ca/arctic/index.php/arctic/issue/view/42