Posted on September 15, 2013 | Comments Off on Record sea ice loss in 2007 had no effect on polar bears, Chukchi study confirms

One aspect of the recently published study on Chukchi Sea polar bears (Rode et al.2014 [now in print] ; see here and here) has not been stressed enough: their finding that the differences in overall condition between bears in the Chukchi and Southern Beaufort Seas came down to disparities in spring feeding opportunities and therefore, the condition of spring sea ice.

The fact that spring — not summer — is the most critical period for polar bears is something I’ve pointed out before (see here and here, for example) but it’s worth repeating at this time of year, when all eyes are on the annual ice minimum. It is often treated as a given that the decline in extent of summer sea ice in the Arctic since 1979 has been detrimental to polar bears. However, this is an assumption that we can now say is not supported by scientific evidence (see summary of that evidence here).

The results published by Rode et al. (2014 ) not only add further support to the conclusion that declines in summer sea ice have not harmed polar bears, but should put the matter to rest – unless new evidence to the contrary is produced.

Chukchi bears, the report tells us, had more food available in the spring than Southern Beaufort bears (see map below) and this was the primary reason that bears were doing very well in the Chukchi and not quite as well in the Southern Beaufort. And because the polar bears for this study were captured and measured in mid-March to early May, from 2008 to 2011, they reflect spring-time conditions for 2008-2011 as well as year-round conditions from 2007 through 2010.

This means that the annual low ice extent for 2007 (record-breaking at the time), in the fall before this study began, had no discernible negative effect on either Chukchi or Southern Beaufort polar bears – and neither did similarly low annual minimums in two of the three remaining years of the study (Fig 1).

A summary statement posted by the US Fish & Wildlife Service on the Rode et al. paper, written by co-author Eric Regehr (pdf here), says this about the results:

“Although diets were similar for the two populations, the Chukchi Sea bears had greater access to food in the spring.” [my bold]

“Condition and reproduction of ringed seals and bearded seals, which comprise almost 80% of polar bear diets in the CS [Chukchi Sea], have either increased or remained stable since the 1970s.  Pregnancy rates among ringed seals in the CS were the second highest recorded and females are maturing at the youngest age reported. Ringed seal pups are one of the most important food sources for polar bears (Pilfold et al., 2012) and high proportions of ringed seal pups in subsistence harvest samples in the CS suggest they are abundant. ”

Spring is when most polar bear feeding takes place because newborn ringed seal pups are only available from March through May, when there is still lots of ice around (Fig. 2). 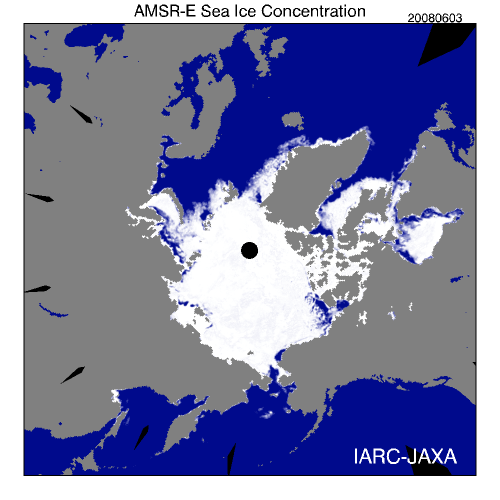 Figure 2. Sea ice extent at the beginning of summer 2008 (June 3: downloaded Sept. 14, 2013 from IARC-JAXA, Arctic Sea-ice Monitor), when the sea ice started to break up in the western Arctic.

Rode et al. assumed that amount of summer sea ice should make a difference between the Chukchi and the Southern Beaufort, and tried to correlate features like body condition and litter size with declines in summer sea ice.

But in the end, the correlation was a poor fit:

Instead, the factor that made the largest difference in overall condition (body fat plus litter production) between the two regions was spring feeding.

In the spring, Chukchi bears over the period 2008 to 2011 had access to a bumper-crop of ringed seal pups, while Southern Beaufort bears did not — due to the effects of thick spring ice (see previous posts here, here, and Footnote 1 below regarding spring ice conditions in the Eastern Beaufort, where most of the “Southern Beaufort” research has been conducted).

Footnote 1:
Oddly, Rode et al. sampled bears for evidence of fasting in the Chukchi in 2008-2011 but did not do the same for Southern Beaufort bears, who were sampled for fasting indicators only in 2004-2005, by another researcher (Cherry et al. 2009).

“Our evaluation of nutritional ecology for polar bears is consistent with lower prey availability in the SB [Southern Beaufort] compared to the CS [Chukchi Sea]. Only 8% of polar bears captured in the CS appeared to be fasting in spring, compared to 21.4 and 29.3% of bears fasting in the SB in spring 2005 and 2006, respectively (Cherry et al., 2009). In the CS, the majority of fasting bears were adult males (92% of fasting bears) who may forgo foraging to pursue females during the mating season (Ramsay et al., 1991; Cherry et al., 2009). The SB, in contrast, had 20-25% of adult females (including separate categories of females with and without dependent young) and > 15% of subadults fasting.

Consumption of larger prey species [like walrus] or carrion [like whale] or a greater diversity of prey does not appear to explain the difference in body size and condition observed between CS and SB bears.” [my bold]

In other words, all except one of the Chukchi bears that were fasting were males that were distracted by their sex drive, not because there wasn’t enough food to eat, while a significant portion of Southern Beaufort females and subadults were not eating because they were having trouble finding seals (at the precise time they should be consuming as much food as possible).

In fact, all of the evidence that Rode et al. present for a decline in body condition for ringed seals in the Southern Beaufort – and associated declines in condition of polar bears in 2004 and 2005 – are studies conducted in the far eastern portion of the Beaufort only, not the entire length of the northern Alaska coastline (discussed here and here).

And as I have noted previously (here), Ian Stirling and colleagues (2008) admitted that thick-ice springs occurred from 2004-2006, were similar to previous incidents, and had significant impacts on both ringed seals and polar bears:

“The 1960s, 1970s, and 1980s each experienced a two- to three-year decline in seal productivity in the eastern Beaufort Sea and Amundsen Gulf, associated with heavy ice conditions, around mid-decade. Each was followed by a decline in polar bear reproduction and condition, after which both seal and bear populations recovered (Smith, 1987; Harwood et al., 2000; Stirling, 2002). The beginning of each of those three periods was associated with heavy ice conditions through the winter before the reproductive decline of the seals, followed by a late spring breakup.”

“From 2003 through 2006, large areas of the annual landfast ice from northeast of Atkinson Point to the Alaska border (Fig. 1) were compressed into high pressure ridges interspersed with extensive areas of rafted floes and rubble (especially in 2005; Fig. 2). In some places, these areas extended offshore form the mainland coast for tens of kilometers. Such heavy ice reduces the availability of low consolidated ridges and refrozen leads with accompanying snowdrifts typically used by ringed seals for birth and haul-out lairs (Smith and Stirling, 1975, 1978). Although we were unable to make a quantified comparison, our subjective impression is that in 12 previous spring field seasons surveying the same area for polar bears (1971-79, 1985-87) only once, in 1974, did we observe similarly extensive areas of rubble, pressure ridges, and rafted floes.” [my bold]

See previous post (here) about the polar bear starvation that occurred in 1974.