END_OF_DOCUMENT_TOKEN_TO_BE_REPLACED

Posted on September 15, 2013 | Comments Off on Record sea ice loss in 2007 had no effect on polar bears, Chukchi study confirms

One aspect of the recently published study on Chukchi Sea polar bears (Rode et al.2014 [now in print] ; see here and here) has not been stressed enough: their finding that the differences in overall condition between bears in the Chukchi and Southern Beaufort Seas came down to disparities in spring feeding opportunities and therefore, the condition of spring sea ice.

The fact that spring — not summer — is the most critical period for polar bears is something I’ve pointed out before (see here and here, for example) but it’s worth repeating at this time of year, when all eyes are on the annual ice minimum. It is often treated as a given that the decline in extent of summer sea ice in the Arctic since 1979 has been detrimental to polar bears. However, this is an assumption that we can now say is not supported by scientific evidence (see summary of that evidence here).

The results published by Rode et al. (2014 ) not only add further support to the conclusion that declines in summer sea ice have not harmed polar bears, but should put the matter to rest – unless new evidence to the contrary is produced.

Chukchi bears, the report tells us, had more food available in the spring than Southern Beaufort bears (see map below) and this was the primary reason that bears were doing very well in the Chukchi and not quite as well in the Southern Beaufort. And because the polar bears for this study were captured and measured in mid-March to early May, from 2008 to 2011, they reflect spring-time conditions for 2008-2011 as well as year-round conditions from 2007 through 2010.

This means that the annual low ice extent for 2007 (record-breaking at the time), in the fall before this study began, had no discernible negative effect on either Chukchi or Southern Beaufort polar bears – and neither did similarly low annual minimums in two of the three remaining years of the study (Fig 1). 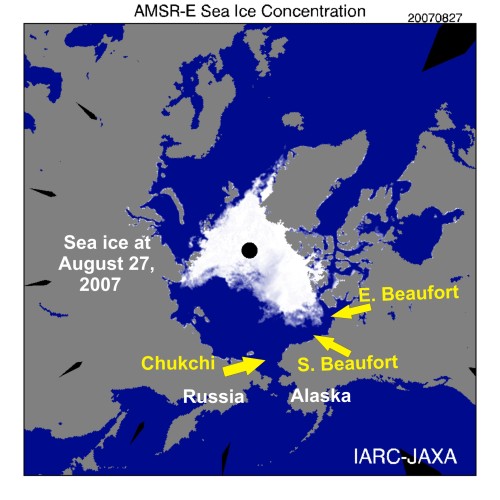 END_OF_DOCUMENT_TOKEN_TO_BE_REPLACED

Comments Off on Record sea ice loss in 2007 had no effect on polar bears, Chukchi study confirms