Posted on July 20, 2014 | Comments Off on Polar bears and melting ice: three facts that shouldn’t surprise you

If I was invited by USA TODAY to discuss how climate change is affecting polar bears now – summed up in three talking points – this is what I’d say. I’d use some meaningful images rather than cute pictures of cuddly bear cubs and I’d provide links to my work with references and details to back up my answers.

Compare my responses to those supplied by Steve Amstrup in his capacity as spokesperson for Polar Bears International (“Save our sea ice!”) to Jolie Lee at USA TODAY last week, who’s word is expected to be taken as gospel. 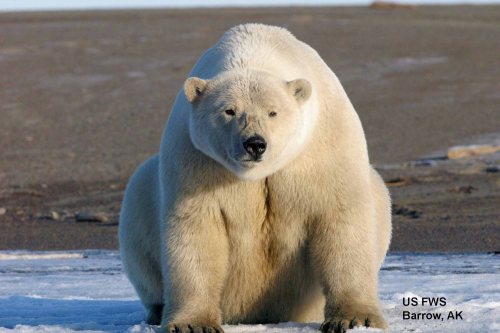 Not disappearing – predicted to disappear, which is a different thing altogether.

In fact, biologists at the IUCN Polar Bear Specialist Group estimate that there must be more than 20,000-25,000 bears in the world, a number that hasn’t changed since 2001.

I say “more than 20,000-25,000” because a few large areas exist where polar bears live but have never been studied or counted, so the global estimate does not include those bears. Polar bears are also well distributed across available Arctic habitats, an accepted mark of a species in good health. [See more here, here, and here]

The computer-models that predicted two-thirds of the worlds polar bears will be gone by 2050 were based on assumptions made by Steve Amstrup regarding how polar bears will respond to predicted declines in sea ice. However, studies conducted since then have shown that many of these assumptions are wrong. It follows then, that the predictions of population decline cannot possibly be correct. [See more here, here, and here]

In addition, the two populations that appeared at one point to be declining due to summer sea ice loss (Western Hudson Bay, WHB and Southern Beaufort, SB) — triggering the 2008 ‘threatened with extinction’ classification in the USA — had serious issues with their population estimates. It now seems polar bears simply move around a bit as ice conditions change at the local level, which is what we would expect them to do. [See more here, here,and here]

Polar bears do most of their feeding on the ice during the spring and early summer (February to June) and the extent of ice in those seasons has declined very little over the last 35 years (see below).[More here] 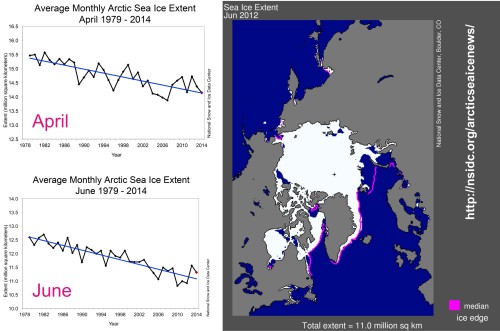 Polar bears in most areas of the Arctic are at their fattest by mid-July and well prepared to go without food for a few months if necessary – a late summer fast is normal. Putting on hundreds of pounds of fat in the spring to last through periods of food scarcity later in the year (whether it comes at the end of summer or over the winter) is the evolutionary adaptation that has allowed polar bears to live successfully in the Arctic. [See more here and here]

Cannibalism in polar bears hit the news for a few years and was touted as a sign that bears were starving – literally eating each other to survive because they were starving (“nutritionally stressed”).

However, none of the recent incidents involved bears known to be starving (i.e., thin) and in fact, a few bears that killed and ate other bears were very fat. [See more here, and here]

Most importantly, since 2011, there have been no further incidents of cannibalism reported, even though the lowest extent of sea ice recorded in late summer over the last 35 years occurred in 2012. Google it and see for yourself. There is no evidence to support the notion that incidents have been increasing or that less summer ice means more cannibalism .

In fact, the majority of cases of cannibalism reported (for 2004-2006 and back in 1976) were associated with especially thick sea ice conditions in the Southern Beaufort in spring, not less summer ice. [See details here and here]

Ironically, in 1985, polar bear biologist Thor Larsen was concerned that population increases since the early 1970s was causing an increase in cannibalism. [See Featured Quote #8]

There are more people living in Arctic communities than there were in the 1970s, and many more people visit these areas than ever before. Polar bear populations have increased since the 1970s as well, putting people and bears into contact more often (1988 PBSG report, Amstrup and Wiig 1991:14). Put simply, more bears plus more people in the Arctic means more conflicts (including attacks on people).

It has been suggested that more bears are being attracted to Arctic communities now because they are starving [See more here, here, and here.]

But not eating (“fasting”) during the summer ice-free period is a normal part of being a polar bear – many of them fast during the coldest, darkest part of the winter as well. A fasting bear is not starving, it’s hibernating.

Fasting for polar bears is their “hibernation” – because they don’t have to enter a den for their metabolism to slow down, biologists call polar bears “walking hibernators.” Actual starvation results when a bear has been unable to put on enough fat reserves during the spring feeding period because it is sick, old, an inexperienced or poor hunter, or is the cub of a young mother who is a poor hunter. [See Featured Quote #26, here and here]

The only “problem” polar bear I’ve seen reported recently that falls into this “nutritionally stressed” category is a bear that’s been hanging around Arviat [see map here] in the northern part of Western Hudson Bay since early July (see news stories here and here). Described as “gaunt,” there is no way this particular bear will survive the ice-free season — if it is true that he’s already thin, he should be humanely put down immediately, for the sake of the community and himself.

Ironically, in 1974 polar bear biologist Ian Stirling was concerned that increasing bear numbers combined with lack of hunting would cause more human-bear conflicts (Read about it here).

Amstrup’s answers below and the full story here: contrast and compare.

Polar bears are considered a threatened species in the USA. An estimated 20,000-25,000 polar bears remain worldwide, but Amstrup predicts two-thirds of the population will be gone by midcentury.

Polar bears feed on seals that they hunt on sea ice. Seals are rarely on land, and it’s even more rare for polar bears to catch seals in the water.

“Regardless of how many seals there might be, polar bears don’t have access to them without the sea ice,” Amstrup said.

Since 1979, Arctic sea ice in September has been declining at a rate of about 13% per decade, according to the National Snow and Ice Data Center.

The melting ice correlates to the planet’s rising temperature over the past century, according to NASA measurements of global ocean-land temperatures.

September is when the Arctic sea ice is at its lowest size. Historically, over most of their range, polar bears hunt on the ice through the summer, fall and into the winter.

Researchers think the longer ice-free seasons that have prevented polar bears from getting to seals are forcing them to find other sources of nutrition — each other.

All bears will eat other bears in certain circumstances, including for population regulation, reproductive advantage or establishing dominance, according to a 2006 study Amstrup published in the journal Polar Biology.

But in recent years, researchers observed behavior they’d never seen before: polar bears “stalking, killing and eating” other polar bears, according to the study.

Amstrup and fellow scientists recorded three separate incidents of cannibalism in Alaska and Canada between January and April 2004.

“We can’t say for sure that this is the fingerprint of climate change, but it’s consistent with the kinds of things you expect to see when a population is nutritionally stressed,” Amstrup said.

[SJC aside: Remember last year when Amstrup told author Zak Unger that it was the media who was making a big deal about cannibalism?]

To find food, polar bears are traveling to places they don’t normally go. Specifically, they’re showing up in villages, which has happened in northern Canada, Amstrup said.

Because of these increased sightings, some people may wrongly think the polar bear population is growing, Amstrup said.

The fact is, their population overall is shrinking, he said.

“A polar bear is not going to lay down and die when it’s hungry,” Amstrup said. What we’re seeing now is bears “becoming very common where (before) they were uncommonly seen.”