Posted on March 16, 2015 | Comments Off on No evidence of actual damage to polar bear brains from environmental contaminants

Earlier this year we had polar bear penis bones supposedly breaking due to environmental toxins; this week we have their brains damaged.

The March 15 ScienceNordic story (“Chemical pollution is causing brain damage in polar bears”) came complete with a photo of a bear (copied below, provided by research co-author Rune Dietz) that is presumably meant to convey what a “brain damaged” polar bear might look like — if not, perhaps another photo would have been a better choice? 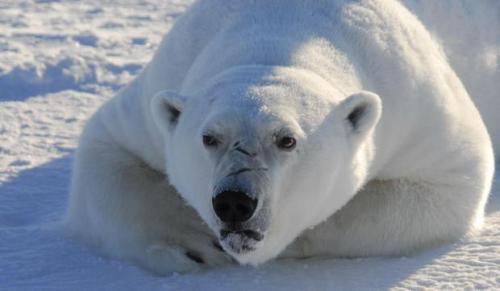 Except, the research only showed there theoretically might be damage but the researchers didn’t bother looking for it before shouting out their findings. All about the scary message, these folks: the very large uncertainties and speculation in their research be damned.

In fact, the “brain damage” of the ScienceNordic headline is grossly misleading: the authors of the paper which this article summarizes have no evidence that even temporary brain function has been compromised in polar bears, let alone that permanent brain damage has occurred.

From the abstract of the paper itself (Pederson et al. 2015, copied below):

“It is not known whether the observed alterations in neurochemical signaling are currently having negative effects on neurochemistry in East Greenland polar bears.”

In short, this paper is merely another in a long line of papers on the same theme, that goes back more than a decade — none of them reporting any concrete evidence that any real effects have been manifested in living bears, not even in bears from East Greenland which apparently have the highest concentrations of these chemicals.

All things considered, I really should not have been surprised to find that by this morning, the MailOnline (UK) had picked up on the ScienceNordic story and run away with it: “Is pollution giving polar bears brain damage?”

This writer apparently found the notion that human-generated chemicals might cause bad things to happen in polar bear brains some day to be not quite scary enough, so went on to reiterate the penis-bone-weakening story from January 2015 (based on a paper by Sonne et al., discussed here) and the gloomy prognosis for Central Canadian polar bears generated in another paper published last fall (Hamilton et al. 2014).

Talk about recycling and bundling for maximum effect!

I discussed the Hamilton et al. paper when it came out (here): I wasn’t impressed. Still, it was actively promoted to the press by Hamilton’s Ph.D. supervisor (and co-author of the paper), Andrew Derocher — at his pessimistic best. The media lapped it up:

“It doesn’t look too good,” said Andrew Derocher of the University of Alberta in Edmonton and one of the authors of the study.

The model used by the researchers is one of the worst-case scenarios for climate change, said Derocher.

“I would argue that right now, we are pretty much on the worst case scenario trajectory to climate change.” [my bold]

Why does it so often seem that polar bear researchers are simply writing scripts for a scary-story-hungry media? Considering that we still don’t know how many bears there are in the world, is this what precious funding should be going towards?

Competing interests: The authors have the following interests: Quark Expeditions is a commercial tour company that provided the authors with a donation for research with no conditions. Co-author David Huard is employed by David Huard Solutions. There are no patents, products in development or marketed products to declare. This does not alter the authors’ adherence to all the PLOS ONE policies on sharing data and materials.

Abstract
Perfluoroalkyl substances (PFASs) is a growing class of contaminants in the Arctic environment, and include the established perfluorinated sulfonates (PFSAs; especially perfluorooctane sulfonate (PFOS)) and carboxylic acids (PFCAs). PFSAs and PFCAs of varying chain length have been reported to bioaccumulate in lipid rich tissues of the brain among other tissues such as liver, and can reach high concentrations in top predators including the polar bear. PFCA and PFSA bioaccummulation in the brain has the potential to pose neurotoxic effects and therefore we conducted a study to investigate if variations in neurochemical transmitter systems i.e. the cholinergic, glutaminergic, dopaminergic and GABAergic, could be related to brain-specific bioaccumulation of PFASs in East Greenland polar bears. Nine brain regions from nine polar bears were analyzed for enzyme activity (monoamine oxidase (MAO), acetylcholinesterase (AChE) and glutamine synthetase (GS)) and receptor density (dopamine-2 (D2), muscarinic cholinergic (mAChR) and gamma-butyric acid type A (GABA-A)) along with PFSA and PFCA concentrations. Average brain ∑PFSA concentration was 25ng/g ww where PFOS accounted for 91%. Average ∑PFCA concentration was 88ng/g ww where PFUnDA, PFDoDA and PFTrDA combined accounted for 79%. The highest concentrations of PFASs were measured in brain stem, cerebellum and hippocampus. Correlative analyses were performed both across and within brain regions. Significant positive correlations were found between PFASs and MAO activity in occipital lobe (e.g. ∑PFCA; rp=0.83, p=0.041, n=6) and across brain regions (e.g. ∑PFCA; rp=0.47, p=0.001, ∑PFSA; rp=0.44, p>0.001; n=50). GABA-A receptor density was positively correlated with two PFASs across brain regions (PFOS; rp=0.33, p=0.02 and PFDoDA; rp=0.34, p=0.014; n=52). Significant negative correlations were found between mAChR density and PFASs in cerebellum (e.g. ∑PFCA; rp=-0.95, p=0.013, n=5) and across brain regions (e.g. ∑PFCA; rp=-0.40, p=0.003, ∑PFSA; rp=-0.37, p=0.007; n=52). AChE activity and D2 density were negatively correlated with single PFCAs in several brain regions, whereas GS activity was positively correlated with PFASs primarily in occipital lobe. Results from the present study support the hypothesis that PFAS concentrations in polar bears from East Greenland have exceeded the threshold limits for neurochemical alterations. It is not known whether the observed alterations in neurochemical signaling are currently having negative effects on neurochemistry in East Greenland polar bears. However given the importance of these systems in cognitive processes and motor function, the present results indicate an urgent need for a better understanding of neurochemical effects of PFAS exposure to wildlife. [my bold]