One starving bear is not evidence of climate change, despite gruesome photos

Posted on December 9, 2017 | Comments Off on One starving bear is not evidence of climate change, despite gruesome photos

We finally have this year’s example of the new fad of claiming every polar bear that died of starvation (or on its way to starving to death) — and caught on film — is a victim of climate change: a young bear on Somerset Island near Baffin Island, Nunavut filmed in August during its last agonizing hours by members of an activist conservation organization called SeaLegacy.

“‘I filmed with tears rolling down my cheeks’: Heart-breaking footage shows a starving polar bear on its deathbed struggling to walk on iceless land.” [actual title of article in the DailyMail Online, 8 December 2017]. CBC Radio (8 December 2017) jumped on it as well, as have others. National Geographic ran a similar story, like others, that compliantly emphasized the future man-made global warming threat the photographers were touting. 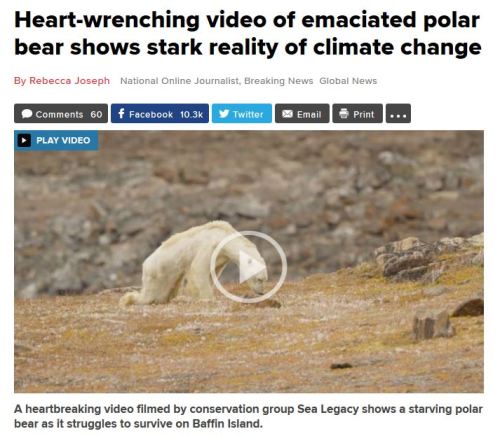 UPDATE 11 December 2017: an Arctic seal specialist, Jeff Higdon, has weighed in via twitter about the possible cause of death of this bear and also what the SeaLegacy team should have done when they found the bear in this condition. See below

END_OF_DOCUMENT_TOKEN_TO_BE_REPLACED

Comments Off on One starving bear is not evidence of climate change, despite gruesome photos

Posted on April 20, 2017 | Comments Off on New genetics paper is not about whether climate change causes polar bear hybrids

A new paper on the evolutionary history of bears (Bears breed across species borders: Kumar et al. 2017) has concluded that hybridization is common and natural among all species of ursids. And while some media outlets (e.g. DailyMail) have framed this as surprisingly convincing proof that experts were wrong to claim that climate change is the cause of recent polar bear X grizzly hybrids, definitive evidence against that interpretation has been available for years to anyone who bothered to look: see my recent “Five facts that challenge hybridization nonsense.”

This genetic evidence is just a cherry on top of the rest but will help get the paper the media attention the authors crave.

Polar bear X grizzly hybrids were known long before climate change and sea ice decline became an issue. See also previous posts here, here, and here. In fact, as I’ve pointed out, “most polar bear hybrids said to exist have not been confirmed by DNA testing” (including virtually all of the bears specialist Andrew Derocher claimed were hybrids, including the latest one from 2016 that prompted such gems as “Love in the time of climate change”). 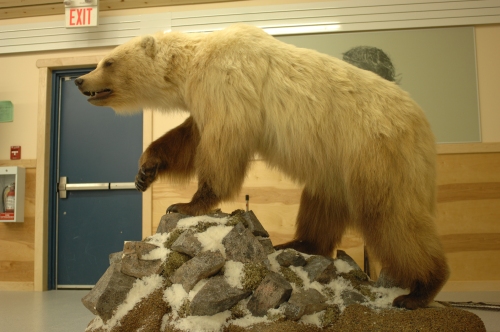 In my opinion, the most important conclusion of this paper is that occasional but widespread hybridization among bears is why it has been so hard to say with confidence when polar bears arose (which I addressed years ago, in my Polar bear evolution series: Part 1, Part 2, and Part 3). You cannot use traditional methods of pinpointing the timing of speciation events from genetic data if one or more of the species have hybridized (traded genes). See the long, fuzzy “divergence times” for bears in the image below from the Kumar paper.

END_OF_DOCUMENT_TOKEN_TO_BE_REPLACED

Posted on May 3, 2016 | Comments Off on Longest-swimming polar bear lost less weight than if she had stayed onshore

Recent media hype over swimming polar bears in the Southern Beaufort has been quite spectacular (still going strong today at the Washington Post here) but a close look at relevant data shows the message is bogus. Researchers admit (in their methods section) they couldn’t tell if bears said to have swum “non-stop” actually hauled out for half a day or more to rest on small ice flows invisible to satellites and astonishingly, the bear getting all the media attention – who swam the longest of any bear – lost less weight than a bear would have done simply sitting on shore for the same length of time. 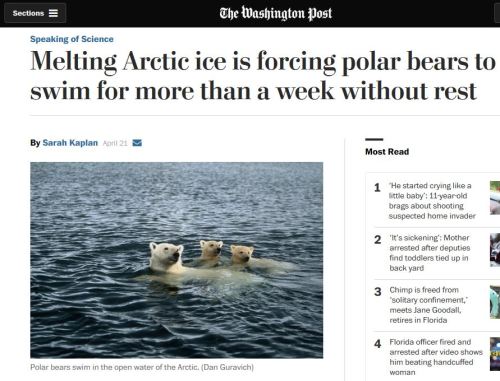 END_OF_DOCUMENT_TOKEN_TO_BE_REPLACED

Posted on March 16, 2015 | Comments Off on No evidence of actual damage to polar bear brains from environmental contaminants

Earlier this year we had polar bear penis bones supposedly breaking due to environmental toxins; this week we have their brains damaged.

The March 15 ScienceNordic story (“Chemical pollution is causing brain damage in polar bears”) came complete with a photo of a bear (copied below, provided by research co-author Rune Dietz) that is presumably meant to convey what a “brain damaged” polar bear might look like — if not, perhaps another photo would have been a better choice?

Except, the research only showed there theoretically might be damage but the researchers didn’t bother looking for it before shouting out their findings. All about the scary message, these folks: the very large uncertainties and speculation in their research be damned.
END_OF_DOCUMENT_TOKEN_TO_BE_REPLACED

Where have all the walrus gone?

Yes, I wondered too. After all the kerfuffle at the beginning of the month there’s been rather dead silence [see my last post here]. So I Googled and found some tidbits.

An article a few days ago at one media outlet (October 8, 2014) asked someone from the WWF what happened to the ~35,000 females and calves onshore near Point Lay, Alaska — because really, who else would you ask? Or, perhaps more to the point, would anyone at USGS be expected to answer?

And one online media outlet found walrus specialists in Alaska unwilling to lay all the blame for the recent massive haulout at Point Lay at the feet of low Arctic ice levels due to global warming. See what you think.

Comments Off on Where have all the walrus gone?

Posted on August 28, 2014 | Comments Off on Reflections on my House of Lords lecture: Healthy polar bears, less than healthy science

Here is an excerpt of an essay I wrote reflecting on the recent (11 June 2014) lecture I gave at the House of Lords in London (“Healthy polar bears, less than healthy science”). The Global Warming Policy Foundation (GWPF) has just published that 14 page essay in its entirety as its 10th such report but you can get a taste of it here.

My piece addressed the following issues that I talked about in the lecture or which came up afterwards during the question period and discussions later:

•  On what do you base your assertion that polar bear populations are “healthy”?
•  Are the media — or polar bear scientists — to blame for hyping the “polar bears are dying” meme?
•  How significant was the recent dismissal of a petition to force Canada into listing polar bears as ‘threatened with extinction’?
•  What do the recent actions of the Polar Bear Specialist Group say about their commitment to good science?
•  Is my blog helping to “self-correct” the science on polar bears?

The highlighted point is copied in full below. See the full essay here.
END_OF_DOCUMENT_TOKEN_TO_BE_REPLACED

Comments Off on Reflections on my House of Lords lecture: Healthy polar bears, less than healthy science