Posted on June 5, 2015 | Comments Off on Hudson Bay breakup date for 2015 will really depend on which definition you use

Is breakup imminent for Hudson Bay sea ice? Probably not, but this year more than ever, it will depend on how you define it.

Despite a large patch of open water in western Hudson Bay (CIS chart above, for 1 June), there is still more than 70% sea ice coverage over the entire bay as of this week, when you use the standard breakup definition of 50% ice coverage (Fig. 1).  Ice remaining over the bay is mostly 90% or greater, as the chart above shows – which means there is still a lot of polar bear hunting habitat remaining. 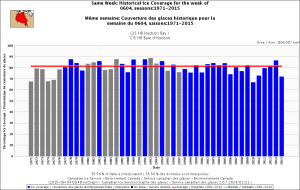 The interconnected region of Hudson Bay, Hudson Strait, and southern Davis Strait (Fig. 2), what the Canadian Ice Service calls “Regional Hudson Bay,” is only slightly below average for the week of 4 June.

Since ice concentration is factored into breakup date calculation, a record-early breakup is simply not possible, since the previous record date (2 June, for 1990) has already passed. It might be an earlier than average breakup year but not very early, based on the 50% coverage definition (Fig. 3, below). This year, because of the unusual pattern of breakup of Hudson Bay ice, it will be critical for polar bears which definition of breakup is used – the old, 50% method (adopted because it’s what sea ice professionals used) or the newest one, which was determined to be most relevant to WHB polar bears (Cherry et al. 2013).

UPDATE 6 June 2015: I’ve added the forecast for ice conditions over the summer for North America (which for these folks includes June because it’s aimed at temperate NA, polar bear folks call June the end of spring), provided by the Canadian Ice Service: “Seasonal outlook for North American Arctic Waters issued by the North American Ice Service on 2 June 2015” [points of potential interest marked] The sea ice forecast (Table 1) for southwestern Hudson Bay (where most western and southern Hudson Bay polar bears come ashore) is for complete ice melt by 1 Aug, eight days later than the earliest date over the period 1968-2013. Time will tell if that’s what happens.

I have to say, it continues to perplex me why the polar bear biologists who wrote the latest report on the status of the population in Western Hudson Bay (Lunn et al. 2013, Fig. 3) chose to use the old method of defining breakup rather than the new method developed specifically for WHB polar bears. Nick Lunn was a co-author of the the Cherry et al. paper; Andrew Derocher was Cherry’s graduate supervisor and second author of the paper, which was the topic of Cherry’s Ph.D. research (see “References” below). According to that paper, discussed previously here and here:

Fig. 3 shows the breakup dates published by Lunn et al. (2013) for Western Hudson Bay, which uses the 50% ice coverage definition of breakup. I’ve labelled a few of them to make it faster to see which years are early and which ones are late.

Figure 3. Breakup dates for Western Hudson Bay since 1979, according to Lunn et al. 2013, using the definition of breakup as 50% sea ice coverage. Click to enlarge.

Given the state of the ice at this point in the season (Figs. 5-7 below), it’s clear that breakup by the 50% coverage definition is not imminent. Most of the ice remaining over the entire Hudson Bay at 1 June 2015 was classified as “thick first year ice” (Fig. 5):

Combined with the fact that most of this ice is concentrated (90% or more, Fig. 6) tells us the ice is not rapidly disintegrating as one would expect when the date of “breakup” is approaching using a 50% coverage definition (which takes concentration into account by dividing the bay into squares and assessing concentration on a grid-by-grid basis):

However, I’d still like to know: having determined that 30% ice coverage over the WHB polar bear subpopulation region is the best predictor of when WHB polar bears come ashore, why have polar bear biologists dropped this definition like a hot potato in their published analyses in favour of the 50% definition? And given the condition of the ice on Hudson Bay on 1 June, why would polar bear biologist Andrew Derocher suggest that 2015 could be the earliest breakup on record? Has he decided to use Cherry’s method (Fig. 8, compare to Fig. 6-7), now that it has the potential to suit a narrative of global warming causing harm to WHB bears?

My research focuses primarily on developing methods to assess and predict the effects of sea ice dynamics on polar bear populations. My thesis will examine various aspects of polar bear ecology in relation to seasonal and long-term changes in sea ice composition. I will focus on polar bears in 2 regions of Canada that are currently facing climate induced changes to sea-ice habitat: western Hudson Bay, Manitoba and the Beaufort Sea, Northwest Territories.