It’s the middle of July – do researchers know where their Hudson Bay polar bears are?

Posted on July 14, 2015 | Comments Off on It’s the middle of July – do researchers know where their Hudson Bay polar bears are?

If so, they’re not saying. This year, with higher-than-average sea ice, we’ve heard much less than usual about the location of tagged Hudson Bay polar bears. Odd, isn’t it?

This year, there’s been nothing: not a single PBI mention of WHB breakup. Derocher tweeted a track map on 6 July (2/9 bears ashore), with no updates since, but PBI’s “Bear Tracker” has not been updated since 2 July. Compare this year’s ice cover on Hudson Bay (and elsewhere in Canada) to last year on this date (14 July): quite a difference. 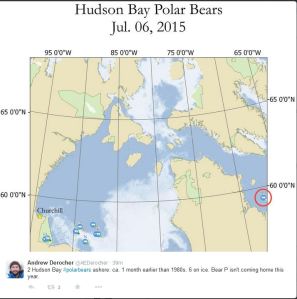 Figure 2. Tweet from Andrew Derocher noting 2 out of 9 U of A collared WHB females were onshore on 6 July 2015. Click to enlarge.