Posted on August 13, 2015 | Comments Off on Well-fed polar bears onshore at height of summer easily deterred by noise, CBC reports

From the CBC this morning, we have the report of a female polar bear and her cub paying a visit to an Nunavut campsite near Chesterfield Inlet in northwestern Hudson Bay, which is technically within the boundary of the Foxe Basin polar bear subpopulation.

These are not the desperate bear victims of global warming we have been warned about by polar bear specialists but well-fed curious ursids not averse to an easy meal if there’s one to be had. Such bears are easily deterred by a loud noise. Note this was the second visit by polar bears this Nunavut family had experienced at this location within a three-week period – two other bears had stopped by earlier. Note that ice in this region of Hudson Bay broke up earlier than usual this year yet these bears seem to be in fine condition and can expect the first fall ice of the season (freeze-up) to appear in their neighbourhood, see maps below.

“I heard a noise, an hour later,” said Putulik, in Inuktitut. “I’m thinking: ‘This time, I am going to see a polar bear.’ But when I looked out, I saw not just one, but two: the mother and a teenage cub.”

A photographer who publishes her photos online under the name Putulik Photography, Putulik grabbed her camera and started snapping photos. That’s when things took a turn for the scary: The mother bear began making her way towards the cabin.

“So I closed my blinds and started wondering: ‘What are we going to do?'” said Putulik. “I had my adult children and grandchildren in the cabin. The cub was trying to get the drying meat on the racks, and the mother bear reached toward the cabin, and started pushing against it.

“Then it heard one of the babies crying, and went back to her cub. And finally, my partner Brian shot in the air with his shotgun, and they ran away and never returned.”

Rest of the story here. Map and additional photo below from the CB C story. 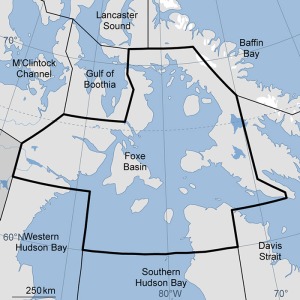 Example, from 2014, of where the first sea ice of the fall season appears on Hudson Bay (from Canadian Ice Service):