Posted on October 1, 2015 | Comments Off on Beaufort Sea swimming polar bears far from land but not very far from sea ice

Recent accounts of an encounter with a curious polar bear female and her two older cubs in the Beaufort Sea on 16 September give contradictory details about the position of sea ice at the time. The same researcher told one reporter that the ship was 240 km from land, another that it was 240 km from the sea ice, and in another account (that he wrote himself), said the ship had been far from land and sea ice. 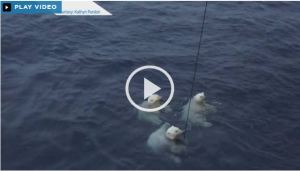 “After arriving on station and beginning work the crew noticed three polar bears in the water together which swam around to the ship when our water sampling system was nearly 3500 meters below the surface. The ship was located far from sea ice and land. Indeed, Arctic sea ice extent was the fourth lowest on record this year and there has been speculation that this imposes stress on polar bears which rely on the ice to hunt.”  [my bold]

But the maps below show that at the time of the incident (taken from the expedition web site) and the NSIDC Masie sea ice map for 16 September 2015, the ship [the CCGS Amundsen, acting as a research vessel] was actually quite close to an isolated large patch of sea ice, although further from the edge of the main pack. A patch of sea ice plenty big enough for a polar bear to rest upon – no wonder the bears did not appear stressed.

And the polar bear biologist Cullen consulted (Dr. Andrew Derocher) implied by his response that the bear was indeed far from sea ice. Reminds me of the swimming polar bear off the Hibernia oil platform off Newfoundland March 2015, which turned out to be not far from ice at all. See what you think.

Sea ice position at 16 September 2015 according to NSIDC Masie (see discussion here about the difference between the Masie maps and the daily NSIDC passive microwave NSIDC maps) vs. the Amundsen position that day (click to enlarge): 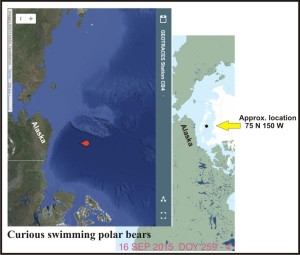 Below is the Youtube video (published 29 September 2015 by undergraduate UVic student Kathryn Purdon:

According to a CBC News report (30 September 2015; “Polar bears panic Canadian researchers in Beaufort Sea by chewing on equipment”)

“Researchers believe that the polar bears were just curious.

“They really weren’t distressed,” Cullen said of the mother and two cubs.

Cullen said some viewers have been concerned for the well-being of the polar bears, but experts he spoke to say the bears looked healthy.

“Cullen said he was surprised to see the bears swimming so far from any land, about 240 kilometres, but after speaking with Dr. Andrew Derocher at the University of Alberta he learned it is not uncommon for polar bears to go on long swims.

“Of course the concern is that, as the sea ice melts, those swims get longer,” said Cullen.

The Amundsen is part of ArcticNet and the International Geotraces Program to look at the effect climate change is having on the oceans.” [my bold]

CBC radio interview with Jay Cullen, about 6 1/2 minutes long, here, in which Cullen says the incident took place “240 km from the ice edge.”

In a similar kind of story a few weeks ago, a UK chemist insisted that “Polar bears are hungriest when scientists are busiest” which sounded good but isn’t actually true.