Posted on February 2, 2016 | Comments Off on Many otherwise intelligent people believe only a few hundred polar bears remain

The other day, I got a call from an international journalist who admitted he’d done no research into the polar bear issue but believed, based on media reports he’d heard, that there must only be about 100-200 bears remaining in the Arctic. I know he’s not alone. 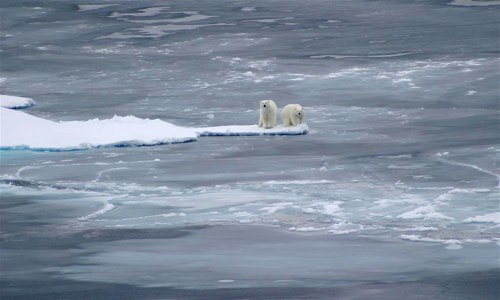 This journalist was utterly astonished to learn that the IUCN Red List assessment in 2015 put the polar bear population total at 22,000-31,000 bears and demanded proof that this was true.

Here is a summary of the Red List report, with references and links to the report:

The 2015 IUCN Red List assessment update for polar bears (published 18 November 2015) states that the global polar bear population is 22,000 – 31,000 (26,000), that the current trend is ‘unknown’ and that there is only a 70% chance that polar bear numbers will decline by 30% in 35 years (with virtually zero chance that the numbers will decline by 80% or more by 2050) – in other words, zero chance of extinction. [Detailed in a document called 22823 Ursus maritimus]. It classifies the polar bear as ‘vulnerable’ to extinction based on predictions of future sea ice decline due to global warming [similar to ‘threatened’ by other organizations] Pdf here.

Below is a list of what truly worrying species declines look like: that is, animals whose numbers have actually declined, no prophesies involved (Adler 2008).

Here I offer some perspective on the issue of what constitutes a truly “startling” population decline. Below are some actual population numbers that have been documented for marine mammals classified as “endangered” or “vulnerable”– these are actual declines, not “projections” or “predictions.” The cause of many of the declines is over-hunting but others have not yet been explained (Steller sea lion western stock; NE Atlantic hooded seal).

Hooded seal (Cystophora cristata) is considered ‘vulnerable’ by the IUCN due to actual population declines (85-90 % over the last 40-60 years) in the Northeast Atlantic (off East Greenland) that are so far unexplained. Populations in the Northwest Atlantic, however, are stable or increasing, which is probably why you never hear of this.

According to Norwegian authorities:

“In the most recent two decades [from 2007], the stock appeared to have stabilized at a low level of approximately 71 thousand. This may be only 10-15% of the level observed 60 years ago. …However, results from a Norwegian aerial survey in 2007 suggested that current pup production (15 thousand) was lower than observed in a comparable 1997 survey (24 thousand). Scientists believe that the populations decline is due to mass mortality caused by PDV (occurring among seal in the Northeast Atlantic) or Brucella (occurring in Jan Mayen hooded seals). However, there are yet no observations of carcasses or diseased animals to support this hypothesis.” [my bold]

In summary, several truly endangered marine mammal species were notable for their populations having dropped by 87% or more over several decades, in some cases leaving only a few hundred individuals or less remaining over the entire range of the species or subspecies.

Children and naive adults alike are being frightened needlessly through vague and misleading statements that lead them to believe polar bears are as rare as Siberian tigers.

Whatever the future may or may not hold for them, polar bears are currently thriving. That’s not just my opinion but the conclusion drawn by the Red List team of the world’s most respected conservation organization, the International Union for the Conservation of Nature. While the IUCN has allowed predictions of future population declines to be used in species assessments, at least they’ve limited these prophesies of doom to three generations and insisted on strict statistical guidelines.

References
Adler, J.H. 2008. An animal to save the world: climate change and the polar bear. The New Atlantis Summer:111-115. http://www.thenewatlantis.com/publications/an-animal-to-save-the-world