Posted on February 5, 2016 | Comments Off on Polar bear myths perpetuate from the mouth of stuck-in-the-past Ian Stirling

In my last post, I complained about “vague and misleading statements” made by polar bear specialists and conservation advocates. Here’s a recent example of that phenomena, from veteran polar bear biologist Ian Stirling.

The magazine of Canada’s North, UpHere, published an interview with Ian Stirling this month. The piece begins:

“No fear-mongering. No exaggeration. For Ian Stirling, it’s purely about the science.”

Yeah, well – judge for yourself. Here’s a sample:

“We have lost on average about half the sea ice that we had in 1979, which is the first year that satellite coverage of the Arctic was taken [he’s talking about September ice here]. Places like Hudson Bay are breaking up three weeks earlier than they used to and freezing up a couple weeks later. We’re going to have even more significant effects over a much wider area in the Arctic. We’re likely to lose another 30 or 40 percent, or even half of the bears that we have today in the middle of the century, and unchecked, we will likely have very few bears left at the turn of the next century. In 2100, we’ll probably just have a few small remaining pockets in the northern Canadian Arctic islands and northern Greenland.”

Stirling’s opinion about polar bears and climate change hasn’t changed since at least 2004 despite the following scientific developments:

1. Recent (November 2015) release of the IUCN Red List assessment of polar bears (Wiig et al. 2015), based on a more rigorous statistical model than the flawed method Stirling and his colleagues employed, gives only a 70% chance of a 30% decline in polar bear numbers by 2050. Not half. It also included no discussion of impending extinction by 2100 and put the global population at 22,000-31,000 bears.

2. Evidence that sea ice extent has changed in the past – that both rapid and dramatic changes in sea ice extent (more than now as well as less than now) have occurred several times since polar bears arose as a species (Cronin and Cronin 2015).

3. Evidence from the most recent study on Western Hudson Bay bears (Lunn et al. 2014) which confirmed polar bear numbers have been stable since 2004 with no trend in either freeze-up or break-up dates since 2001 (see graph modified from their paper below) – which means conditions for WHB polar bears are not getting ever-worse, as Stirling implies. 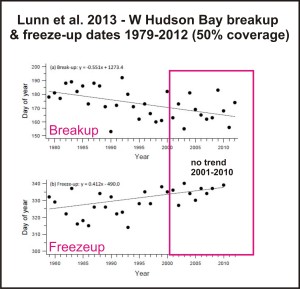 4. Lack of evidence for ever-declining body condition of WHB females, smaller litter sizes, and lower survival of cubs: Stirling and his cheerleaders keep repeating these statements but there is nothing to back them up. There has been no data published on these aspects of polar bear condition and survival since at least 2004, even though mark recapture work has been done on the bears since then. The researchers simply haven’t published the results.

5. Evidence from the Chukchi Sea that the recent long open-water seasons resulted in polar bears being in better physical condition and reproducing better than in the 1980s, when the open-water season was shorter (Crockford 2015). Less summer sea ice was actually better for these polar bears (Rode and Regehr 2010; Rode et al. 2014), not worse as Stirling and colleagues had firmly believed. It turned out they were wrong.

6. Failure to mention that over the last 50 years, thick sea ice in spring has had the most profoundly devastating impact on polar bear population numbers and cub survival (Stirling 2002; Crockford 2015). This is an especially egregious oversight, since Stirling himself was involved in much of this research.

Has Stirling forgotten the bears he saw starving in the spring of 1974 in the Beaufort Sea because the sea ice was so thick it drove ringed seals away? Here is what Stirling and his colleague Nick Lunn (1997:177) had to say about the mortality event of 1974 that they witnessed:

“…in the spring of 1974, when ringed seal pups first became scarce, we capture two very thin lone adult female polar bears that had nursed recently, from which we deduced they had already lost their litters. A third emaciated female was accompanied by two cubs which were so thin that one could barely walk. We have not seen females with cubs in this condition in the Beaufort Sea, or elsewhere in the Arctic, before or since.”

That’s two declines of 25-50% within 30 years in the same general region – both due to thicker-than-usual sea ice in spring. Reduced sea ice in summer has not had anything like this effect on polar bears in any region – not even in Western Hudson Bay, which saw a 22% decline prior to 2004 that was claimed to have been caused by early ice breakup and predicted to continue (Crockford 2015; Unger 2012), but it didn’t.

Yet, despite these scientific developments, Stirling has not changed his tune. In what way is this “purely about the science”? 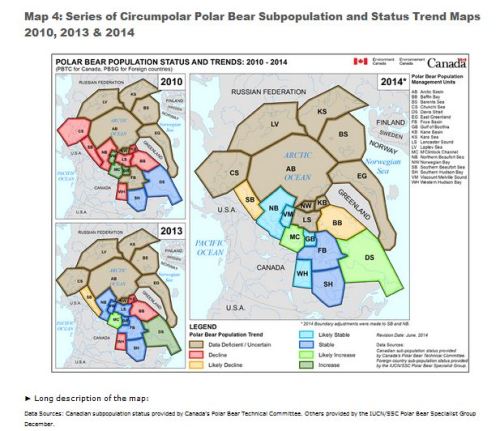