Posted on March 23, 2016 | Comments Off on Condition of S Hudson Bay polar bears varies with freeze-up only says new study

Despite the fact that the polar bears of Southern Hudson Bay (SHB) live further south year round than any others, a recent study found their average body weight has declined relatively little since the 1980s. There has been no decline in the size of the population over that time either. Perhaps that’s why there was neither a press release nor a massive media blitz when this paper came out earlier this month.

Remarkably – despite what we are told about how critical breakup dates are to polar bear health and survival in Hudson Bay – this study found that for SHB bears, the small decline in body condition index correlated only with freeze-up dates, not breakup dates or length of the ice-free season. They also found that regional breakup and freeze-up dates relevant to polar bears in this area was the day when ice cover reached 5% (not 50%).

In other words, SHB polar bears left the ice (or returned to it) when the average ice  cover near the coast was about 5%. This finding is yet more evidence that the meteorological definition of “breakup” (date of 50% ice cover) used by many researchers (see discussion here) is not appropriate for describing the seasonal movements of polar bears on and off shore.

Martin Obbard and colleagues determined that in the 2000s, females on average were about 31 kg lighter than they were in 1980s and males 45 kg lighter. But the number of bears in the population did not decline over the same period (Obbard et al. 2015), which suggests that fact is not especially significant.

Considering that males can be over 500 kg and females over 300 kg by the time they come ashore in late summer (see photo below), it’s hard to say what affect such an average weight loss might have. Previous research (Derocher et al. 1992) – on animals captured between 1982 and 1990 – suggested that the critical weight for females was about 189 kg (below this weight, females could not maintain a pregnancy). No mention was made in this new paper about finding any mature females at or near this critical point.

Some bears probably weigh much less than they might have 30 years ago while others are only slightly lighter (or the same) – and some might be heavier. If the much lighter animals are young bears (on their own for the first time) or old animals in declining health, these bears would be just as likely to die today as they would have been 30 years ago, during years with poor ice conditions (and yes, there were years in the past when freeze-up was late in SHB – see graph below: look at 1981, 1989, 1991).

Dramatic weight loss has occurred in the past in other Hudson Bay animals, even experienced mature females. The 17 year old Western Hudson Bay female pictured below was down to only 99 kg (218 lbs) in the poor ice year of 1983 (when freeze-up was very late in WHB, after a winter with heavy snow) but had regained that weight in spectacular fashion over the following spring (Ramsay and Stirling 1988), topping the scales in July 1984 at 410 kg (910 lbs). That female wasn’t an anomaly – Derocher and colleagues (1992:563) found a WHB female that weighed about 500 kg and several that were in the 350-400 kg range (which may have included the individual below).

The Western Hudson Bay female above had three cubs-of-the year in November of 1983 and weighed only 99 kg – by the following July she had either weaned those cubs or, more probably, lost them all and was pregnant again. By July 1984, she’d recovered and weighed  410 kgs. From Ramsay and Stirling 1988:614-615).

Ramsay and Stirling (1988:615) noted that in the fall of 1983, the mean weight of pregnant females had dropped to about 216 kg, from an average of 253 kg in other years. That’s a drop of 37 kg in one year. Although it was considered statistically significant at the time, it did not approach Derocher and colleagues critical point of 189 kg.

Since Obbard and colleagues do not give any actual weights (i.e., raw data) – only a “body condition index” – it is impossible to tell whether Southern Hudson Bay polar bears are at or near this critical weight point or not. I presume not or they would have said so, since that would have been a significant finding.

As a consequence, I conclude that a finding that females were 31 kg lighter in the 2000s than they were in the 1980s is nothing to be alarmed about – even if the decline is statistically significant, it does not appear to be biologically significant. 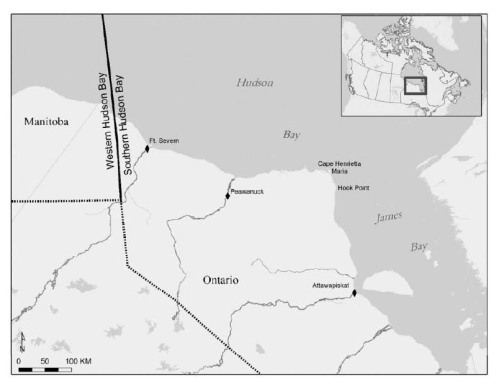 It takes only a brief look at the graph of breakup and freeze-up dates over time (that Obbard and colleagues included, see below) to see that freeze-up dates have actually changed very little since the year 2000. In fact, the latest freeze-up date in the fall occurred in 1998 – in an extreme El Nino year (day 350, about 16 December), with the next-latest dates in 1999 and 2009 (at about day 338, 4 December).

Here’s what the authors had to say about the relationship between body condition and sea ice (Obbard et al. 2016: 29):

[Here is pdf conversion table of Julian days of the year to calendar dates, if you want to look up some of the dates in the graph below). 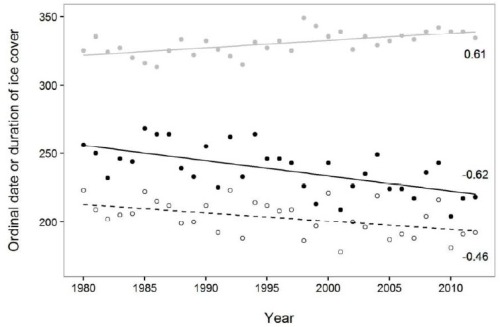 No mention is made in this paper of the excellent ice conditions experienced by SHB polar bears this last fall, when break-up was later than it’s been since 1992 (sometime after 10 August/day 222) and freeze-up in the south end of Hudson Bay was well underway by the end of November (see map below).

Back in 2013, graduate student Seth Cherry published a paper that showed the most relevant definitions of breakup and freeze-up for western Hudson Bay polar bears were 30% and 10%, respectively. But these definitions have been ignored by his colleagues (see Lunn et al. 2014, 2015), almost certainly because Cherry’s analysis showed that breakup dates specifically defined for WHB bears, had not impinged upon their critical spring feeding period.

How much do you want to bet that Obbard and colleagues finding that 5% ice cover works best as a definition of both breakup and freeze-up in SHB will also be ignored by their colleagues in favour of the meteorological definitions (date of 50% ice cover)?