Posted on August 25, 2022 | Comments Off on Inuit are concerned about public safety as Davis Strait polar bears numbers increase

An assessment of the health of Davis Strait polar bears by 35 Inuit polar bear experts was made public two weeks ago. Overall, these experts agree that virtually all polar bears they see are healthy and that the population has been growing over the past few decades, so much so that “public safety has become an increasing concern”. Mainstream media have ignored this report, as far as I have seen.

As we await the latest scientific population estimate of Davis Strait polar bears, completed in 2021 but still not publicly available (only a preliminary gov’t report and a summary graphic from the final report have been released, see Dyck et al. 2019, 2021) this new document (Tomaselli et al. 2022) provides the essential information we need. Polar bears are doing well with no notable changes in cub numbers or survival in the last few decades, abundance is up and reflects a real increase in numbers. There are so many polar bears that communities and individuals feel the need to take extra precautions in protecting themselves from bears.

Oh, and ringed seal numbers are way down: that could be a critical bit of information we won’t get from the polar bear academics.

END_OF_DOCUMENT_TOKEN_TO_BE_REPLACED

Posted on January 31, 2022 | Comments Off on Davis Strait polar bears in Eastern Canada are thriving according to new survey

Pack ice is barreling down the Labrador coast, almost certainly bringing Davis Strait polar bears with it. And according to new survey results, those bears are doing just fine: numbers are stable, bears are fatter than they were in 2007, and cubs are surviving well – thanks largely to abundant harp seals.

END_OF_DOCUMENT_TOKEN_TO_BE_REPLACED

Posted on April 22, 2017 | Comments Off on Sea ice off Newfoundland thickest ever yet another polar bear comes ashore

Amid reports that ice conditions between Newfoundland and southern Labrador are the worst in living memory, another polar bear was reported ashore in the area — just after biologist Andrew Derocher explained to the CBC that bears only come on land when sea ice conditions “fail.” 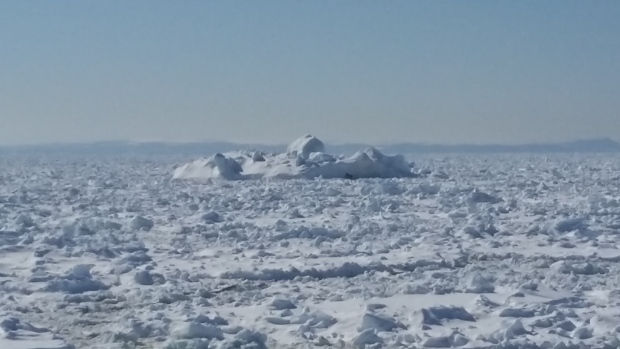 “Ice too thick for coast guard’s heavy icebreaker” said a 20 April 2017 CBC report on the state of ice in the Strait of Belle Isle. The pack is thick first year ice (four feet thick or more in places) and embedded with icebergs of much older, thicker ice. The ice packed along the northern shore of Newfoundland is hampering fishermen from getting out to sea and is not expected to clear until mid-May.

NASA Worldview shows the extent of the pack ice over northwest Newfoundland and southern Labrador on 19 April 2017 (the Strait of Belle Isle is the bit between the two): 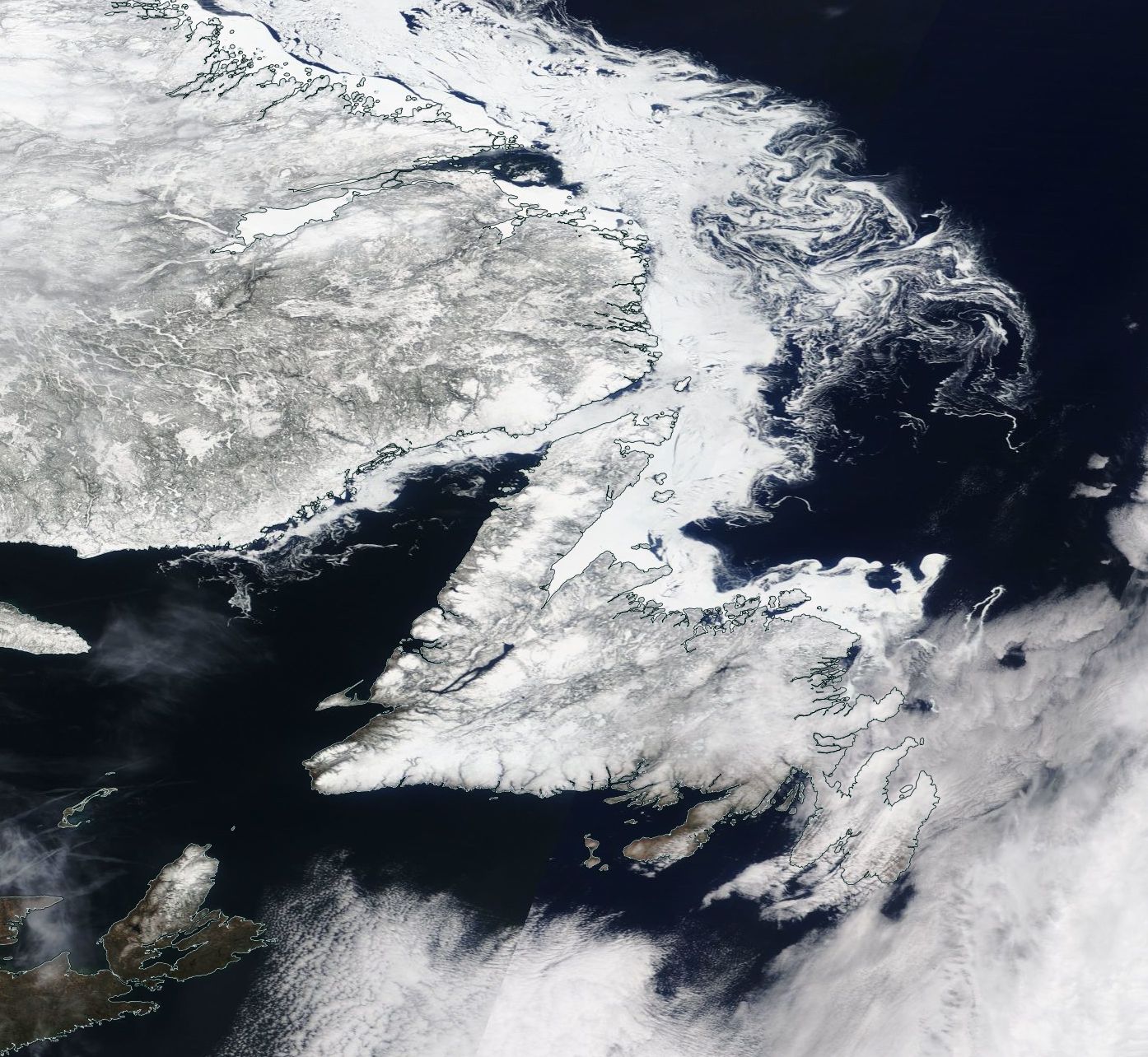 The same day that the above satellite image was taken (19 April), at the north end of the Strait on the Newfoundland side, a polar bear was spotted in a small community northwest of St. Anthony (marked below,  “Wildberry Country Lodge” at Parker’s Brook). It’s on the shore of north-facing Pistolet Bay on the Great Northern Peninsula, near the 1000 year old Viking occupation site of L’Anse aux Meadows. 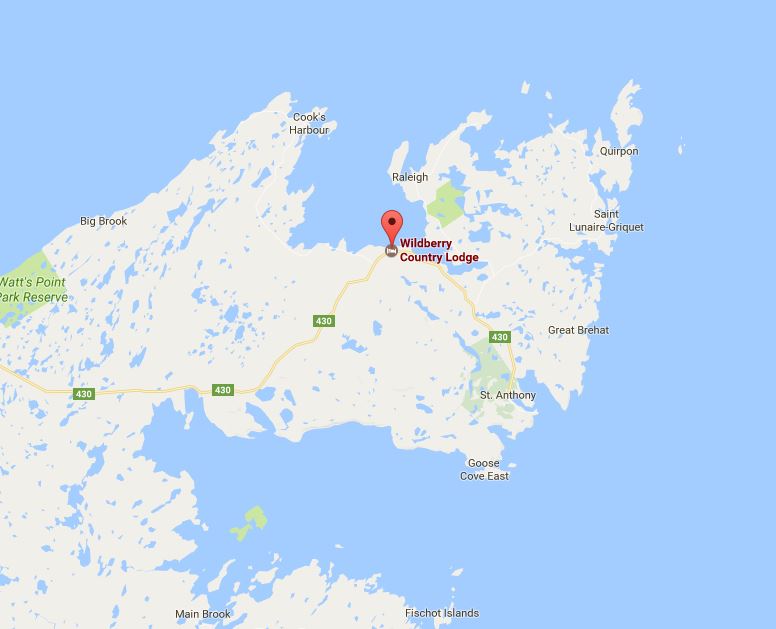 There were no photos of the Parker’s Brook bear but lots of others have been taken this year of almost a dozen seen along Newfoundland shorelines since early March: see my recently updated post, with an updated map of reported sightings. Harp seals are now abundant in the pack ice of southern Davis Strait, providing polar bears with an ample source of food when they need it most and therefore, a strong attractant to the area. 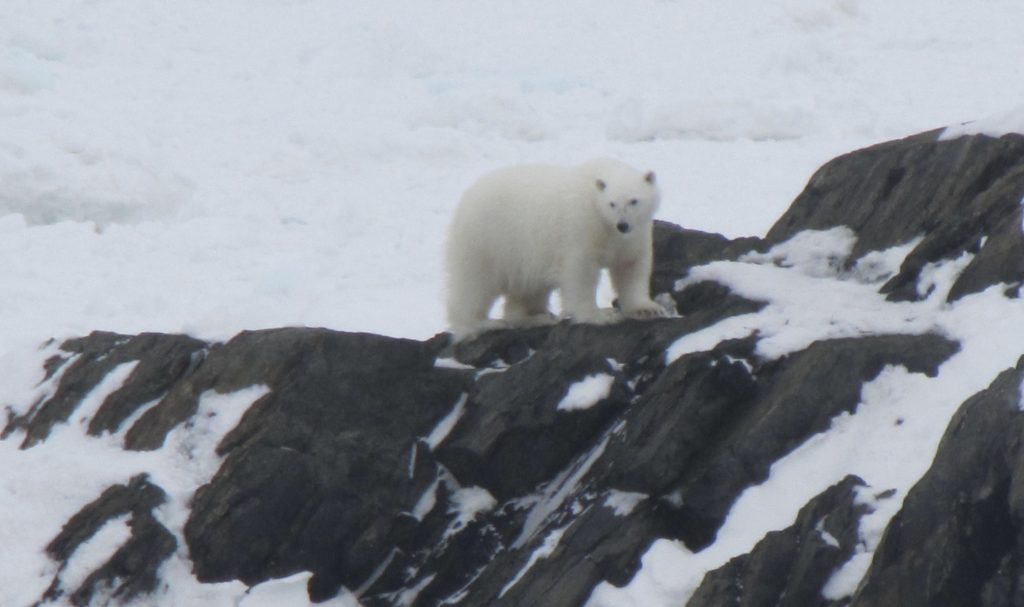 Yet, as I reported yesterday, polar bear specialist Andrew Derocher told the CBC this week that polar bears are almost always “forced” ashore by poor ice conditions. The CBC report included his tweet from 10 April, where he suggested “failed” Newfoundland ice conditions were the cause of multiple bears onshore in Newfoundland this year.

Similar thick ice conditions off northern Newfoundland (perhaps even worse) occurred in 2007, see Twillingate in the spring of 2007 below: 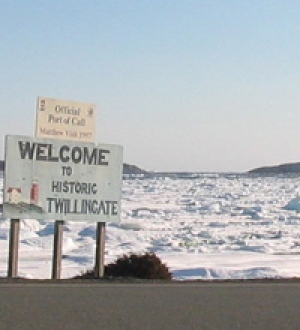 Yet, in 2007 there was not a single polar bear reported onshore in Newfoundland (as far as I am aware) but this year there were almost a dozen. And the photos taken this year show fat, healthy bears – not animals struggling to survive.

END_OF_DOCUMENT_TOKEN_TO_BE_REPLACED

Posted on February 15, 2017 | Comments Off on Polar bear habitat update for Canada at mid-February

Mid-February is the tail end of the winter fast for polar bears. Sea ice is approaching it’s maximum global extent but local maximum extents may vary. Most of the sea ice in Canada is locked in already but two regions still vary at this time of year: the Labrador Sea off Labrador and Newfoundland – where polar bears come to feed on an abundance of newborn harp seals – and the Gulf of St. Lawrence, where polar bears have not been spotted in more than 60 years.

There is almost certainly enough ice for harp seals to give birth in the Gulf this year, if the ice holds (despite some premature hand-wringing by seal biologists). There is more ice in the Gulf and off Newfoundland this year than there was in 2013 (see map below). END_OF_DOCUMENT_TOKEN_TO_BE_REPLACED

Posted on August 30, 2016 | Comments Off on Most polar bears easily deterred this time of year, lucky Labrador boaters discover

A polar bear female accompanied by a cub recently attempted to board a small sailboat anchored in a remote harbour off central Labrador – giving the two American boaters below deck a mighty big surprise. 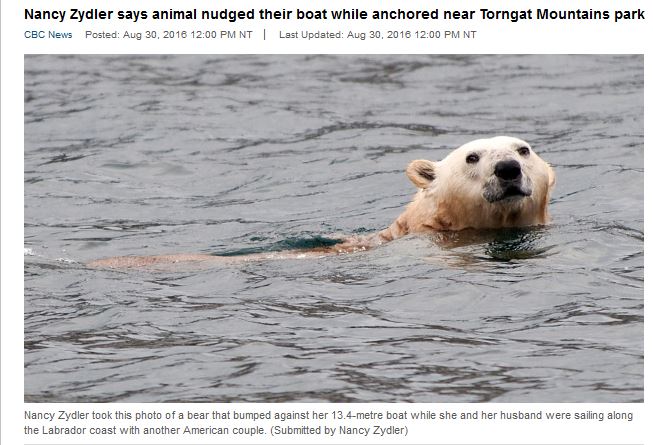 The encounter occurred south of the same national park where a much-publicized attack occurred in July 2013 (see previous posts here and here) but had a happier ending. See more below from a CBC report released this morning (based on a radio interview) and some ecological context for the sighting not mentioned by the reporter.
END_OF_DOCUMENT_TOKEN_TO_BE_REPLACED

Comments Off on Most polar bears easily deterred this time of year, lucky Labrador boaters discover

Posted on August 7, 2016 | Comments Off on Canadian Prime Minister risked being EATEN by polar bears on Fogo this year

This week (Tuesday 9 August), British Columbia’s Knowledge Network is re-running the 2015 documentary about the revitalization of Fogo Island, the Newfoundland location featured in my polar bear attack thriller, EATEN. It’s called Strange and Familiar: Architecture on Fogo Island and highlights the Fogo Island Inn, where our recently elected Prime Minister Justin Trudeau apparently spent a weekend earlier this year – gambling he could avoid a lethal encounter with a hungry polar bear when fictional others haven’t been so lucky. 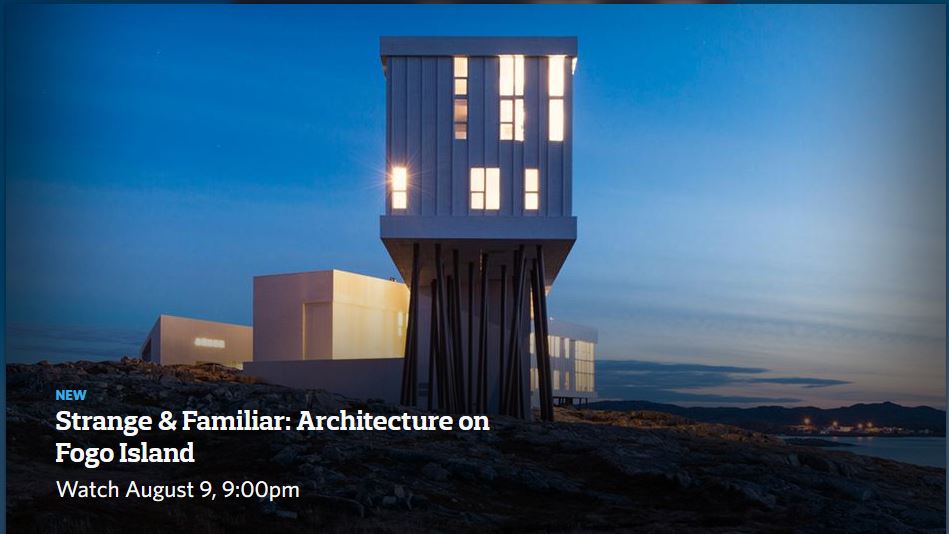 The Prime Minister and his family stayed at the Fogo Island Inn over Easter (25-28 March 2016). Did Justin Trudeau know they could have been EATEN by a polar bear at that time of year? Were members of his security detail actually prepared for a polar bear attack?

Did Trudeau’s advisors do any preparatory reading? I mean, seriously: aside from reading my terrifying science-based novel (where polar bear attacks take place right outside the Fogo Island Inn where the Trudeaus were staying), Fogo (see maps below) has a recent history of polar bear visits.

Most bears come ashore on Newfoundland in late March-early April, although this year one came ashore on Fogo in late January. Another was shot in early May this year as it advanced on an RCMP officer near one of the artist’s studios on Fogo. I guess I’ll have to send a complimentary copy to Ottawa…because next time, what with polar bear numbers increasing in that region, this high-profile family might not be so lucky. 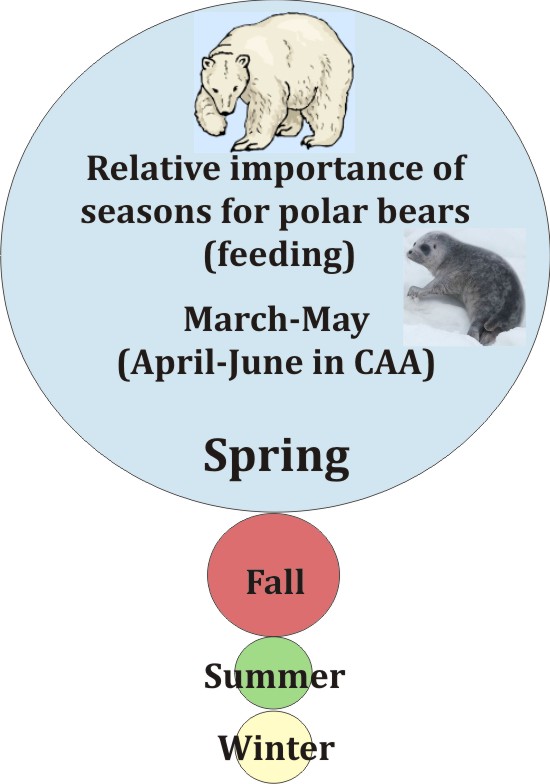 The only seals available on the ice for polar bears to hunt in early July are predator-savvy adults and subadults but since the condition of the sea ice makes escape so much easier for the seals, most bears that continue to hunt are unsuccessful – and that’s been true since the 1970s. So much for the public hand-wringing over the loss of summer sea ice on behalf of polar bear survival! END_OF_DOCUMENT_TOKEN_TO_BE_REPLACED

Have you heard the old adage, “Don’t buy trouble”? I’m thinking we could use a lot more of that attitude from polar bear and Arctic seal biologists these days.

In an interview with CBC News yesterday, Department of Fisheries and Oceans Canada (DFO) seal specialist Mike Hammill fed the fear the media wanted to hear while admitting this year’s low ice levels in the Gulf of St. Lawrence will not affect harp seal numbers significantly (7 March 2016, “Lack of ice means fewer seal pups off the Magdalen Islands this year: Researcher says impact on overall herd limited, but ice patterns over time could be concern”). 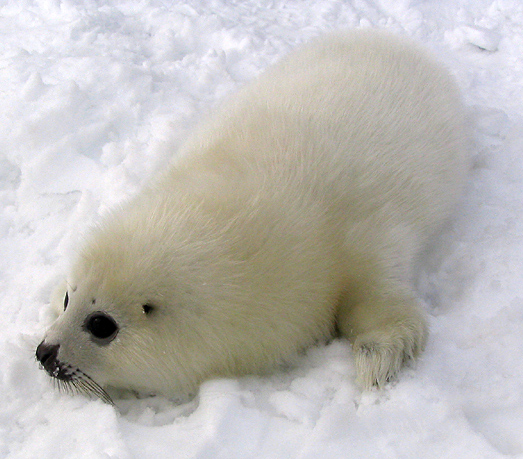 And University of Alberta’s Andrew Derocher has been busy tweeting his heart out that slightly lower than average sea ice levels this winter could mean a “challenging” spring for some polar bears – as if spring isn’t always challenging for some bears (especially young bears that are inexperienced hunters and low in the social hierarchy – meaning bigger, older bears often steal their kills – and old bears that are running out of steam).
END_OF_DOCUMENT_TOKEN_TO_BE_REPLACED

Posted on December 3, 2015 | Comments Off on Spring sea ice prediction for next year off Newfoundland: extensive ice coverage

EATEN – my new polar bear attack novel – is set in Newfoundland 2025 for a reason. I wondered: what if sea ice coverage 10 years from now is as high or higher than it has been for the last two years, with inevitable positive effects on Davis Strait harp seal and polar bear populations?

The Canadian Ice Service prediction for this region, released earlier this week (1 December 2015, see references for link), is that 2016 is set to meet my “what-if” scenario handily. Nine years to go! See the CIS expected ice coverage for 19 February 2016 below (CIS fig. 3): 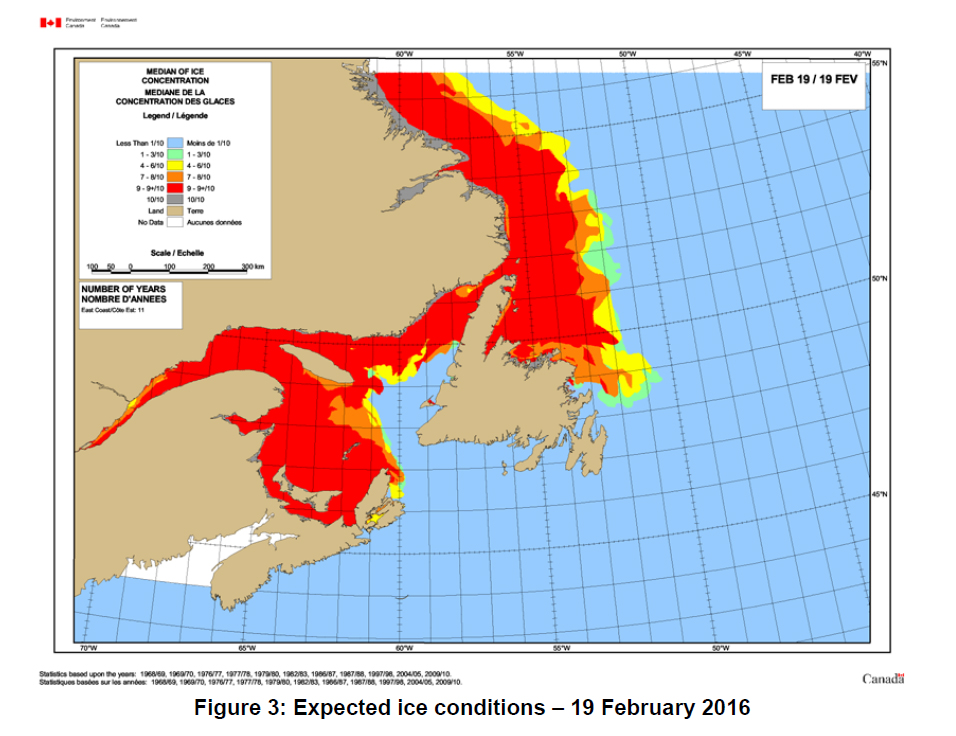 How does the above ice map compare to the last two years? At least as high or higher. Have a look below.

END_OF_DOCUMENT_TOKEN_TO_BE_REPLACED

Comments Off on Spring sea ice prediction for next year off Newfoundland: extensive ice coverage

Posted on April 3, 2015 | Comments Off on Superb sea ice conditions for polar bears worldwide during their critical feeding period

Prognosis, excellent. The sea ice hunting platform that polar bears require is everywhere and Davis Strait ice extent is the fourth-highest it’s ever been at this time of year. 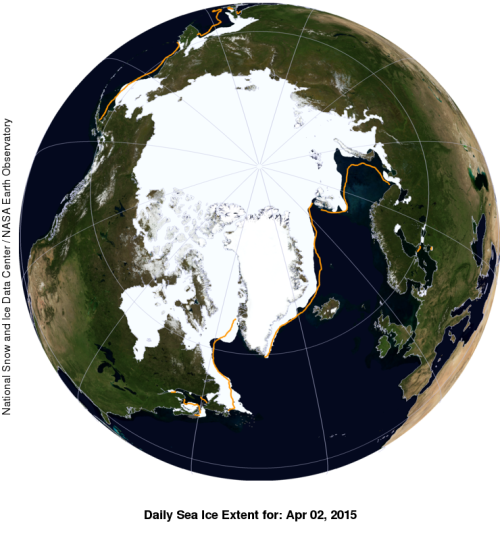 The spring feeding period is a messy, brutal business – many cute baby seals will die as polar bears consume 2/3rds of their yearly food supply over the next few months (April – June/early July), while sea ice is abundant. 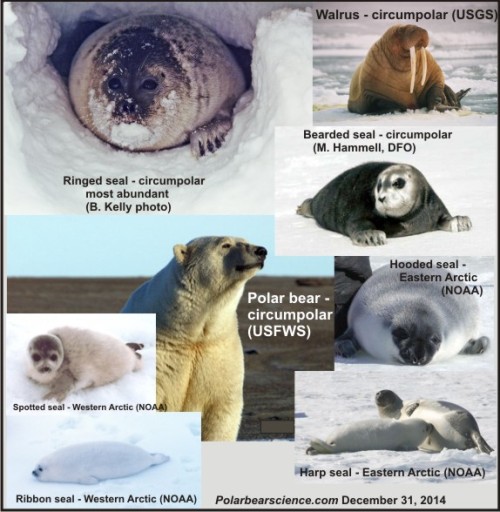 That leaves the remaining 1/3 of their energetic needs to be met over the following 9 months (most of it in late fall (late November/December) and hardly any during the summer months, regardless of whether the bears are on land or out on the sea ice) or over the winter. END_OF_DOCUMENT_TOKEN_TO_BE_REPLACED