Posted on March 27, 2017 | Comments Off on Another fat bear onshore in late winter, along Gulf of St. Lawrence north coast

Another fat bear onshore in late winter, this time along the Quebec shore of the Gulf of St. Lawrence (22 March 2017) – and this time, one of the witnesses to the sighting took some great photos. Courtesy CBC News (Polar bear makes rare appearance on Quebec’s Lower North Shore 24 March 2017). 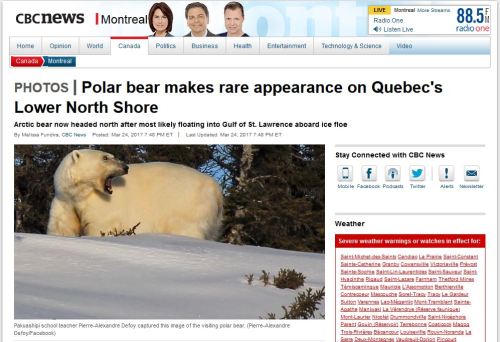 Pakuashipi, Quebec is across the northern Gulf of St. Lawrence from Port au Choix, Newfoundland, a bit west of the main coastline in an area of many small islands (see the Google map and zoom in for the best view.

For context, note that sea ice extent two days before the sighting was fairly extensive although Labrador ice will likely start its retreat north soon:

Here’s a closer look, showing sea ice concentration for that week (20 March), according to the Canadian Ice Service:

Now, take a look below at what the CBC reported about the incident (read the whole thing here).

Note they quote a Quebec Ministry of Forests, Wildlife and Parks statement that implies this incident should be blamed on global warming but makes no mention of the documented increase in population size of Davis Strait bears – which is the more likely reason more bears are showing up south of the Labrador border, where they’ve been rare to non-existent for decades – nor the fact that this bear was unusually fat for late March (in this region, harp seals are born as early as the first week in March and have been exceptionally abundant in recent years) [my bold]:

James McKinnon was out chopping wood on Wednesday [March 22], minding his own business.

The hunting and fishing guide, who lives in the remote village of Saint-Augustin on Quebec’s Lower North Shore, had no idea he was about to experience a once-in-a-decade moment.

“Some local guys said there was a polar bear on the island, only about a kilometre from the village,” he told CBC’s Breakaway.

The last time a polar bear was spotted in the area, a decade ago, it was found eating out of a dog’s food bowl and had to be shot for fear it would harm the locals.

McKinnon said a few volunteers on snowmobile kept the bear away from the mainland until conservation officers arrived.

In one moment captured by Pierre-Alexandre Defoy, a teacher in Pakuashipi, the polar bear is seen basking in the sunlight before bearing its teeth.

According to Quebec’s Ministry of Forests, Wildlife and Parks, the bear most likely ended up in the area aboard a [sic] ice floe from Labrador.

With global warming and melting ice, this phenomenon could happen more and more often, especially in spring, the ministry said.  [SJC – except this incident did not take place in spring but in late winter]

The Ministry said it last received reports about polar bear sightings on the Lower North Shore in Vieux-Fort in 2012 and, before that, in Blanc-Sablon [at the Labrador border] in 2005.

As of noon Friday, McKinnon said Saint-Augustin’s polar bear had headed away from town and had travelled about 15 kilometres, heading north.

The best image of the bear’s body (below, taken by Pakuashipi school teacher Pierre-Alexandre Defoy Wednesday, 22 March 2017, and posted on his Facebook page) shows a bear with a good layer of fat. A nice healthy bear that fortunately caused no trouble and moved on.

Thanks for sharing, Pierre-Alexandre. 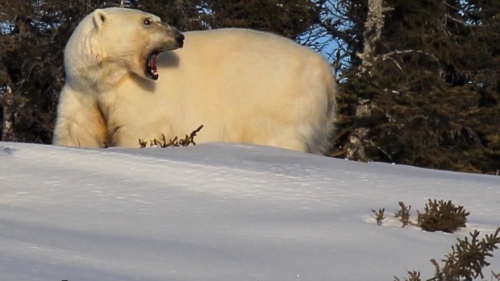