Posted on June 22, 2017 | Comments Off on W Hudson Bay polar bears won’t have an early breakup year, according to sea ice charts

There is still a huge swath of highly concentrated thick first year ice (>1.2m) over most of Hudson Bay this week (19 June 2017) and even in the NW quadrant (the closest proxy we have for Western Hudson Bay), the weekly graph shows levels are greater than 2016, when WHB bears came off the ice in good condition about mid-July. All of which indicates 2017 won’t be an early sea ice breakup year for WHB polar bears.

There is thick first year ice (>1.2m, dark green) in patches along the west coast in the north and south. Thick first year ice also extends into Hudson Strait and Baffin Bay, with some medium first year ice (0.7-1.2m thick, bright green) along the central and southern coasts of WHB.  Note the red triangles incorporated into the thick ice of Hudson Strait in the chart above: those are icebergs from Greenland and/or Baffin Island glaciers. A similar phenomenon has been noted this year off northern Newfoundland, where very thick glacier ice became mixed with thick first year pack ice and were compacted against the shore by storm winds to create patches of sea ice 5-8 m thick.

Compare the above to what the ice looked like last year at this time (2016 20 June, below). There is more open water in the east this year (where few WHB bears would likely venture anyway) but less open water around Churchill and Wapusk National Park to the south than there was in 2016:

We won’t know for several more weeks if most WHB bears will come ashore at about the same time as last year (early to mid-July) or whether they will be in as good condition as they were last year (because winter conditions may not have been similar).

But so far, sea ice conditions are not looking as dire as the weekly “departure from normal” chart (below, 19 June 2017) might suggest (all that “less than normal” red and pink, oh no!!):

In the NW quadrant of Hudson Bay (the closest proxy we have for Western Hudson Bay ice levels for data produced by the CIS), the weekly graph for 18 June shows levels are below average for that date but not by much — and virtually 50% of the region is covered in ice. So, 2017 ice levels are still greater than 2015 and 2016 in the NW sector, neither of which were especially early breakup years for the WHB polar bear subpopulation. 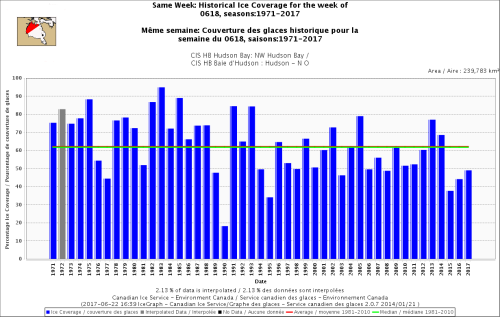 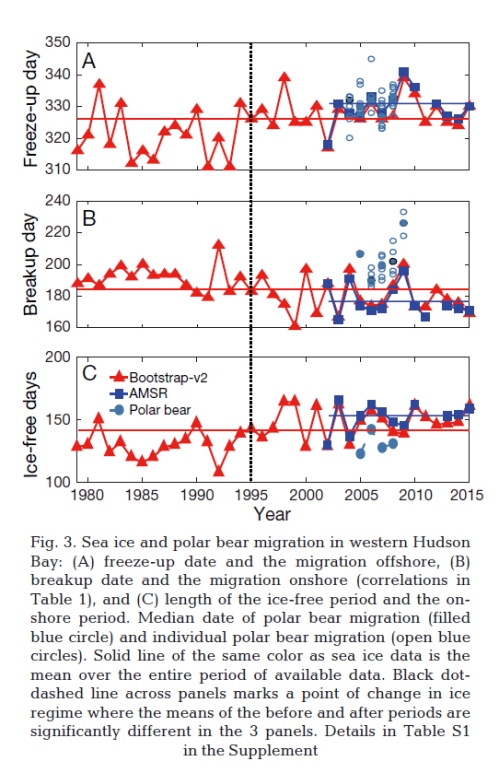 As breakup was later in 2016 than it was in 2015 — and 2017 is on-track to be similar to 2016 — there is no basis for any shrill “polar bears are doomed” prognostications for 2017 unless the bears come ashore in poor condition due to the late freeze-up last year and/or deep snow conditions over Hudson Bay in late winter (which are not monitored over the ice), as late winter Churchill storms suggest may have occurred.

In other words, if some polar bear struggle to survive this year it will be due to [the late freeze-up date last fall combined with] challenging winter conditions over Hudson Bay, not early breakup of the sea ice.

While it is certainly true that the overall trend in time onshore for WHB polar bears since 1979 has increased , the lack of a continued trend since 2001 is not what was expected or predicted, especially given the marked decline in global sea ice levels that occurred from 2007-2015 (Crockford 2017), and the predictions of how devastating such low levels of ice would be to polar bears in areas like Hudson Bay that have only seasonal sea ice.

Last year (2016), most WHB bears came off the ice in excellent condition in mid-July: