As the seasonal minimum for Arctic sea ice approaches, the media get carried away by hyperbole. Tha’t been true since 2007. This year, other outlets will need to work hard to beat yesterday’s bit of nonsense from The Independent trying to out-do The Guardian: it not only includes false polar bear facts (from sea ice researcher Peter Wadhams) but leads with last year’s controversial SeaLegacy video of an emaciated polar bear. Sea ice silly season has truly begun.

Wadhams (described as “one of the UK’s leading sea ice scientists” although not a particularly respected one) was interviewed about the small area of open water that opened up over the last few days in northern Greenland (see NSIDC photo below), driven by offshore winds (not melt). This region is the eastern-most part of the area that is considered the “last holdout” for Arctic sea ice: an immense band of very thick (4-20m) multiyear ice that stretches across the Arctic Ocean shores of the Canadian Arctic Archipelago.

The open water is expected to last a few days at most but Wadhams was absolutely breathless with dire warnings of what this might mean for the future of polar bear in the region (about which he knows nothing), rhetoric ramped up even further by the news outlet with quotes from co-director of the Grantham Institute (London), Martin Siegert, and predictions on how low the sea ice minimum might be. 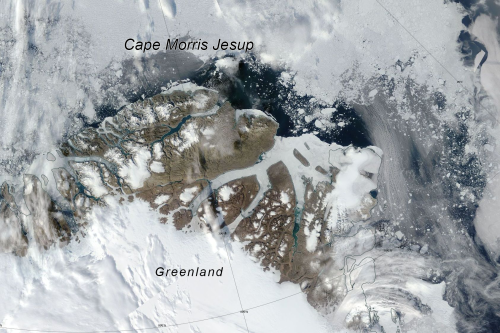 I think this is a truly spectacular example of the ignorance of scientists speaking outside their area of expertise used to mislead the public but decide for yourself.

Here is a map of the region in question. The marker shows Cape Morris Jesup. Note the location of the nearest settlement is tiny Alert (on adjacent Ellesmere Island), population 62:

The region has never been studied by polar bear researchers (Lunn et al. 2002): it is assumed by the IUCN Polar Bear Specialist Group to be visited by a few bears in-transit but not to host a permanent population (research in East Greenland (e.g. Laidre et al. 2013; Wiig et al. 2003) is done much further south). That’s because the ice is so persistently thick and ever-present, there would be nothing for polar bears to eat. It was called the “Queen Elizabeth Islands” (QE) in early models of future polar bear survival (Amstrup 2011; Amstrup et al. 2007, 2008; Durner et al. 2007, 2009) to distinguish it from the Arctic Basin proper.

The ice of this region is so thick that it’s not predicted to disappear in summer by the end of the century even under “worst case” scenarios (Crockford 2017; Durner et al. 2007, 2009). That’s why you hear the phrase “nearly ice-free” when the future of Arctic sea ice is discussed: about 1 million square kilometres of ice is expected to remain, most of it in this area.

However, this is what Wadhams has to say, in his zeal just making up polar bear facts as he goes along (my bold):

“The only zone where multi-year ice has survived is north of Greenland, but this last holdout is now opened up and moving away from the coast.”

He said it would have “serious” consequences for wildlife including polar bears, although the full extent of the damage would not be known until next spring when the animals emerge from hibernation.

“The north coast of Greenland, with its very steep cliffs, is a denning area for polar bears,” explained Prof Wadhams.

“They dig holes in the snow and come out in the spring and go hunting. But if the pack ice has moved offshore they come out hibernation and are left without an area to hunt.

“They can’t swim very far. If this becomes a permanent feature with ice away from the coast, polar bears won’t have any ice to hunt on. You would lose the polar bear habitat.”

North coast of Greenland a “denning area for polar bears”? Utter nonsense: simply not suppported by any evidence. “They can’t swim very far” is also misleading: polar bears can swim hundreds of miles (Durner et al. 2011; Pagano et al. 2012; Pilfold et al. 2016). However, since this area of sea ice is not polar bear habitat in any meaningful sense of the term, its “loss” would have virtually zero impact on polar bears.

Not to be outdone, Siegert adds his own version of polar bear false facts (my bold):

Professor Martyn Siegert, codirector of the Grantham Institute for Climate Change and Environment at Imperial College London, warned the breakup of “really thick and strong” ice in this area was particularly alarming.

“This is not just breaking up of the annual stuff, but the multi-year ice, which is highly unusual,” he told The Independent.

Indigenous populations that require sea ice for traditional fishing methods would be affected, he added, as would seals and polar bears that use ice to access plentiful supplies of fish.

This level of ignorance just takes your breath away.

Will polar bear specialist Andrew Derocher denounce this poppycock? Or, like the SeaLegacy video of the emaciated bear (about which I have more to say in an upcoming post), will he support its use because he likes the “message”?