Snow depth over sea ice in spring affects the hunting success of polar bears on ringed seal (Phoca hispida) pups, but the relationship is more complicated than you might think and there is less data on this phenomenon than you would believe. 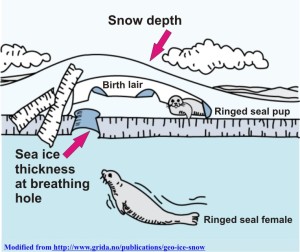 This year, it was very cold in Eastern North America, with record-breaking snow fall in some areas. Snow depth was apparently greater than average over Hudson Bay sea ice this spring but was it deep enough to have impaired polar bear hunting success?