Walruses as polar bear prey and sea ice were on my mind last night and I remembered that we DO have detailed sea ice information for 1978 and 1972 – from the sea ice atlas put together by University of Alaska Fairbanks (UAF), which has ice concentration maps for Alaska going back to 1850 — and for every year up to 2013 (reported previously here).

I’ve copied some of the ice maps below.

It is clear that ice was available close to Wrangel Island in 1972 when walruses chose to haul out on the island in huge numbers. And in 1978, there was ice present to the north of the walrus herd, but they had moved away from the ice to get to St. Lawrence Island, where they hauled out in large numbers.

This means it is more likely that food resources were the issue, not sea ice.
UPDATE OCTOBER 3 2014:

Mass haulouts of Pacific walrus and stampede deaths are not new, not due to low ice cover

Posted on October 1, 2014 | Comments Off on Mass haulouts of Pacific walrus and stampede deaths are not new, not due to low ice cover

Large haulouts of walruses — such as the one making news at Point Lay, Alaska on the Chukchi Sea (and which happened before back in 2009) — are not a new phenomenon for this region over the last 45 years and thus cannot be due to low sea ice levels. Nor are deaths by stampede within these herds (composed primarily of females and their young) unusual, as a brief search of the literature reveals.

The attempts by WWF and others to link this event to global warming is self-serving nonsense that has nothing to do with science.

There is also a follow-up post on the situation here.

END_OF_DOCUMENT_TOKEN_TO_BE_REPLACED

Comments Off on Mass haulouts of Pacific walrus and stampede deaths are not new, not due to low ice cover

Posted on July 11, 2013 | Comments Off on Chukchi/Bering Sea ringed seals doing better despite declines in ice and snow: new study 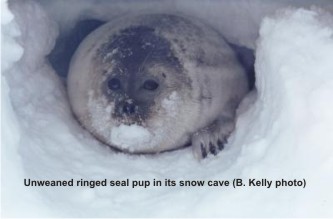 Previously, I highlighted new research results that showed, contrary to expectations, polar bears in the Chukchi Sea subpopulation are doing better – despite declines in extent of September sea ice – since the 1970s. So it might not come as much of a surprise to find that the same is true for the primary prey of polar bears in the Chukchi and Bering Seas, Arctic ringed seals (Phoca hispida hispida).

Surprisingly, less than 6 months after Arctic ringed seals were placed on the American list of “threatened” species (under the ESA, see previous post here), actual research in Alaska has shown that declines in sea ice have proven better for ringed seals, not worse.

At a presentation given at the Lowell Wakefield Fisheries Symposium in March (Anchorage, Alaska) [program and links to pdfs here] Justin Crawford, a biologist with the Alaska Department of Fish and Game (ADF&G) presented the results of ringed seal research conducted by himself and fellow ADF&G biologist Lori Quakenbush in the Chukchi and Bering Seas (posted online by the event organizers, see references below).

As for polar bears, the Crawford and Quakenbush presentation provides some very interesting details on the status of Chukchi and Bering Sea ringed seals over the last 40 years, and contains some mighty “inconvenient” conclusions that should raise some eyebrows.

I’ve summarized these details and conclusions below in point form, with a map.
END_OF_DOCUMENT_TOKEN_TO_BE_REPLACED