Posted on October 28, 2019 | Comments Off on Delingpole interview on the success of polar bear conservation & failed survival models

Tomorrow I will be giving a public lecture in Paris on polar bear conservation success and the spectacular failure of the polar bear survival models used to scare children senseless.

However, while I was in London a few days ago I spoke with James Delingpole, author and columnist at Breitbart who has recently taken to producing podcast and video interviews.

Yesterday, he posted a column summarizing our discussion, with a link to the entire podcast: “WATCH: Canadian Professor Lost Her Job for Telling the Truth About ‘Endangered’ Polar Bears.” Read it here.

END_OF_DOCUMENT_TOKEN_TO_BE_REPLACED

Posted on February 3, 2019 | Comments Off on Polar bear lecture in Calgary coming up in April – book Friends of Science event now

On 10 April 2019, I am giving a polar bear lecture for Friends of Science in Calgary (“Polar Bears: Too Hot to Handle”) alongside astrophysicist Willie Soon (“The Sun Also Warms”) at their annual climate science event. Early bird ticket discounts are available now until February 28 only (but full price tickets can be purchased until April 2). 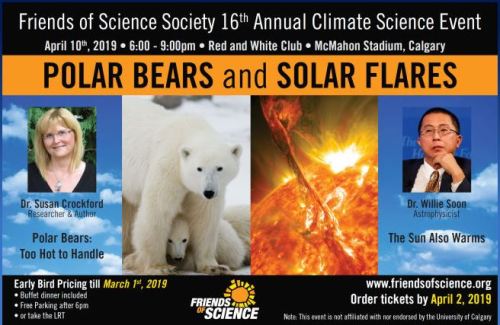 If you can, do join us. A buffet dinner is included in the ticket price.

The launch event for my new book, The Polar Bear Catastrophe that Never Happened will take place earlier in the day (noon-ish) and you are welcome to attend that as well. The book will be available for purchase at the evening lecture event and I will be more than happy to autograph your copies. Copies of my novel (EATEN) and my polar bear science book for kids (Polar Bear Facts & Myths) will also be available for purchase and signing. Details below.
END_OF_DOCUMENT_TOKEN_TO_BE_REPLACED

Posted on March 26, 2017 | Comments Off on Exposing the failed polar bear scare to a an enthusiastic and influential audience

I’ve just returned from a few days in Washington DC, where I presented the details on the global warming icon that refused to die as modeled (see my slide #12 below) to an enthusiastic and influential audience at The Heartland Institute‘s 12th International Climate Change Conference (ICCC-12).

Polar bear science got some long overdue scrutiny by a large number of people at this meeting. Not unexpectedly, a good many folks were surprised and outraged to learn how the polar bear/sea ice situation has actually unfolded compared to the predicted outcome and on-going media hype.

END_OF_DOCUMENT_TOKEN_TO_BE_REPLACED

My most requested public lecture, Polar Bears: Outstanding Survivors of Climate Change, has been hugely popular with audiences in my Canadian home town of Victoria, British Columbia, and my newly-released book with the same title (based on that lecture) promises to be similarly successful. Here are some thoughts on both.

Recently (5 January 5, 2017), I gave another free lecture about polar bears to a local non-profit organization through my university’s Speakers Bureau. I’ve been doing this since 2009, although the shear volume of requests has been much higher this past year than previously. As before, my lecture was warmly received and audience members asked questions indicating they had been listening with an open mind. A colleague I spoke to expressed surprise at that outcome, given where I live.

Keep in mind that Victoria is home to litigation-prone IPCC climate scientist turned BC provincial Green Party politician Andrew Weaver (in whose riding I happen to reside) as well as one of the many targets of fake Nobel Laureate Michael Mann and his over-sensitive ego, veteran climate scientist Tim Ball (who defends the defamation lawsuit filed against him by Mann at trial in Vancouver, B.C. 20 February 2017,  an event which defender of free speech and fellow defendant against Mann’s litigious wrath, Mark Steyn,  has said he’ll be attending). And yes, in a sort of home-town science brawl, Weaver also sued Tim Ball, but that case has not yet gone to court. Victoria is also the constituency of our lone federal Green Party Member of Parliament, Elizabeth May. Canadian journalist Donna Laframboise once described Victoria as “one of the most left-leaning corners of the country.”

So it is into this virtual lion’s den of anthropogenic global warming champions that I venture, several times a month, to enlighten adults, teachers, and students who have been left with the impression that there are only a few hundred starving polar bears left in the world.1

The secret to the kind of reception I receive – even in my town – is to present the relevant facts without emotional overtones and let audiences make up their own minds about what they think of the situation.

This latest lecture was not only well received but several audience members bought copies of my kid-friendly Polar Bear Facts and Myths that I had for sale (reviewed here by Kip Hansen).  One member came up afterwards to say he’d been dreading what he’d anticipated would be another polar-bears-are-doomed diatribe but was very pleased at my even-handed, scientific approach.

That’s why I decided to fashion my first fully referenced polar bear science book – and take it’s title – from my most successful public lecture. Audience responses over the years indicated to me that a simple summary would be an appealing approach. Questions from audience members over the years suggested which topics might need a more detailed explanation in the book. The lesson I learned from my lecturing experience was that my book needed a focused style, plenty of color images, and an affordable price.

Consider the table of contents for the new book, where each chapter covers only a few pages:

I expect I’ll get some negative fake reviews posted on Amazon for Polar Bears: Outstanding Survivors of Climate Change from the self-appointed moral-high-ground troll network (as they did for Polar Bear Facts and Myths). That’s to be expected for a topic like this. Honest criticism from readers might also be generated, of course, and that’s something all writers can expect, and should welcome.

That said, the best way to counter biased or unconstructive reviews is with honest, heartfelt reviews from readers who have actually read the book. If any of you that have ordered a copy of this book but would like to see a pdf review document in order to post an immediate review, use the contact me form at “Comments/Tips.”

My interview with Benny Peiser about polar bears, evolution and Arctic controversies

Posted on June 17, 2014 | Comments Off on My interview with Benny Peiser about polar bears, evolution and Arctic controversies

While I was in London, ahead of my House of Lords lecture on June 11, 2014 (“Healthy Polar Bears, Less Than Healthy Science“)*, I had a chat with Benny Peiser of the Global Warming Policy Foundation.

Have a listen here: “An Interview with Dr Susan Crockford on polar bears, evolution and Arctic controversies.”

I’ve been traveling for a month but I am finally home — tired and jet-lagged after a journey that took me two-thirds of the way around the world and back. More on my experiences as my energy for blogging returns.

*I shouldn’t have to point this out but I will: I was not paid for this lecture, nor for the airfare to London (I was passing through town anyway). As the timing of the lecture required an overnight stay, GWPF did pick up the tab for a hotel room and dinner, as hosting organizations for such events do as a matter of course.

Comments Off on My interview with Benny Peiser about polar bears, evolution and Arctic controversies

My upcoming lecture at House of Lords, London: how to get invited

Posted on May 13, 2014 | Comments Off on My upcoming lecture at House of Lords, London: how to get invited

Benny Peiser of the Global Warming Policy Foundation (GWPF) has arranged for me to give a lecture at the House of Lords (London) on June 11.

This lecture focuses on recent research results that have shown that polar bear populations are not responding as predicted to recent declines in Arctic sea ice. Despite the fatalistic attitude of many polar bear field biologists, real-world evidence indicates that polar bears are well equipped to survive substantial variations in their Arctic sea ice habitat and have not been harmed by recent low ice coverage. Such resilience over the short term is hardly surprising, since polar bears are now known to have survived a multitude of past climate shifts of almost inconceivable magnitude.

As the venue has limited space, interested readers in the UK may contact the GWPF at info@thegwpf.org for an invitation. They will let you know if places are still available.

Hope to meet some of you there.

PS. I will be staying near Bristol later that week with relatives (June 13-15) and could take an afternoon or evening for a pub chat about polar bears and other issues, if anyone is interested. Send me a note via the contact page above.

Comments Off on My upcoming lecture at House of Lords, London: how to get invited