Here’s a polar bear habitat update for early March: some folks are wringing their hands over the relatively extent of ice this season but ice maps show that as far as polar bear habitat is concerned, conditions are not materially different this year from what they were in 2006 or 2017. There is still plenty of late winter sea ice for polar bears needing a platform from which to hunt Arctic seals, which in some areas will have already begun giving birth to their fat furry pups (harp seals first, other species later).

END_OF_DOCUMENT_TOKEN_TO_BE_REPLACED

Arctic sea ice is spreading out quickly from its central basin summer refuge – according to this NSIDC Masie ice chart, it has already grown more than 2 mkm2 beyond the annual minimum reached in early September. Ice is already pushing south into the eastern Beaufort and the archipelago of Franz Josef Land in the Barents Sea.

Over the next couple of weeks, shorefast ice will start forming along the coasts of North America and Eurasia (see the first bits off Alaska in the 21 October CIS map below), which will eventually meet the expanding Arctic Basin pack to fill the Basin and Canadian Arctic Archipelago with ice – as it has done for eons.

The evidence from the last decade or so suggests that by the end of October, most of the Arctic north of the 79th parallel (see map below) will be filled with ice – although the Chukchi Sea (north of the Bering Strait) may not fill until sometime in November: 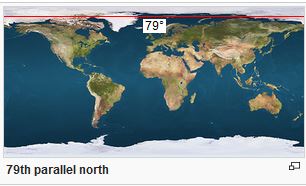 Polar bears usually resume hunting as soon as sea ice conditions permit in the fall, since it’s their last chance to top up their fat reserves before the dark and cold of winter when hunting may become next to impossible.

I’ve copied ice charts from the Masie archives for some previous years at 31 October below.

END_OF_DOCUMENT_TOKEN_TO_BE_REPLACED

Posted on September 23, 2016 | Comments Off on Polar bears seldom catch seals they stalk in summer – it’s why they fast

This short BBC video shows why polar bears are so often unsuccessful in their summer hunts – adult bearded seals are the species most often available on the ice. These seals are not only predator-savvy but there are lots of escape routes in the melting ice, and this has always been so.

Melting ice in summer is not a new phenomenon (e.g. NASA photo below from mid-July 2016) – Thomas Grenfell and Gary Maykut described the process of melt pond development back in the 1970s:

“Melt ponds reach the maximum extent shortly after the disappearance of the snow, when they may cover upwards of 50% of the ice.”

Melting summer ice has always made it challenging for polar bears to catch seals, as this quote from Ian Stirling (1974) show, based on his work in the Central Canadian Arctic in the summer of 1973 (July and August):

“There is a great abundance of natural holes in the ice during summer, anyone of which a seal could surface through. “

This is still true in areas like the Southern Beaufort Sea today (e.g. Whiteman et al. 2015): the ice melts and in some areas, disappears completely in summer.

It’s why polar bears – unlike other species of bears in summer – depend on their stored fat to see them through until the ice reforms in the fall.

[When polar bear scientists say “sea ice” or “ice” – they mean summer sea ice. Sea ice in winter and spring are not predicted to decline by 2100 to any appreciable degree and that has been true since sea ice predictions began]