Polar bear habitat update: what a difference a year makes to sea ice coverage in Canada!

Posted on November 4, 2014 | Comments Off on Polar bear habitat update: what a difference a year makes to sea ice coverage in Canada!

There is far more ice — and far more concentrated ice — in Canada this year than on this day last year. That’s good news for most polar bear populations.

[And, it turns out, more ice total this year on this date than there has been since 2001!] 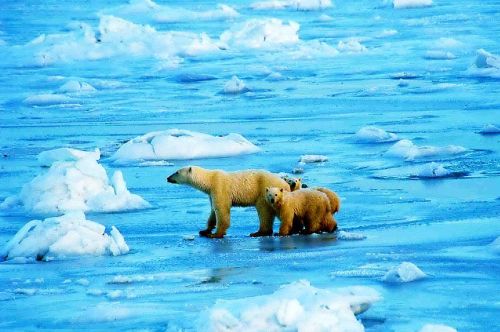 Compared to this date in 2013, there is more ice this year in Foxe Basin (yellow circle) and in the Coronation Gulf/Amundsen Gulf/Queen Maud Gulf region along the north coast (green arrow), often referred to as the “Southern Route” of the Northwest Passage.

And look at how much more “10/10” highly concentrated ice (bright white on the concentration scale) there is the Canadian Arctic Archipelago (magenta circle) this year (compared to last).

While that’s not especially good news for polar bears in the Central Arctic — ice that heavy is good for supporting maternity dens over the winter but not so great for hunting, because the ice is usually too thick to support a lot of seals — it’s good news for the bears everywhere else.