Posted on November 2, 2017 | Comments Off on Early freeze-up in progress on Hudson Bay – what a difference a year makes

In contrast to 2016, when freeze-up along Western Hudson Bay was about as late as its ever been (early December), ice is already forming along the shore of northern Hudson Bay. There is much more ice than usual for this date, indicated by the dark blue in the latest weekly ice chart below:

The ice is still thin, as the chart below indicates, but that’s how freeze-up starts. As long as strong winds don’t blow the ice away (as it sometimes does at this stage), the ice gets thicker day by day — and advances further and further off shore. Polar bears get out on the ice as soon as they are physically able, when the ice is about 3-4 inches thick (about 10 cm) or less.

Below is a video of a bear traversing that thin ice yesterday (1 November 2017), near Churchill. Is this a portend of a freeze-up date as early as occurred in the 1980s?

This is how it looks on the main sea ice chart:

At this date in 2015, there was less ice on the edge of the bay but more in Foxe Basin to the north:

And last year at this date, there was hardly any visible Hudson Bay ice on the chart:

Churchill polar bears were reported on the ice last year when it looked like the chart below: freeze–up was definitely late and bears left shore to resume hunting as soon as possible.

By the end of that week (5-11 December 2016 ), bears held in the Churchill’s Polar Bear Jail had been released, so that they could resume hunting:

To date (last week of October, week 16) this year, far fewer problem bears have been recorded than last year: 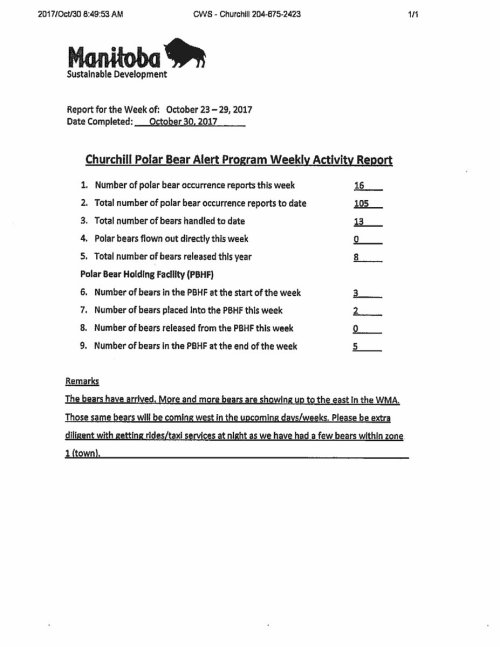 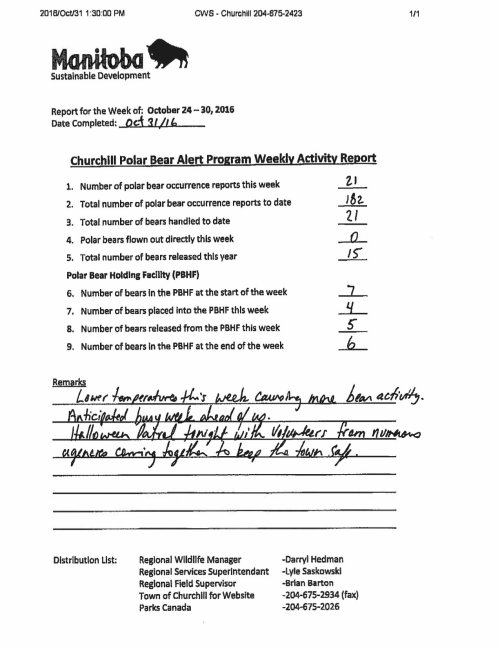