Low Bering Sea ice mostly due to south winds, no data on an impact for polar bears

Posted on April 30, 2018 | Comments Off on Low Bering Sea ice mostly due to south winds, no data on an impact for polar bears

Sea ice in the Bering Sea this winter was said to be the lowest since the 1850s, largely driven by persistent winds from the south rather than the usual north winds although warm Pacific water was a factor early in the season (AIRC 2018). But what, if any, impact is this surprisingly low winter and spring ice cover likely to have on Chukchi Sea polar bear health and survival?

In fact, research on Chukchi Sea polar bears has included so few examples of individuals utilizing the Bering Sea in winter (Jan-March) and early spring (April-May) that any conclusions regarding an impact from this year’s sea ice conditions are likely to be invalid. In short, we don’t know what will happen since it has not happened before within living memory; the opinions of polar bear specialists must be taken with a grain of salt because so many of their previous assumptions have turned out to be wrong (Crockford 2017a,b, 2018), see here, here, and here. Seals, walrus and polar bears are much more flexible and resilent to changes in habitat conditions than most modern biologists give them credit for and consequently, it will be fascinating to see how the ice will change over the coming months and how the animals will respond. 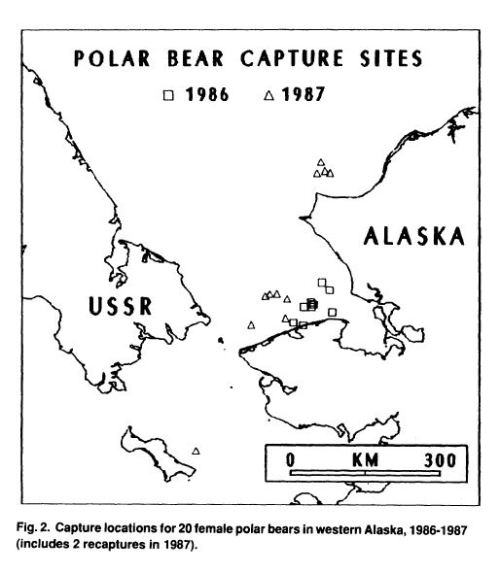 Data on polar bear movements in 1986-87 from Garner et al. (1990 Fig 3D Jan-March and Fig 3A April-May) further show only a few bears captured in the Chukchi Sea ventured south into the Bering Sea in winter and spring. 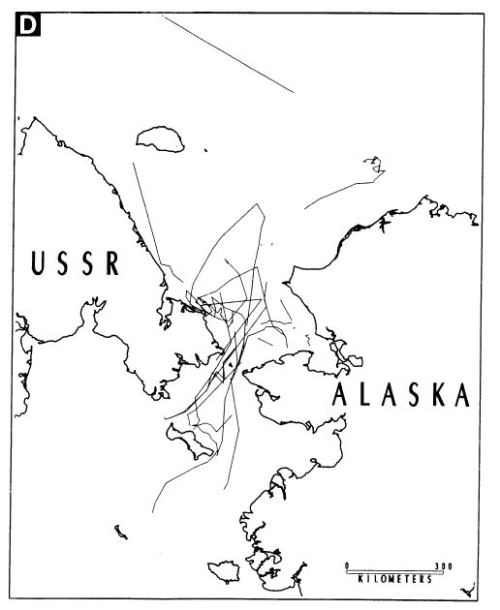 This year, there was virtually no ice remaining in the Bering Sea at the end of April and this clearly represents unusual conditions. But it is not obviously catastrophic, since there is still a lot of ice in the Chukchi Sea for Chukchi Sea bears to hunting and mate upon: 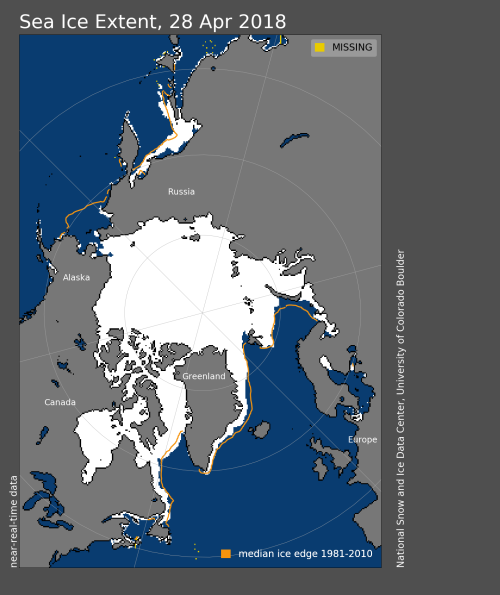 Most of the known impact of low Bering Sea ice this winter has been on humans: local hunters having to adjust their hunting schedules and polar bear specialists unable to land their helicopters safely on the ice.

Bering Sea walrus, seals, and polar bears move with the mobile pack ice and therefore any individuals that spent the winter in the Bering Sea this year (see map below) would have traveled with the ice north into the Chukchi Sea as the ice retreated earlier than usual. 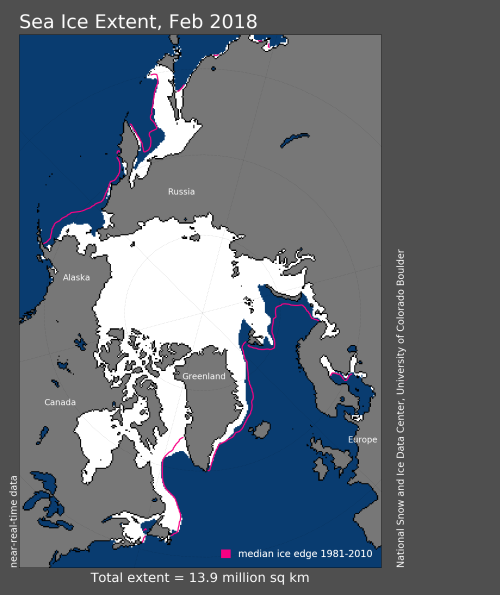 Just because virtually all Chukchi Sea bears (and many seals) will have been forced to stay within the Chukchi Sea itself for most of this winter and early spring does not necessarily mean a problem ahead. However, when people are looking for problems, that’s often all they see:

Missing sea ice in the Bering-Chukchi sea will affect #polarbear distribution. Area has been buffered from effects of sea ice loss by a huge continental shelf but that may change. Unfortunately, with such poor ice conditions, monitoring of the bears almost impossible. https://t.co/ZtRujKVrBv

The same excellent conditions for ringed and bearded seals existed last summer (longer open water season, therefore more time for the seals to feed and fatten up for the winter) as existed since 2008 (Crawford et al. 2015; Crawford and Quakenbush 2013), so seal pups should be just as plentiful in the Chukchi Sea this spring as last spring (Rode et al. 2014, 2018). This will allow most Chukchi bears to put on enough fat to see them through an ice-free period as long as 4-5 months, just as bears in Western and Southern Hudson Bay have done for decades (Castro de la Guardia 2017; Obbard et al. 2016).

There is no reason to expect that well-fed Chukchi Sea bears will not be able to endure a similar fast (whether they are on the sea ice over the Arctic Basin or on land), since they have already been thriving with a fast of one month or longer in recent years (Rode et al. 2014, 2018). However, polar bear specialist Andrew Derocher thinks that even one month of ice-free conditions will mean the demise of some Chukchi Sea bears. While he’s technically correct — some bears starve every year (usually very young and old bears) no matter how good the ice conditions — but that’s not what he’s trying to say:

Once the hunting season ends, #polarbears use ca. 1 kg (2.2 lbs) of body mass per day to sustain themselves. One month of ice-free time can be handled by some bears but not all. Proportion of population that cannot survive a fast increases sharply with ice-free period length. https://t.co/rcAQeGQ4ih

As a consequence, we shall have to wait and see what the coming months bring. Sea ice retreat in the Chukchi may stall for months or continue to decline. It may indeed be a rough year for Chukchi Sea polar bears but after a decade or more of excellent conditions, the population can likely rebound from a single challenging spring with less than optimal ice cover. As far as I know, no one predicted this year’s low Bering Sea ice conditions, and there is no reason to expect it will be repeated next year or that this is a “new normal” for the region.