Posted on February 9, 2019 | Comments Off on Polar bears have been terrorizing a Russian town on the Barents Sea since December

Since early December, a group of 52 polar bears have terrorized the Russian village of Belushaya Guba on southern Novaya Zemlya. The aggressiveness of some of the bears, their boldness in entering local buildings and fearlessness in the face of the usual deterrents has caused the local government to call a state of emergency to help the town residents. Global warming is blamed for the problem but as is so often the case, that claim does not stand up to scrutiny.

Large group of polar bears at the Belushya Guba town dump on Novaya Zemlya, Russia. From the 11 Feb. 2019 story at The Daily Mail.

Belushaya Guba is located on the southwest coast of Novaya Zemlya in the eastern Barents Sea. It is a town of mostly military personnel and their families: 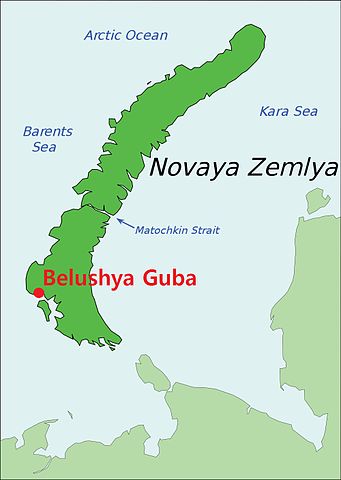 The predictable claims that this situation is due to global warming are confounded by the fact that the region has not had abundant sea ice by December in more than 30 years, yet this is the first time the town has had such a problem with polar bears. Polar bears in winter can be very dangerous, as they are often lean and desperately hungry. [except these ones are not, see update below]

UPDATE 11 February 2019: The international media have gone mad for this story and some photos are now available. Best series of photos and video is at The Daily Mail, UK (11 Feb 2019: State of emergency is declared after more than 50 polar bears invade Russian town and ‘chase terrified residents’). No new information is available on the story itself but plenty of hyperbole has been added. The photos show how fat and healthy these so-called ‘desperate’ bears are, which makes the claims that global warming is to blame for the crisis even more ludicrous (see the ice charts below). So far, the most over-the-top take on this goes to the Washington Post (11 Feb 2019: A ‘mass invasion’ of polar bears is terrorizing an island town. Climate change is to blame): they went to the most trouble to make the link to climate change and bring up the vilified ‘starving polar bear’ video that National Geographic was forced to apologize for last August and the debunked 2007 prediction that 2/3 of the world’s bears would be gone by 2050 (Crockford 2017). The Guardian‘s effort is weak by comparison, as is CNN‘s. The news outlet (not a blog) Daily Caller has some quotes from this page. Competition amongst bears for scarce natural resources in winter makes dump sites and stored food available around Arctic communities all the more attractive. When polar bear numbers are high, as they are now, this competition can get fierce. It’s no wonder the bears don’t want to leave.

The Barents Observer (9 February 2019) had the most detailed report on the so-called ‘invasion’ (which seems to have come without photos of the bears involved):

“From December 2018 to February 2019 a large group of polar bears have stayed around the settlement. There are 52 polar bears inside the territory of the village,” says Deputy Head of the municipal administration of Belushaya Guba, Aleksandr Minaev, in a statement posted by the press-service of Arkhangelsk Oblast.

Minaev says some of the bears are aggressive and have entered residential- and office buildings.

“People are scared, afraid to leave their houses. Their daily activities are disrupted, parents are afraid to let the children go to school and kindergarten,” Aleksandr Minaev, explains.

So far, Russia’s Federal Service for Supervision of Natural Resources has refused to permit shooting the most aggressive polar bears that have attacked people. Polar bears are on the Red List and have been protected in the Russian Arctic since 1956.”

Ice-map provided for the area by the Norwegian Meteorological Institute’s Ice Service from Friday shows how the Kara Sea off the east coast of Novaya Zemlya are packed with very close drift ice, while there are mostly very open drift ice and open water along the west coast where Belushaya Guba is located.

The experts now on their way to Belushaya Guba hope to find ways to scare away the bears from the settlement. However, if nothing else works to resolve the situation, shooting animals may become the only and necessary measure to ensure safety, the statement from Arkhangelsk authorities reads.

Zhigansha Musin is head of the municipal administration on Novaya Zemlya. He has been in town since 1983 and says he has never before seen such massive invasion of polar bears.”

Read the rest here. A BBC account here leaves out many pertinent details. The Straits Times report out of Moscow (9 February 2019, Aggressive bears ‘invading’ Russian Arctic archipelago) adds this detail not included in the report in the Barents Observer, which suggests the problem is more wide-spread than just this one town:

“In January, a defence ministry official said that hundreds of disused military buildings had been demolished on Novaya Zemlya because polar bears were settling inside them.”

Note that the report does not mention the body condition of the bears involved. They are not reported as starving or skinny but I think we can presume that they are definitely hungry, as are all bears at this time of year.

“Belushya Guba is located in a deep bay with the same name, within a geographical area that is influenced by warm ocean currents. The natural conditions allow year-round sailing of all types and classes of vessels with minimal cost for icebreaking support. The bay is well protected from high surf and drifting ice.”

Therefore, Belushya Guba on southwest Novaya Zemlya is influenced by the same warm currents that have kept western Svalbard free from winter ice since the early 1980s. The ice chart below is for 7 December 2005 (the earliest year available from the Norwegian Ice Service):

Not coincidentally, the fellow quoted in the Barents Observer story who said he had been in the town of Belushaya Guba since 1983 (the year after the conditions shown above), claimed he had “never before seen such massive invasion of polar bears.”

So, this winter in Belushaya Guba was different from the many ice-free winters that went before. 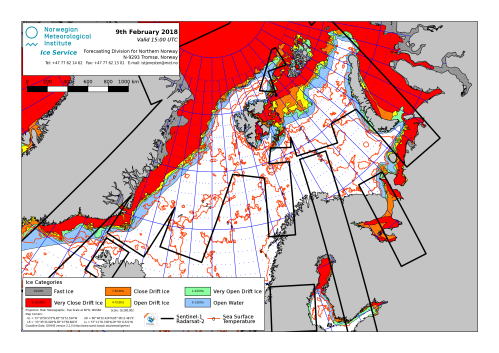 However, February ice charts that tell us little about why this year, bears ended up on the west coast in winter, when they should be out on the sea ice hunting for seals. Since the problems in Belushaya Guba started in early December 2018, let’s look at the ice conditions around that time:

By late November, there was actually enough ice for any bears that had spent the summer on southeastern Novaya Zemlya to return to the ice and resume hunting. However, it also would have allowed any bears who had been on the sea ice to come ashore, if they so desired. However, by mid-December (see below), the mobile pack ice temporarily contracted, which would have stranded any bears left onshore:

By late January (see below), the ice was back on the southeast coast (close enough for determined bears to walk there) but by then, it is likely the bears in Belushaya Guba were entrenched. They knew there was some food around and no one was shooting at them. Don’t forget that January through early March are lean times for polar bears: seals are very hard to catch during the winter throughout the Arctic and most bears are at their lowest weight of the year by the time seal pups are born (Crockford 2017). 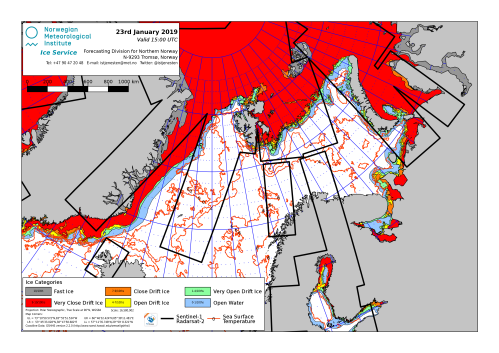 According to recent research results, despite low ice cover since 2016, the population of polar bears around Svalbard and presumably in the Barents Sea as a whole are still increasing, as they recover from decades of over-hunting in the 19th and 20th centuries (Aars 2018; Aars et al. 2009, 2017; Crockford 2017).

This incident of winter problems with polar bears and others like it reported from the Russian Arctic, almost certainly reflect the confluence of a growing human presence in the Arctic and thriving polar bear populations, not lack of sea ice due to global warming.

Recall that explorer William Barents and his crew, who became stranded on the shore of northeast Novaya Zemlya over the winter of 1596-1597, had endless problems with polar bears (back when polar bears and sea ice were really abundant). That story provides an important perspective on this year’s troubles.