The results of three recently-released studies that were not included in the last IUCN Red List assessment add more than 2,050 bears (on average)1 to the official 2015 global polar bear estimate, a point you won’t likely hear next Monday (27 February) from most polar bear specialists, conservation organizations, their cheerleaders and corporate sponsors on International Polar Bear Day. 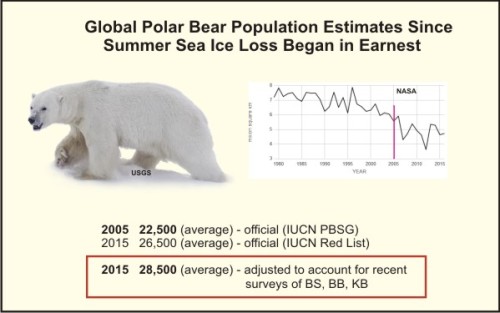 It is increasingly obvious that polar bears are thriving despite having lived through summer sea ice levels not predicted to occur until 2050 – levels of sea ice that experts said would wipe out 2/3 of the world’s polar bears (Amstrup et al. 2007; Crockford 2017 v3).

A result, I have been remiss to point out [updated 28 Feb. 2017 & included in revised Version 3 of Crockford 2017], that Drs. Kesten Green, Scott Armstrong and Willie Soon correctly concluded in 2008 was a likely outcome. In their 2008 paper that roundly criticized the USGS forecasting methods used to support placing polar bears on the US Endangered Species List (Armstrong et al. 2008:390), they concluded:

“Given the upward trend in polar bear numbers over the past few decades, a modest upward trend is likely to continue in the near future because the apparent cause of the trend (hunting restrictions) remains.”

So when you hear, “Save the polar bears, their future is grim” next week, remember that polar bears are thriving right now because those future predictions were flawed: summer sea ice is not critical habitat for polar bears. Instead of a vacuous “vanishing species” polar bear T-shirt from WWF, buy Polar Bear Facts and Myths for the kids in your life – and Polar Bears: Outstanding Survivors of Climate Change for your home or community library. You’ll be glad you did.

1. Total for all three estimate increases is 2054, or about 2050.
Barents Sea (BS) estimated at 3749 for entire region, up 42% (1109) since 2004 estimate of 2640, based on 42% Svalbard increase determined in 2015 (Norwegian Polar Institute 2015; Crockford 2017 v2) applied across the region. This is consistent with observations in 2004 that researchers found about three times (2.87) as many bears in the Russian sector than in Svalbard (Aars et al. 2009), and the stated expectation by Norwegian biologists that the population size would continue to increase despite declines in sea ice (Fauchald et al. 2014).

Added 1 June 2017: As emphasized in my paper,  although this increase in population size may not be statistically significant within the very wide margins of error used for such estimates, it is clearly not even a marginal decline, let alone the catastrophic decline that was predicted to occur.