Posted on May 14, 2020 | Comments Off on New report: Harp seal population critical to Davis Strait polar bears is still increasing

The report on the latest population estimate for harp seals off the east coast of North America was released in late March without fanfare and therefore no media attention. This was one of the missing scientific reports mentioned in my State of the Polar Bear Report 2019 released in February (Crockford 2020): results of surveys promised for months or years by early 2020 but not delivered. 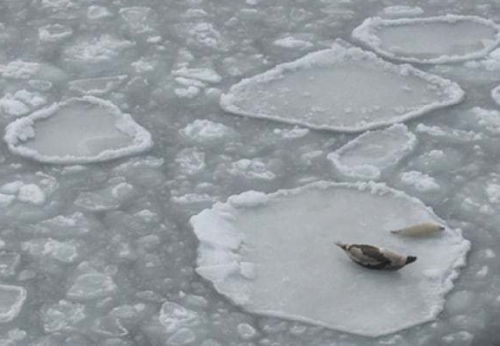 Note that the survey was done in March 2017, a low ice year for the Gulf of St. Lawrence (see discussion below) and while this may have resulted in some increased mortality for pups born there, it is also known that many ‘Gulf’ pregnant females will instead have given birth off Newfoundland and Labrador in a whelping region called ‘The Front’. Apparently, these factors were accounted for in the population model.

Highlights, quotes, and figures from the harp seal report below.

As you can see below, at 24 March 2017 when harp seal pups in the Gulf of St. Lawrence would have been about 1 week old and their mothers still with them most of the time nursing and a likely time for a survey. There was little preferred ice (thin first year ice, ca. 50cm thick, light green) around Prince Edward Island in the south and towards the Strait of Belle Isle in the north and none around the Magdalen Islands in the centre where pupping is usually concentrated:

A good ice year (2015) in the Gulf, same date in March, had much more suitable whelping habitat for harp seals, including around the Magdalen Islands (see below), and there was also abundant ice at the Front:

In contrast, there was ample suitable ice for whelping harp seals at the end of March at the Front in 2017, although there have been better years than this. Oddly enough, 2017 was the year that southern Labrador and northern Newfoundland were ‘crawling with polar bears‘ from early April and by the end of April, the ice off Newfoundland was the thickest it had been since 2007.

QUOTES FROM THE REPORT [my bold]:

The number of Harp Seal pups born in a year is estimated periodically from surveys flown in the spring when the seals gather on the ice to have their pups. Estimates of total population size are based on a population model that fits to estimates of pup production and reproductive rates and incorporates information on annual catches in Canada and Greenland, by-catch, struck and lost, and unusual pup mortality due to poor ice conditions. A long-term environmental index is used to indicate changes in the environment that impact reproductive rates and juvenile survival.

Since the 1950s, reproductive rates have shown a declining trend while inter-annual variability has increased (Fig. 4). These highly variable reproductive rates have continued although the very low rates observed in 2010 and 2011 have not occurred again. Relatively high reproductive rates were observed in 2014 and 2015 associated with a period of extensive ice coverage and high capelin abundance (the main prey of Harp Seals) and have remained relatively high for the past five years. The longer-term decline in reproductive rates is a reflection of density-dependent processes associated with increased population size. The large inter-annual variability is due to varying rates of late term abortions which appear to be related to changes in capelin abundance, and mid-winter ice coverage (which reflects environmental conditions that influence a variety of species).

The Northwest Atlantic Harp Seal population has increased significantly over the past five decades. The general decline in reproductive rates over this period, as well as a decline in size at age suggests that the population is approaching its environmental carrying capacity (K). These density dependent changes are affecting the dynamics of this population although it is very difficult to determine the exact relationship between the current population and the carrying-capacity.

Although reduced ice cover and quality are known to result in increased YOY mortality, the nature of that relationship is not known. It is also not known how ice cover and quality will change in the future. Nevertheless, as further reductions in ice coverage are predicted, poor ice conditions are likely to have an increased impact on YOY mortality. Reduced ice cover may also affect food availability and body condition of Harp Seals which, in turn, could impact reproductive rates. Again, the nature of these relationships is poorly understood and thus difficult to account for in the population assessment