Since 1971, there has been no year when there was as much ice left on Hudson Bay as there is this year at August 13th, except 1992 – the year when Mt. Pinatubo seemingly affected Hudson Bay ice levels but not any other region in Eastern Canada or the Beaufort Sea. Odd, that – see the graphs below. 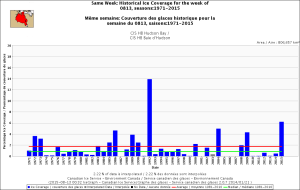 Doesn’t mean that much to polar bears, since they will mostly be fasting whether they are onshore for the summer or riding the ice – they primarily live off their fat this time of year. Still, the relative ice levels are interesting because it could impact freeze-up dates later this fall, which will influence the bears’ ability to hunt before the winter fast sets in.

END_OF_DOCUMENT_TOKEN_TO_BE_REPLACED

Sea ice in eastern Hudson Bay (bright white in the map below) is more concentrated than at this time last year and similar to the ice found in the Central Canadian Arctic.

There is more concentrated ice (10/10 concentration) in the east side of the Bay than there was in 1992, a heavy ice year blamed in part on the eruption of Mt. Pinatubo (Chambellant et al. 2012) that resulted in the latest breakup date for Western Hudson Bay since 1991.

END_OF_DOCUMENT_TOKEN_TO_BE_REPLACED

Posted on August 7, 2014 | Comments Off on Foxe Basin and Hudson Bay have more than average polar bear hunting habitat

This is shaping up to be a banner year for polar bears in Foxe Basin (central Canada), with more ice in this region than there’s been since 1992. Hudson Bay still has a large patch of thick first year ice, more than there has been at this date since 2009, which was a late breakup year.

Ice maps and charts below tell the story.
END_OF_DOCUMENT_TOKEN_TO_BE_REPLACED